If you haven't weighed in yet on our current poll to determine the next custom heroclix I'll commission, please do. For those of you who are new here, below is a rundown on those candidates, their past history on this blog, and why they are on the list. 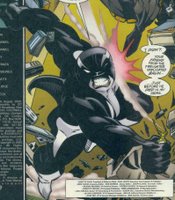 Orca the Whalewoman. Batman has fought some stupid villains in his day, but former G.I.Joe scribe Larry Hama was determined to surpass them all with the likes of Allie the Gator Girl and Orca the Whalewoman. Fan outrage was off the charts and Orca got Hama fired. The now legendary Orca the Whalewoman symbolizes the power of fan feedback and the internet as a medium for fandom. But she looks really cool and would be fun in an Aquaman-centric game. 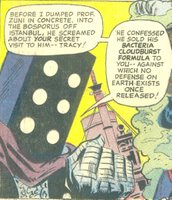 Dr. Domino is a character so ludicrous that, although he appeared in only one Wonder Woman story, the Absorbascon once devoted an entire week to him. Crazy Bob Kanigher created him out of whole cloth to throw at Wonder Woman right after she regained her powers and went to work at the UN. Dr. Domino personifies the creativity of "Crazy K", is the patron saint of all object-headed villains, and represents the position that things don't have to make sense in order to be entertaining. He the DCU's closest equivalent to Dr. Doom.

The Red Bee. If that name doesn't make you smile or sigh, then you're not a DC fan, folks. The Red Bee actually is the creation of another comic book company, whose characters DC bought en masse at a fire sale. For the most part, he's no sillier than the better known Green Hornet, but once you've used a trained bee named "Michael" as your sidekick, it's hard to recover the public's respect. The Red Bee teaches us that, in comic books, it is better to be remembered for being ridiculous than not to be remembered at all.

The Mist is the arch-enemy of the most dramatic of all heroes, the Golden Age Starman. The Mist is a testament to the power of a strong visual (the floating head) combined with over the top Republic Serial villainy. The Mist shot his own daughter dead while she was holding her baby and reminds us that pure evil never goes out of style. 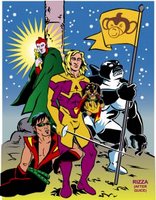 Scipio: Sword of the Absorbascon is our parody of the controversial forthcoming series by Kurt Busiek, Aquaman: Sword of Absorbascon. Sorry, Kurt! It's all in good fun.... besides, the dog looks really cute in a cape. The Sword stands for the idea that "anyone can criticize; the challenge is doing so in an entertaining way". 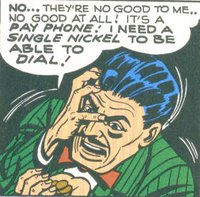 Joe Coyne, the Penny Plunderer, is seen here at what is clearly not his finest moment. Three-time loser Coyne went round the deep end one day and decided to base all his crimes around pennies as a theme. For a couple pages, Joe actually gave Batman a pretty hard time, but was finally undone by his own obsession, yet another victim of comic book irony. But you know that giant penny in the Batcave? That's Joe's. Just goes to show you, it doesn't matter what your thing is in life, if you go all the way with it, you'll have an impact. Or go to the electric chair, like Joe did. 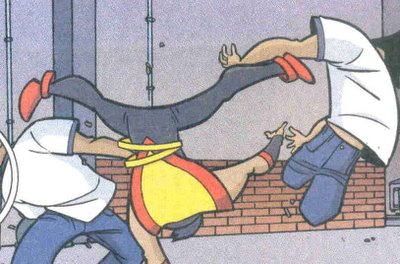 Breakdance-fighting Vibe (with pop-and-lock action!) is our totem character here at the Absorbascon. A Puerto Rican kid from the Detroit ghetto, Vibe could shatter concrete with his vibratory powers and hearts with his rakish charm. Despite a bad background and environment, he had an irrepressible joie de vivre, but it didn't save him from a tragic, lonely, meaningless death, the first Justice Leaguer to die on duty. Vibe stands for all potentially great characters doomed by the circumstances under which they are introduced.
Posted by Scipio at 2:51 PM

I had to vote for the Mist - if only because I'd love to see how you could do a HeroClix figure for him.

And, really, who doesn't love the idea of a giant domino ruling the battlefield? Dr. Domino is a must-have.

Frankly, I'm suprised that there isn't an actual Red Bee figure - he's been the subject of bad jokes and ridicule at DC for at least the last 15 years - the least they could do is give the man a posthumous HeroClix figure.

The Red Bee has trained bees in his belt buckle.

Why is there even a debate here.

His awesomeness knows no equal.

Has to be Dr. Domino

For the record, if it's Dr. Domino it will be going on a Doctor Doom dial.

A Red Bee would go well with Black Condor.

Remember, you can vote for more than one!

I voted for Orca, Scipo: Sword of the Absorbascon, and Breakdancing Vibe. They just screamed must-have to me, for some reason.

I voted for Dr. Domino. Easy choice for me.

I think all the people voting for Breakdance-Fighting Vibe are swayed not merely by the character's merit, but by Scipio's well-documented passion for the hero. The playing field feel tilted in his favor.

I also vote for the red bee.

You know,(tangent alert), in the 60s JLA/JSA teamup that occurred during the "go-go check" era at DC,they gave some of the JSA characters gadgets to make them more "super", I guess. So, Dr. Mid-Nite (who already has an owl, the best gadget there is) got a "cyrotuber" (which also appeared in an issue of FLASH) and Sandman got a gun that created glass and concrete (sand -- get it??). I always wondered how they would have similarly updated the Red Bee had he been a JSA member in good standing.

I had to vote for Joe Coyne.

Because he has the power of a giant penny. You can't beat that.

Scipio: Sword of Absorbascon would be awesome but I need to see that Dr. Domino Heroclix!

Dr. Domino would work pretty well as a major villain for a Sword of Absorbascon series. Imagine him reinvented by Grant Morrison. Creeepy.
And give him some pals.
Maybe Dr. Twister.
Or Dr. Risk.

Mid-Nite got a _cryotuber_? As in, a frozen potato? Or, I guess, something that freezes things, which I suppose could include potatoes? No need for that crap. Although it now occurs to me that I can't really think of any DC heroes that use ice since, well, Ice died. Several villains use it to good effect, but...hmmm. Maybe Tempest counts.
Anyway, back to topic: I was kind of surprised to see that Vibe was even up for vote; I'd assumed that Scipio had rejected the first eight prototypes Totaltoyz built for him on the grounds of "insufficiently happenin'" or maybe because Totaltoyz, in a fit of genius craziness, was making a "bobblehead-only-via-the-waist" one-of-a-kind Clix. And so I voted for Dr. Domino because he is easily the best DC villain in history.

Thinking about it now, Vibe should have two sculpts: since this one is designated "Breakdance-Fighting Vibe", clearly he should be supported by one hand, body horizontal with legs kicking up. The other would be Vibe in his classic "I'm Blasting You" pose, both feet firmly planted and both hands straight out from the shoulder, palms down. Also this version would be scowling. The breakdancing one would be throwing a rakish grin out. And now I've almost talked myself into ordering one of these, despite the fact I don't play 'Clix.

"And give him some pals."

Actually, I picture him hanging out with the Eraser...

Remember; I already have a Vibe clix, in battle pose. This is for whose breakdance fighting; but, yes, it is difficult to capture the glory of Vibe's dancing in ANY medium.

People, ou are much wiser than me.
I hereby bow to your superior knowledge.
The whole day I was phantasizing about Doc Domino and a Morrison-written Superman/Batman-comic. Doctor Domino... pile after pile, the elegant pattern of entropy..
I even had to put his image up on my blog.
Scipio is my prophet.

So many good choices... in the end I went with The Mist since that's the character I'd love to see a real Clix made for.

But Breakdancing Vibe and Scipio: Sword Of Absorbascon are getting votes too.