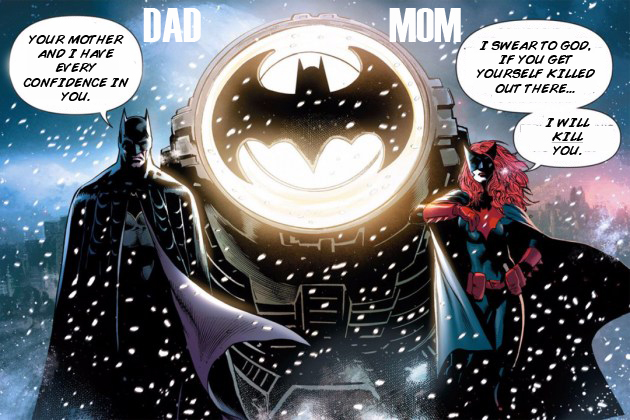 I WILL HAVE THE TRUTH

One of the aspects of ancient mythology that I enjoyed studying the most was mythic syncretism. It's the process which variant versions of a myth meet, interact, and eventually synthesize into one broader but unified myth.

Mythic syncretism is an exciting literary process and one that stretches beyond the tastes of individual authors and audiences; it's key to making sure that stories are not ephemera but contribute to the evolution of myths that can last across time.  Much of what we take as original, essential characteristics of our comic book characters is in fact the result of the syncretism process.  One of my earliest posts was about how the Mad Hatter as we know him today is the result of such syncretism.  Syncretism is why I don't freak out as much as other fans do when the television or cinema version of some hero's story "isn't right" and doesn't agree with canon. Well, of course, it doesn't.  If it did, there would be little reason to make it.  Maybe it will contribute some new wrinkle or viewpoint to the myth. Maybe what it does will be too out-of-line, and be rejected; but even that contributes to the reaffirmation of the existing myth.


It's a fascinating process, as if entire civilizations were individual authors trying to establish a continuity that encompasses different and sometimes contradictory stories about particular characters or events. It often reveals what the purpose of the myth itself is, which elements are most essential to it, and sometimes makes the story a more universal one, accessible to a broader audience.

Very much as DC is trying to do right now. The writers (and the characters they are writing) are trying to reconcile divergent sets of stories (the New52 DCU and the Post-Crisis DCU...maybe the Pre-Crisis one as well).  And nowhere in the DCU is that process being embraced for what it is more fully than in--appropriately enough--the mythology-based Wonder Woman Rebirth #1.

Wonder Woman quite literally address her realization that she has more than one backstory: "why does my story keep changing?"  Vowing to get to the bottom of it, she repudiates her recent characterization as a God of War.  She crushes the Helm of Ares (which should not be doable even for her) and points out the first casualty in war is....the truth.  This, along with her vow to uncover who has deceived her and why, is a unequivocal reaffirmation that 'truth' rather than 'war' is the core concept of the character.

I have to note that 'truth' being one of Wonder Woman's  core concepts is NOT original to the character.  If you read her Golden Age adventures, you'll see that the core concepts are ones of aggression/submission and love/hate.  What we now call 'the lasso of truth' was in fact a lasso of CONTROL  Because 'submission to a loving authority' was the concept that Wonder Woman's creator, William M. Marston, thought of as being at her core.  History had a different idea, as it turned out, and through various other post-Marston versions of her, Wonder Woman became about truth; it was a result of syncretism.

In the Superman books, Rebirth is an issue of responsibility.  Details of recent history be damned; this looks like a job for Superman and he's going to do it, and chance the consequences, because Superman is a man of action.

In the Batman books, Rebirth is a mystery.  Batman and his fellow detective the Flash intend to find out which thief stole history from the DC and right that injustice.

In the Wonder Woman books, Rebirth is matter of myth, of figuring out which version of her story is true, because myths matter.  In the fashion of Greek myths, Wonder Woman speaks about concepts in a personified way, e.g., "the lie is afraid of me" and "hostility, the child of fear".  She vow to "find the source of the deception".  My hope is we are seeing the reintroduction of the perfect foe for Wonder Woman; not Ares God of War (because Wonder Woman has always been quite willing to do battle for what is right), but rather Deception God of Lies.

In any case, I am for now, definitely along for the ride.  Because this is a Wonder Woman that works for me.

But the water is REALLY well drawn...

There are a great many words in Aquaman Rebirth #1.

The dialog? Yes, dialog is necessary. But the bulk of the words in Aquaman #1 is crammed into a seemingly endless stream of voiceover boxes that the writer is trying almost desperately to use to convey all possible information and viewpoints about Aquaman (presumably for new readers).

There are a few problems with this approach.

I applaud the reintroduction of Atlantis's 'lower castes' as (sometimes terrorists) foes of the rapprochement with the surface world.  It's a realistic problem and one that only Aquaman can deal with.

I decry the characterization of Mera as unfamiliar with surface culture and unwilling in her role as ambassador to it.  This precisely NOT what was show in the previous two issues.  She lives in New England; she should already know what 'chowder' is.

But Aquaman himself is in good character and I am looking forward to seeing where this renewed series goes.

What madness is this?!?!

What dark and sinister magicks are responsible for this horrible and surely unnatural occurrence?  Does Green Arrow have some 5th dimensional imp-fan I don't know about who could be behind it?

90,000 copies is not within reason, however.  That's a level of communal insanity generally not found outside horror/scifi movies.  As in, copies of Green Arrow are how the pod-people replicate or something.

Why is this happening?  It's certainly not the writing. I've read Green Arrow #1, and, well, it's still Benjamin Percy writing it and most of what that implies.  The supernatural angle seems to have been tamped down pretty strongly by editorial. Ollie, for example, doesn't turn into a werewolf even once.  But there is a band of improbably drawn underdwellers snatching up the homeless through improbably large sewer openings to sell them to the highest bidder.  I hope they spend some of that money on tanning salons and gym memberships.

The tonal shift of the comic into SuperLiberal Social Justice Crusade is brutal and heavy-handed.  With way too many words in boxes.  Ollie's behavior is foolish and naive, Dinah's behavior is caustic and critical, the budding of their relationship seems inappropriate and overly fast, and there's an adorable moppet that brings them together likes it's a date night romcom.

And, whether Geoff John's thinks it's traditional or not: the goatee (still) looks stupid and makes it completely unbelievable that Ollie could possibly maintain a secret identity.

Many years ago, I gave myself a reading project.  I was raised to be a big fan of horror movies and the like (my mother's thesis on the symbolism of the rolling eye in Final Destination 5 is impressive).  So I decided that it was important that I be personally familiar with the original literature on which the movie monsters of the 20th century were based (Dracula, Frankenstein, Invisible Man, Phantom of the Opera, et al.).  So I read ALL of the original stuff. Only to discover....

it was all terrible.

So, while I didn't enjoy it much, I did reach a conclusion. It's myth of these characters that is appealing rather than any particular story of theirs, including their initial one.  The strength of their underlying concepts is so great it can withstand (repeated) poor execution.

So, too, Green Arrow.  A rich guy who suddenly realizes he's kind of a spoiled jerk and decides to help out the less fortunate as a vigilante while still managing to be a cocky wiseguy?  That's the Robin Hood (or Zorro) story right there and it's a strong myth in Western culture.  People have a need for it and it's why Arrow does so well on television.

People are responding generally to Rebirth, DC's return to the roots and core concepts of its iconic characters.  It's natural that the response is going to the strongest for characters that were most off-track and that definitely includes Green Arrow.