A Fistful of Pennies 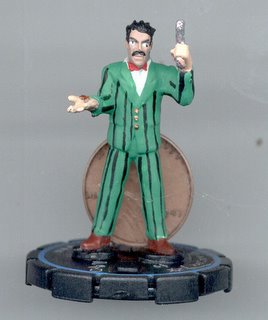 Joe! I love this man, and I don't care who knows it! Crazy Joe Coyne, the Penny Plunder; who else could nearly kill Batman armed only with a roll of pennies?

THIS is the guy John Astin should have played on the Batman TV show. Joe's the archtypal themed villain. First, his name sets him up (what psychologists call "the Bivolo Syndrome"). Second, he suffers childhood theme-based humiliation (harassed and in trouble with the law for pitching pennies), repeated in adolescence (penny-ante poker games). Third, as a adult, the coppers catch and jail him twice because he slips on some pennies or some such nonsense.

Like any good Gotham criminal, Joe goes round the bend and decides to make pennies his "crime symbol".

"Pennies...and coppers! They did this to me! Pennies...coppers...copper pennies! I hate them all! When I get out, I'll get back at coppers and pennies! I'll fight coppers--with pennies! Every job I pull will involve pennies! My crime symbol will be PENNIES!"

Only in Gotham does a phrase like "my crime symbol" require no further explanation.

Joe actually works his theme really well, eluding and even besting Batman for a while. Oh, and just because he has a "silly theme", don't think he's light-hearted; Joe kills quite a few people in his one story. But, like the dumb cluck he is, he shoves Batman and Robin into a hastily improvised death-trap, which allows them their most ridiculous escape ever.

Totaltoyz indulges people who love old-fashioned characters like Joe, and went all out on this one, putting pennies in Joe's fist and even adding behind him a 1947 penny taken from his father ("Shut up, old man! The heroclix gods do not care if it's the first penny you earned or the last one you have left. Back to the attic with you!"). Joe sits on an Experienced Harley Quin dial from the original DC Heroclix set, "Hypertime". I'll be using him as Two-Face's sidekick, ya see...

Which I sure he would have been, eventually. If it hadn't been for the electric chair.
Posted by Scipio at 7:03 AM

*And* the penny in the back ground!

If it had been up on a stand - to frame his head like an Orthodox Icon - I would be worried that Dale was tuning in on my thoughts. (Or maybe Dale should be worried...)

First, his name sets him up (what psychologists call "the Bivolo Syndrome").

There's actually a word for that. It's called a "charactonym"; when a fictional character is a given a name that indicates their character traits. Comic books are rife with these: Edward Nigma, Ben Grimm, John Henry Irons, etc.

Whoa! Batman hit him so hard his eyes have permanently boggled!

Thanks for catching that, anon! I'll have to fix it. I didn't paint Joe's eyes; they came that way. I used the head from an Ultimates Punisher; all I added was the moustache!

Don't fix it, I was kidding. It looks great.