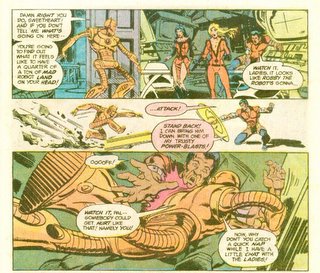 No, not that Tempest; the other one.

Joshua Clay, like apparently all black American characters in comic books, came from the mean streets of somewhere and got involved in gangs. He got in trouble with The Law, and was given the choice of jail or enlisting in the army, a concept so wrong I scarcely have the strength to discuss it.

Anyway, he joined the army, served in Vietnam, became a medic, under duress discovered his "trusty power-blasts", and deserted. Busy guy.

He was a "reluctant hero", a schtick black characters often get stuck with, either because it's supposed to be more realistic or because black people are supposed to be more selfish than white people; who can say? But here he's seen at his most gung-ho in 1994. Hey, I'd be reluctant too, if I had to wear that outfit.

Note from his dialog that, like most underprivileged urban black gang members, Josh was a big fan of "Forbidden Planet". Gee, you'd think that comics were written by geeks, wouldn't you?

I really liked Josh. Grant Morrison, oops, I mean the Chief shot him to death for no apparent reason in an issue of Doom Patrol. Grant Morrison's too good to use other people's characters, you see, unless he changes them wholesale....
Posted by Scipio at 4:37 PM

Scipio, I'm pretty sure that page isn't from 1994. Isn't that from the Showcase issue that introduced the "New Doom Patrol" from the late seventies?

Tempest was a mismatch for the DP: his powers were too standard-issue superhero. His only "freakish" aspect was his costume. Man, those lapels.

What the hell is it with dogpiling "relevant" things to black heroes? Ye gods. Don't forget that he was wanted for murder, since in Vietnam he accidentally fried his CO with his newly-emerging powers to stop what I'm almost positive was a My Lai-style massacre.

May the ghost of Robert Kanigher save us all from "relevant" comics.

How do you explain Morrison's JLA run, where he used the current versions of all the iconic characters of the DCU, without changing so much as a hair on their head?

Hmmm, I suppose there's a case to be made that he applied his own direction to Batman (giving birth to the Bat-god), but Flash, GL, MM, Superman, Aquaman, and WW were all used as is (even to the point of incorporating Electric Superman and Hippolyta).

Far from refusing to use other creators' characters without revamping them, he showed (I thought) a great deal of respect for what other current writers were doing with them.

Morrison shot Tempest because he was a vanilla character (ironically). He leaves plenty of characters alone, like Robotman.

I didn't love him getting shot, but it's not like I miss him, either.

For a second, I thought you were going to talk about the other-other Tempest. The Atari Force uniforms were kinda similar to the New Doom Patrol suits. Actually, I guess all three Tempests wore red and black.

This whole business with all black characters having the same, socially-relevant style background, begs one question: Why don't more people like Mr. Terrific? He doesn't have that background.

Because, although Michael Holt is very cool, he's dour, sour, and depressing.

The original Mr. Terrific ADORED the fact that he was fabulous and found something to do with it. Holt seems like been forced to do community service...

They need to fix that.

Shooting Josh was maybe the only way to have him make something interesting: dieing. Dor DP Tempest was just to "straight". Standard powers, good looks, no psychoses. In Morrisons run, he probably used his powers once.
Okay, he had the hots for Negative Woman, the ol' mummy. And she was Russian. So, yeah, the Chief probably did the right thing. All the other options were taken. And it defined the character so well.

Incidentally, the Museum page is by no means complete. If you're still looking for a black female supervillian, there's Peek-a-boo. There's probably several other Johns-era Flash villians that qualify but didn't make the list.

"BHM" is the heading, here.

I know what the "BM" part means, but what's with the "H" in the middle?

I basically agree with you on the use of other people's characters.

Shuffle 'em offstage if you want to, but you don't have to take them outta the Toybox permanently. If someone in the future might find something cool to do with Tempest...

(I mean, like, it's probably POSSIBLE, right? They DID pull off the whole Man walks on the Moon thing...)

Then why make it hard for them?

If Tempest hadn't died, Phil Jimenez would never have been able to rename and redesign Aqualad in honor of Neal Pozner. For that alone, the sacrifice was worth it.

Hmmm, unless I am mistaken Joshua Clay Tempest was still alive when Garth Tempest came about. Yes?

Probably, but he retired from super-heroics ansd was the team's doctor for years.

Garth took the Tempest name a good four years after Josh was shot by the Chief.

And I, also, did not like Josh's death, but I also enjoyed him much more in Morrison's Doom Patrol than before, so I'm willing to call it a wash.

I got 20-odd good issues out of a character I never thought I'd see ONE good issue out of.

I'm loving your Black History Month posts. They're almost as brilliant as your Vibe obsession.

[Though it goes without saying, Grant Morrison can do no wrong, even though I don't understand any part of Seven Soldiers yet...]

Are you planning on doing 28 BHM posts for the month of February? Are they all going to be DC-related? That would be &@!%@$% incredible, and would put you up there with Chuck D in my own pantheon of Gen X Black History teachers.

"Are you planning on doing 28 BHM posts for the month of February? Are they all going to be DC-related? That would be &@!%@$% incredible, and would put you up there with Chuck D in my own pantheon of Gen X Black History teachers."

" Garth took the Tempest name a good four years after Josh was shot by the Chief."

There were actually 3 DC tempests, in addition to Joshua Clay & Garth {side note: does he have a last name?}, there was also Chris "Tempest" Champion of Atari Force.

You do make it sound like Josh just had his head blown off at random in DP #19... remember he was the only one to help Cliff in the final battle against Mr Nobody! Even if he did wear a proper shirt. And some sensible slacks. At least he wasn't wearing his glasses for that one.

What's wrong with superheroes dressing properly anyway? Josh set a noble example to the other spandex-clad scruffs in his smart casual attire.

"They're almost as brilliant as your Vibe obsession."

I prefer to think of it as merely "proper and healthy reverence and respect for the INEFFABLE GLORY OF VIBE."

So you don't think the glory of Vibe is F'able.

I said it. I didn't mean it in a literal fashion. It's a metaphor. Stop staring at me.