Vibe is dead.
But he keeps appearing in ghost cameos.

Vibe is dead.
But he shows up, non-speaking, on a number of JLU episodes.

But he's the central character in the Justice League animated comic book issue #15.

Vibe is dead.
But he's one of the stars of an upcoming seven-issue story in both JLA Classified and JSA Classified.

When a Vibophile asked the recent 52 Panel at WonderCon whether Vibe would be in it, the answer was simply, "Vibe is dead." 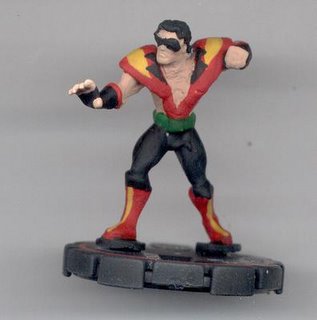 You know, I think Vibe's been in more comics since he died than when he was alive. Paco Ramone may be dead, but Vibe's becoming better known and more popular all the time. I don't think we've heard the last of Vibe.

Particularly since his brother, who has identical powers and whom he dissuaded from a life of crime, is NOT dead...

Not unlike Tupac and Elvis...

Could there be a Vibe: Resurrection mini-series right around the corner?

This does raise an interesting question I've thought about before. I'm fairly certain that Aquagirl (Tula) has appeared in more comics since she died than before.

I agree with you that Vibe has probably reached this status.

What other characters could join this club?

I think David Knight as Starman was one. In a way he was only created to die, but he did make one or 2 appearances in the Will payton STARMAN series so I say he counts.

What about Ferro Lad of the LSH, from way back in the day?

yeah, what was vibe's brother's name? he was in that stupid Conglomorate or whatever it was that Max Lord's girlfriend and Booster Gold set up, wasn't he?

The Conglomerate was aggregated by Max's ex-wife Claire Montgomery.

I loved The Congolomerate storyline.

The Conglomerate did indeed rock. I miss the characters created for that group: Vapor, Echo, Praxis, Reverb/Harline, Templar. I should count my lucky stars they haven't been killed on the whim of a writer needing some cannon fodder for his gigantic "event" story.

Very sad about Maxi-Man, though...

I liked the storyline as a whole. But as for the characters, I liked only Praxis and Reverb.

I think we need a post on this, for those of us who don't remember...