A Wing and a Prayer

Geoff Johns wants you to think this is Wing. 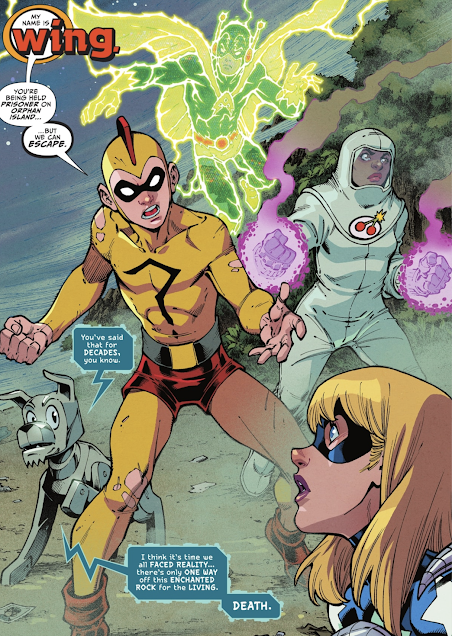 I'm here to tell you it isn't.

Oh, I don't mean that it's a fake-out or a shapeshifter or anything.

What I mean is that this is the revised version of Wing that Johns is shilling. Not the Real Original Wing.

This is real original Wing. 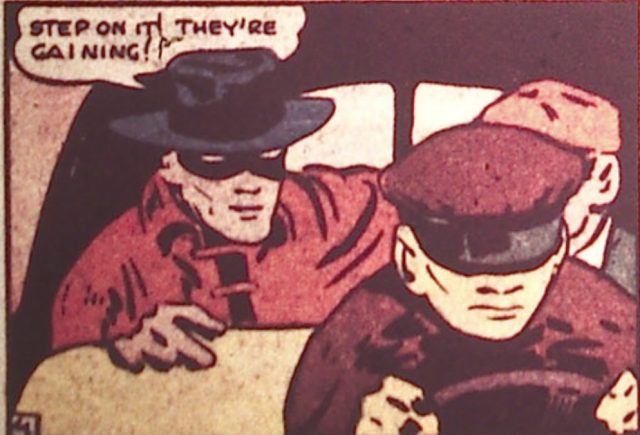 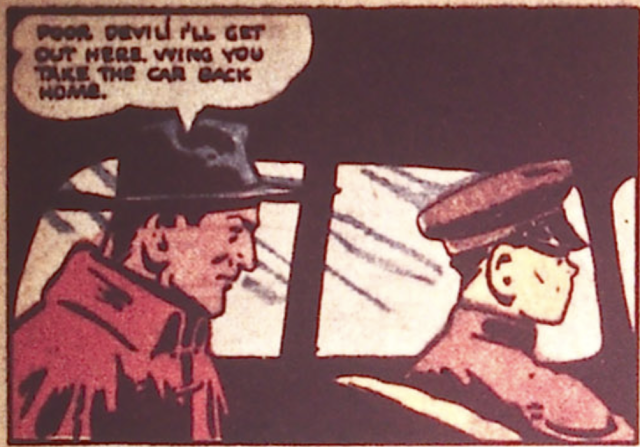 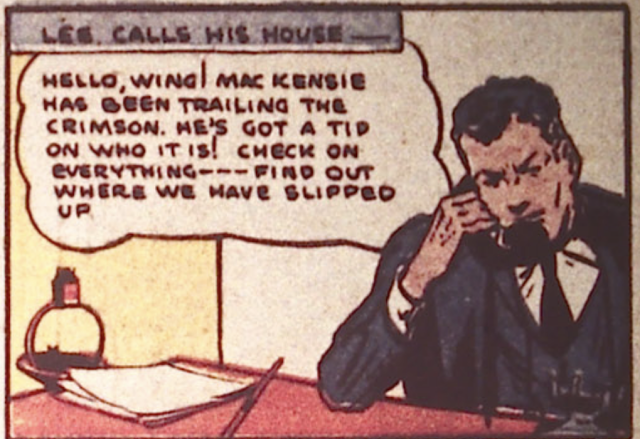 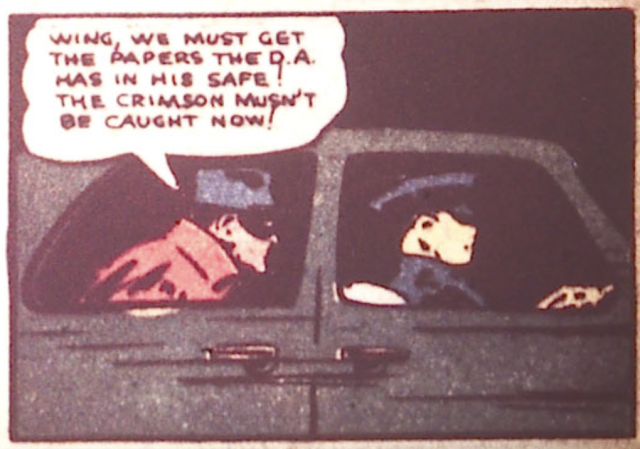 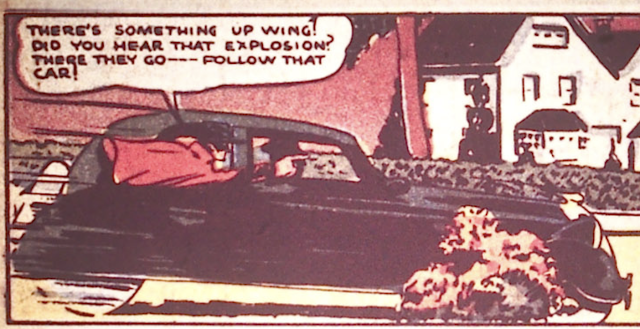 The real original Wing is 20-something (MAYBE he's 18).  He's a professional valet and chauffeur for a living, so he's not underage.  He's your basic bad-ass super-competent trustworthy Asian valet/chauffeur; he's "Kato".
The reason that Wing was Kato is that the Crimson Avenger was the Green Hornet. That's certainly nothing DC talks about, but nothing could be more obvious. The Green Hornet was created in 1936 and the Crimson Avenger, a nearly identical character, in 1938.  I mean: he was a wealthy newspaper publisher with a Asian valet/chaffeur, his color-named alter ego wore a suit, fedora, and domino mask, used a gas gun and huge honking limo, and was suspected of being a criminal by the authorities. Really, now. They might as well have named him "Rhett Breed".

Wing wasn't an action-star like Bruce Lee; he's really more of an "Alfred" than a "Robin".

But he was an invaluable partner, with useful talents and contacts.

This was how the Crimson Avenger and the Wing were originally portrayed in the Golden Age, one of the comics features where Chinese characters were consistently portrayed with dignity and respect.

Until. Detective Comics #44, Oct. 1940 (which you probably remember better as the "Speed Saunders versus the exploding bowling balls" issue).

We can blame Batman & Superman (et al.) for this absurdity. By 1940, it was clear that pulp-style slouch-hatted avengers were OUT and costumed crimefighters were IN.

The Crimson Avenger, now authored by people other than his creator, leapt on the bandwagon so as not to get left behind.

The Crimson Avenger did not make the transition gracefully.

The Crimson Avenger didn't do anything gracefully, in fact.

His letterer seemed to have a drinking problem.

The Crimson clearly wanted to be Starman.

His stories became lurid, even by Golden Age standards.

Almost as if to emphasize how badly the transition was being made, his costume sported a stylized bullet-hole symbol at exactly the same time that he switched from carrying actual pistols to gas-guns.

Yet, somehow, all this pales to how badly they messed up WING.

They re-made Wing over as a kid sidekick so that C.A. would fit in better with the Soldiers of Victory (yet ANOTHER strike against the SoV).  The costumed version of Wing debuted in World's Finest Comics #4 (Dec. 1941).

December 1941 was not a good time to be an Asian character in comics. Even if you were a Chinese good guy.

was now THIS guy:

This is the guy Geoff Johns is trying to bring back. Or, more accurately, to fix.

I sympathize with what he's trying to do. But doing so overwrites what we should be remembering, which is the real original Wing, rather than this painful embarrassment that GJ is trying to redeem.  Who knows, Johns being Johns, he may have the Real Original Wing in mind as Costumed Wing's older brother; I wouldn't put it past him.  No one know how to have his cake and eat it too like Geoff Johns.

But the other problem is: Real Original Wing debuted in 1938, but this Costumed Wing in 1941.  Real Original Wing pre-dates ROBIN, the Sensational Character Find of 1940, and the Costumed Wing does NOT.  I don't want Johns retrofitting Costumed Wing in a way that backdates him into being a costumed kid sidekick before Robin, The Boy Wonder, who actually IS the original costumed kid sidekick. Because that sort of thing can take on an inaccurate life of its own, and my fervent prayer is that it does NOT.

Anyway, just so YOU know, no matter what Johns does with it: Wing did not start out as a costumed kid sidekick.

It's not for the weak.

Anyway, my mother had many sayings about this.

"Tired dogs are good dogs.  And the only good Dachshund is a tired Dachshund." 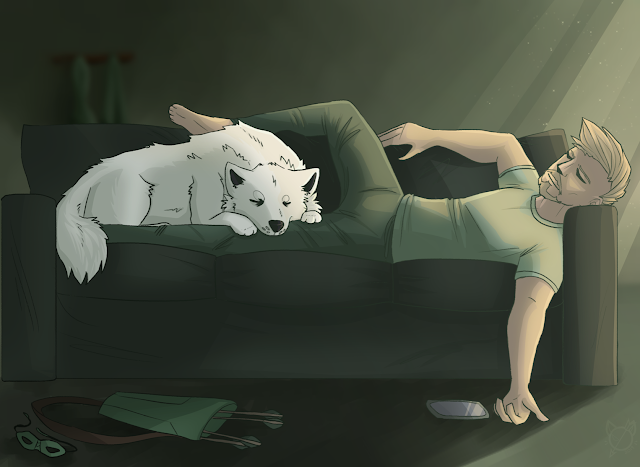 "Never worry that your dog doesn't love you. Worry that it doesn't respect you. Unless it's a Dachshund, then you know it doesn't." 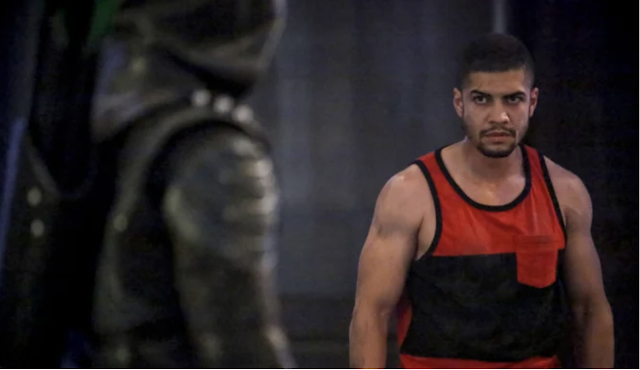 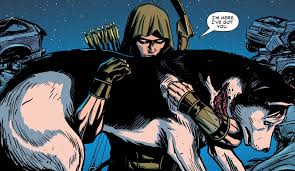 "There are two kinds of dogs in the world: those that look where you're pointing and those that just smell your finger." 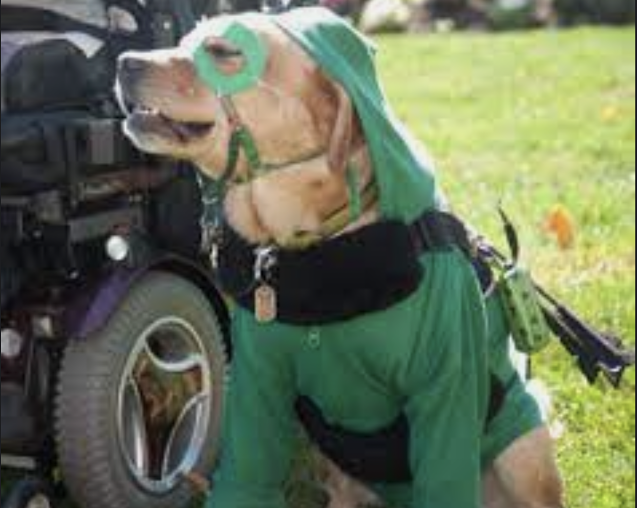 It's that last one that I have found most applicable to humans as well.  And I thought of it again today when I read this by Screen Rant (cousin site to Comic Book Rant):

Specifically? "he wants to be like the Dark Knight."

Well, I'm glad I was sitting down for that newsflash of insight. I read that comic book panel and got this.  Screenrant read it and got "hey, Green Arrow wants to be Batman."

Thank god they never watched "Brave and the Bold", I think their heads would have exploded.

I've often made fun of Green Arrow for not being a detective.  Well, compared to Screen Rant...

Ollie didn't really commit to the bit until 1960, when he appears to have had contractors install an ACTUAL cave.

Oh, those poor idiot writers of 1965!  Let's look back and smugly congratulate ourselves on correcting the errors... 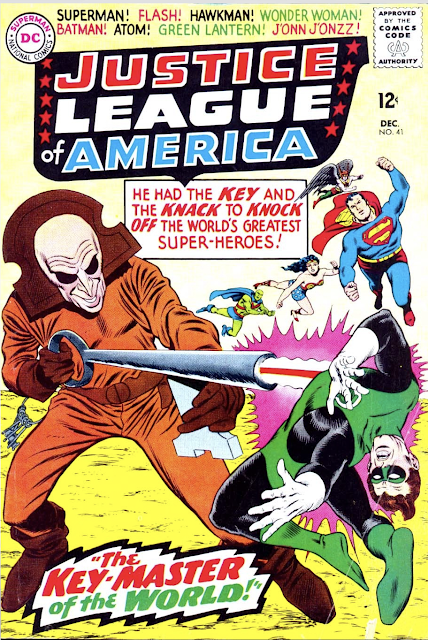 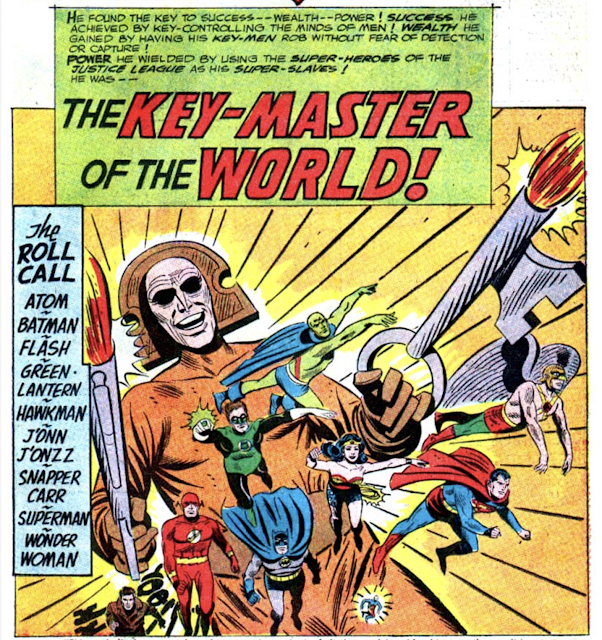 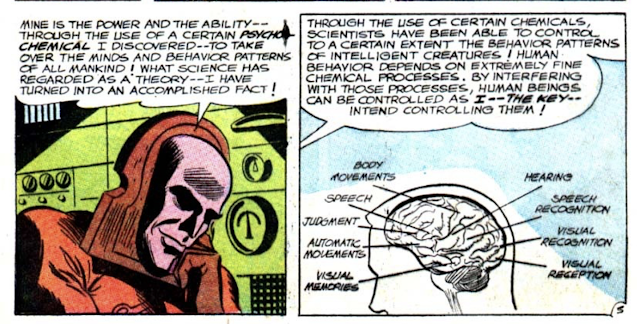 ...that they didn't make at all.
Which CBR (Comic Book Rant) doesn't know because...they didn't already know or bother to read the Key's original story.
Note to Comic Book Rant: the Internet is not a test. It is not school. You are not required to give answers to questions you don't know or to talk about things you don't understand.  So, please stop doing so.
P.S. If the Internet WERE a test, it would be VERY easy to cheat, because all the answers are there, if you aren't too lazy or sloppy to look them up first, Amer Sawan. If you'd done your research, you'd have learned that
the "unlocked the unused potential of his brain" was an addition to the Key's powers made by...
Grant Morrison in 1997 when he modernized the Key as a foe during his JLA run, over thirty years after the character was introduced.
Posted by Scipio at 6:40 PM 11 comments:

Email ThisBlogThis!Share to TwitterShare to FacebookShare to Pinterest
Labels: CBR

How I May Come to Love Green Arrow

THIS is all that matters this week:

It's from Geoff Johns' latest retconshriftfest, Courtney & the Golden Age Sidekicks That Never Existed #2. It's a perfect example of why I am happy to indulge any of GJ's flaws or stumbles as a writer or just choices I don't care for (one of which we'll be discussing later this week).  I can forget or ignore details of stories I didn't care for; and he makes large-scale sweeping changes so casually that please me so deeply that All Is Forgiven, like a sitcom husband at the end of a 30-minute episode. And this one?  Oh, I can forgive A LOT for the sake of canonizing:

THAT OLIVER QUEEN'S GOLDEN AGE HAPPENED TO "OUR" OLLIE QUEEN ON EARTH-0.

It was suggested before, but here it is, loud, bold and unretractable: at some point in his contemporary career, Ollie Queen (AND ROY HARPER) went back in time and were STRANDED in the 1940s for a good chunk of time, where they operated as THE GOLDEN AGE GREEN ARROW AND SPEEDY.  Ollie SHAVED his goatee to do this, as a disguise.

For one thing, this it just plain HILARIOUS.

It means IT ALL HAPPENED "for real" to "our Ollie", the one who used to run about raving about 'fat-cats'. All of it. Gayland. Bull's-Eye. The Black Raider. The car-catapult.  The Octopus. OSCAR AND ALEXANDER THE GREAT.

I'm gonna assume that in some Noodle Incident that I hope is never, ever explained ,Oscar and/or Alexander the Great is responsible for Ollie & Roy traveling to and getting stuck in the '40s. Or maybe it was Per Degaton's doing because--YES. Because Per Degaton needed Ollie to join the Soldiers of Victory so he could affect Alexander the Great's life, so that Per Degaton could defeat him at the Battle of Arbela. Yes; Roy Thomas would approve.

Now, we know already there is an Earth-2 where all this stuff ALSO happened. So this is completely gratuitous. GLORIOUSLY, DELICIOUSLY gratuitous.  Geoff Johns has gone OUT OF HIS WAY to do this. And, meanwhile, ONE PERSON is missing after the "Dark Crisis" hoo-haa: Ollie Queen, who will be sought for by His Family and found, of course.

Here is my hope. Golden Age Green Arrow (let's deem him "Oliver") was introduced in 1941

He was reinvented some thirty years later by Denny O'Neil in 1970 as a more "Robin Hood", anti-establishment type (whom we will label as "Ollie").

Well... that was over FIFTY years ago now. It ain't 1970 any more. Like a lot of the DCU, Green Arrow is twenty years overdue for a refresh.  And who is more likely to fix a broken character with a refreshed view of their origins than Geoff Johns?

There have been some very successful templates that could be followed.

But, as usual, Geoff Johns seems to be forging his own path. And here's what I hope it is, based on the revelation that "Ollie", AS SOON AS HE HAD THE CHANCE, chose to become "Oliver".

And it is PERFECTLY consistently with his personality.  NO WONDER he is so righteously angry all the time. He WANTS to be the Golden Age Batman. He WANTS to fight crime COLORFULLY. He WANTS it to be fun.

But too often the world sucks and doesn't cooperate.  And he resents that.  It's the fault of greedy people and vicious villains. They have failed him; they have failed this city, and that ticks him off. He doesn't WANT to be grim and gritty. And the people who force him to be WILL pay.

And THAT is consistent with that guy in Brave&TheBold. AND that guy on CW. "Ollie Who Became Oliver" then had to come back to be Ollie and is angry about it, but who still has flashes of unapologetic Golden Age zest and Robin Hood swashbuckler flair?

THAT is a Green Arrow who is interesting.

THAT is a Green Arrow I could come to love.

P.S.  Is it any wonder Speedy turned to drugs after returning from the fabulous '40s? Now, even THAT finally makes sense.

A Christmas Wedding for a Pagan Bride

My Sims versions of Diana Prince and Steve Trevor decided to (finally) get married over the holiday. 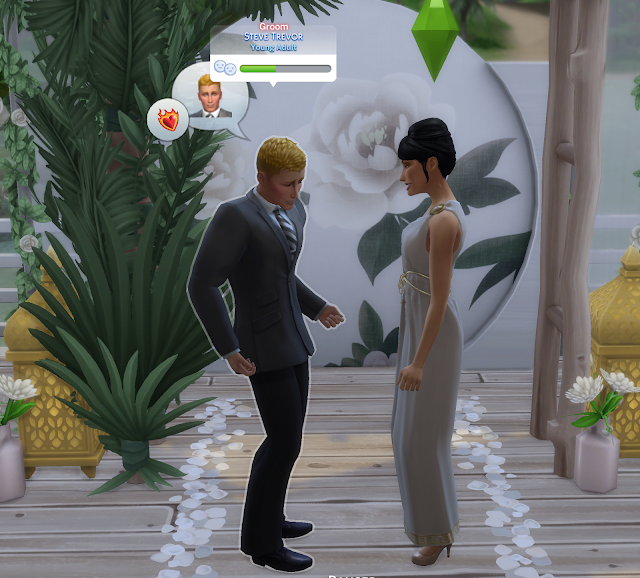 At least, in theory.

Most guests other than Ollie had the decency to stay in their seats and observe the ceremony.

Diana didn't entirely understand some of our wedding traditions, but she tried, bless her heart.

Likewise, Steve had some trouble with some Themysciran traditions.

Etta Candy seemed to have misinterpreted "festive attire" on the invitation.

Steve found out at the reception what happens when you ask Mr. Terrific "What's your degree in?" 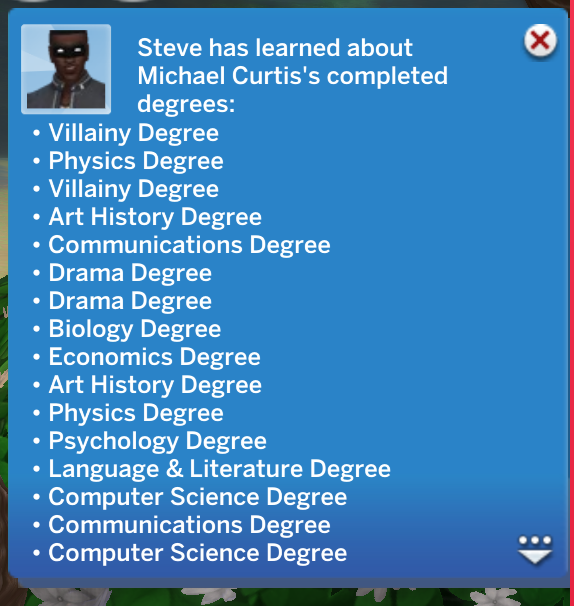 Diana had some wistful memories that would have been better left at her bachelorette party.

As you would expect, the League Boys hung out together.
Because most of the guest's were Diana's, Dinah got stuck at The Groom's Table, which did not entirely thrill her.
Arthur didn't sit with the JL Boys, because as the Officiant he was busy trying to keep Wild Dog and Black Canary from breaking out into their Next Violent Argument.
Eventually, Arthur extracted Renê for sake of his safety, since the last person you want yelling at a wedding or anywhere else is Black Canary.

Diana's commitment to truthfulness was put to an awful test.
Bruce received some interesting news while he was there.
But the third-happiest person after the Bride and Groom was J'onn, who got to take home all the leftover Super Chocolate Tummers Bomb Cupcakes.
Photo courtesy of Barry Allen.
Posted by Scipio at 2:06 PM 5 comments: