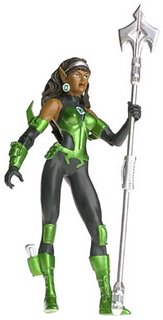 Fatality? She has issues, most of them with the Green Lantern Corps, many of whom she's had stuck on the business end of her Fleur-de-lis of Doom. Yet she wears GL earrings; I guess the need to accessorize trumps all other emotions.

She's from another planet (Xanshi, was it? The names of alien planets should always have an X, Y, or Z in them, don't you think?), but she looks like a black person, so we're going to count her.

She's your basic Alien Warrior Princess. Isn't it funny how many "warrior cultures" bent on mutual destruction survive untamed long enough to develop transstellar technology, when on Earth they pretty much fade out as soon as rudimentary manufacture takes hold? The gods must really like Alien Warrior Cultures.

Her real is name is Yrra Cynril; lots of Ys, very alien. She has a love-hate relationship with John Stewart (the GL who failed to save her planet); mostly hate. Doesn't that make her the only black supervillain in the DCU who's the archenemy of a DC black superhero? Isn't that odd?

According to her Wikipedia entry, she viewed Kyle Rayner as her ultimate prize. Huh, who doesn't, girlfriend? She met him out dancing at a NYC discoteque (called "Disco Tech" because that's how comic book writers are). No, really. I guess that's the first place everyone looks for Kyle. Don't you just hate it when the hot chick you're dancing with turns out to be an Alien Warrior Princess hellbent on your destruction? Always puts a damper on the evening.

Fatality's got artificial arms because her real ones got blown up in her fanatical pursuit of pointless vengeance. Why doesn't she just put zappy powers into the arms instead of carrying around the big pigsticker? Because Alien Warrior Cultures with high-tech energy blasters still like to carry knifes and spears, I guess; who can say?

In the final analysis, it's good she's actually an alien, because she's a terrible role model for young black women.
Posted by Scipio at 3:29 PM

To those concerned about Tooth's well being I have posted Chapter 6 on fanfiction.net under dc super heroes.

She's something of a Black Knight. Not only did one arm get blown up good, the other arm was bitten off by a giant alien worm thing, and she recently lost an ear to Scandal! At the rate of a body part per encounter, she should be just a nose by the time the next Crisis rolls around.

Maybe she and Pantha should join forces?

Are those "cargo boots" she's wearing?

That accessory pocket is genius.

You made this up, all of it. There is no character called Fatality.

(I'm praying that I am right, for otherwise, we are all doomed. For such a character must surely be one sign of the End Times. And The Rapture is upon us.)

Actually, in a crowded universe like DC's all you have to do is wait for a wimpy interstellar race (Rannians) to visit your planet. Then you take them and their ship and figure out how to make/steal more.

That's why you need a prime directive! Hah!

What the heck is that thing sticking off of her right boot? It looks like a tip jar, with some five-spots sticking out of it. Or maybe it's a wet-nap dispenser.