I must tell you ... Clue Number Five! 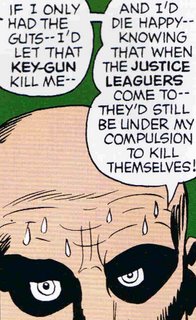 I didn't want to share with you the Top Ten Clues You're In A Silver Age Justice League Story.

I wanted to keep them a secret, but I-- I had to tell you. I couldn't stop myself, for some reason. Apparently, I'm suffering from...

Yes, it's true: half the time, the Silver Age Justice Leaguers had no idea what they were doing or why because they were suffering from "strange compulsions". As opposed to their regular compulsions? It's not something I want to think about.

Where are we going? What are we doing? Why is this happening?
Sometimes it's almost as if they were talking to the writers. 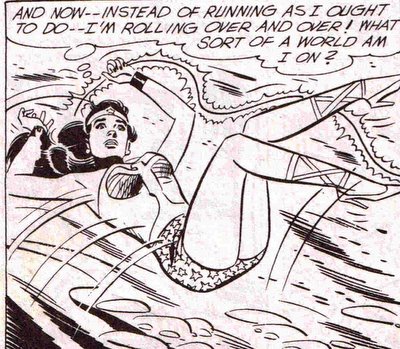 "Instead of running as I ought to do -- I'm rolling over and over!
What sort of world am I on?"
I dunno, Diana; Fanfemina 5, the World of Lesbian FanFic?
The Leaguers aren't stupid, though; they used to work it.
Clever JLAers, always turning potential disadvantages to their favor! So inspiring. My heroes. 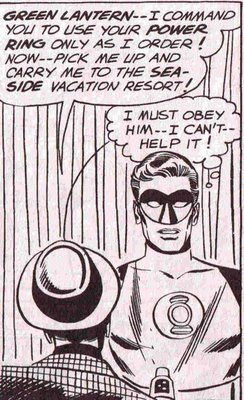 What's that, Hal? That "queer light" is compelling you to pick up men and carry them to seaside vacation resorts? Of course, it is, dear; nice role-playing. Whatever helps you sleep at night (or the day after).

Wait, there's an entire world of lesbian fanfiction and I wasn't informed of its existence?

If I had hooded minions, one of them would die for such incompetence.

That "queer light" is compelling you to pick up men and carry them to seaside vacation resorts?

That, sir, earned applause here in my computer sanctum.

Wasn't this when the Leaguers were being controlled by some 70's hippy?