A Peppy Development on Riverdale

the newest development on the show Riverdale (which, yes, is still a thing) is one which has utterly confounded everyone as being incomprehensibly beyond the pale, even for a show that has exemplified "madness" as method.

To me, on the other hand,

it's the first thing on the show that has made any sense in YEARS.

Not that I've been watching, of course; I value my sanity too much.

But reading about this latest episode, which deals with the after-effects of a bomb exploding at Archie's house, sent me dashing to television to watch. In short, Archie and Betty should probably be dead but instead...

Betty has some sort-of "Spider-sense" ability (very useful when you are an FBI agent) and Archie has mysteriously picked up a lot of extra mass, becoming extra dense (no jokes) and his skin becoming nearly impervious (which is why he and Betty, whom he was in front of, survived the blast).

Let me think REALLY hard about that. 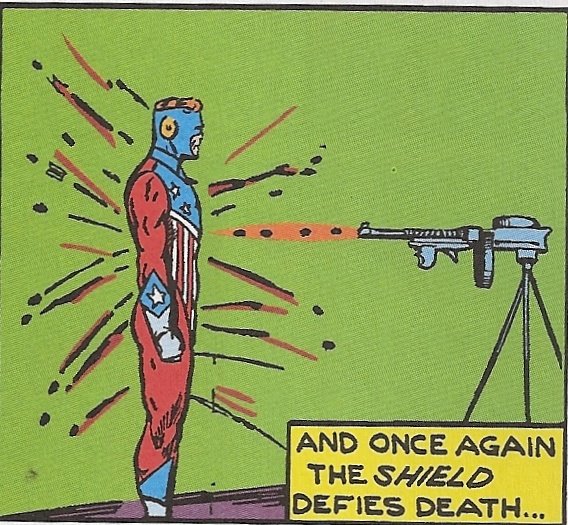 It took him some 80 years. But the ever-insidious Archie finally has replaced the Shield fully.

By BECOMING The Shield. 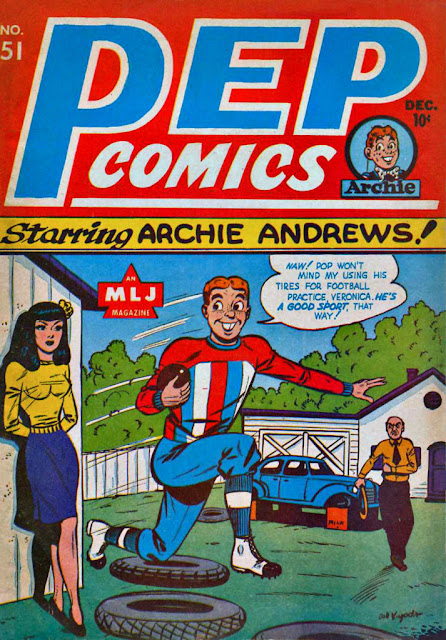 I certainly enjoyed it and I wholeheartedly approve of it; I don't hesitate to recommend that you see it.

Pack a lunch when you do; modern audiences are unaccustomed to actually getting their money's worth in film length, and this one gives you 2:55 hr.  Could it have been tightened some? Of course; there's definitely some loving camera-porn going on (long, joint motorcycle rides through the cemetery, anyone?).  But I didn't feel the movie dragged and I was invested and interested through the end.

There is definitely a point where the movie feels OVER.  (Unlike Valentine, which feels endless.) The villain is out of murder targets and has been caught, the underlying mystery that ties them together has been solved, the B Plot for the Second Lead has been resolved. Obviously, it's over. I enjoyed the delightful tension of knowing full well that, no matter how many signals were being sent that it was over, that it WASN'T, because this is the Riddler, and there is always more to the riddles than merely their answers.  Sure enough.  I had noticed Chekov's Gun in the first act, but so much had gone on to distract me from it that I only JUST remembered it before... it went off in the third.

And that third act is key. The movie is... grim. There is not a single moment of levity in it (a feature it SHARES with Valentine) even though there are plenty of opportunities to acknowledge that, yes, it IS a little ridiculous to have Robert Pattinson in a batsuit show up at a dance club. "No, thanks, I'll sit at the bar; I shouldn't wish to attract attention."

And you know what? I didn't miss it at all. You want funny Batman?  I would link to the current trailer for the animated Super-Pets movie with Bat-Hound interacting with Batman but, of course, it's not actually funny. Point is, sure, Batman can be funny; it's easy to make the case that NO hero has greater funny-potential than Batman. But Batman doesn't NEED to be funny.

Batman's not a Marvel character.  DC movies shouldn't be required to chuckle at the character's intrinsic goofiness out of self-defense, like a nerd going "HEY, if make fun of MYSELF enough then the BULLIES won't have any ammunition and people will think I'm COOL!" You can watch Marvel movies for that. The Batman is unapologetically grim.  It's a film noir / detective / political thriller / serial killer / mystery / police procedural / action film.  No, it's not funny; go watch Dog Police.

Unlike Valentine. Don't watch that.

It's the third act that redeems that darkness and I think a lot of people are missing that. It redeems Catwoman and The Batman, and creates the potential for redeeming the Wayne legacy and Gotham City.  The way has been cleared for a new Gotham which will definitely be better in many ways.  And worse in others.  There will be less systemic crime but there will be more Riddlers.  The Gotham of Thomas Wayne becomes the Gotham of Bruce Wayne.  One where the contrast between good and evil is more stark.  With all its talk of surviving our scars and an almost painful clarity, it seems to set the stage for the entrance of a truly meaningful Harvey Dent, which is why the final scene in Arkham was... not what I was looking for.

The plot is a political mystery; for the first time ever, I felt as though I were watching an issue of Detective Comics on screen and that felt great.  Particular since I was pretty much able to keep up with the Riddler's clues and the underlying mystery, thanks I'm sure to my in-depth studies of the techniques of Ace Investigator Speed Saunders, the REAL detective in Detective Comics whom that guy in the black cape supplanted.  The plot also features a Gotham that is corrupt but not grotesque, a unique origin and motivation for the Riddler, an unusual backstory for the Waynes, a pre-established partnership between Gordon and Batman that is one of the film's most satisfying aspects, and a Bruce Wayne who has truly opted out of his role in society.

Pattinson is really good in his role; you may not LIKE his role, but there's little arguing how well he plays it.  Never have I seen a Batman who really scared me before; never have I see a Bruce Wayne who  seemed more vulnerable.  Batman was an imposing monster; Bruce Wayne looked like he barely held up his own clothes.  In that film, no one in their right mind would imagine that Bruce Wayne could be Batman.  He also undergoes the best character arc any film Batman has ever gone.

I didn't like Dano that much as an actor, but I respect what he and the film were doing with the Riddler. It was certainly a fresh take (as you'll see), but it hit many of the required notes.  The Riddler is brilliant.  The Riddler's clues are sometimes about the questions as much as the answers.  The Riddler isn't physically threatening, but he can still kill you.  The Riddler still has a corny sense of humor. You don't really defeat the Riddler by being smarter than he is, because no one is; you defeat him by being a better person than he is.  And the Riddler is just... really, weird, man.  Weird guy.

Batman and the Riddler are a great counterpoint.  Bruce Wayne and Batman both are always hiding in the shadows are yet are ALWAYS recognized, even though they never introduce themselves. In fact, I would have to watch the movie again to be sure: I'm not certain "the Batman" is even SAID in the film, as impossible as that sounds.  The Riddler, on the other hand, is always (as is traditional) trying to draw attention to himself and yet... remains an unrecognized unknown.

Zoe Kravitz played Catwoman. She was fine. Andy Serkis played Alfred. He was not.  As I said of Michael Caine, Alfred should not sound like Halfred P. Dooli''le. Those people are gardeners, if they're lucky. Some of Halfred's plot-moments are a bit heavy-handed, like the cufflink scene.  But like myths, comics books are generally not designed to be subtle they are just designed to be impactful.  If you go into a boxing ring, expect to hit over the head a couple times, you know?

What else is in the film?

Schubert. Way too much Schubert. In fact, when Bernard, I mean, Gordon asks, "What's that?" I half-expected Batman to go "It's Schubert's Ave Maria, man, have you been unconscious for half the film?!" Also in FX, Batman's clompy boots and monster walk, which was really hot actually.  And scary monster movie soundtrack.

Gil Perez-Abraham's mustache! Holy crow, how did that thing not get billing on the poster?  It did more to make real the world of the GCPD than the entire Gotham tv series. It had BETTER be in the sequel, and I expect Officer Martinez to get up the courage to ask out Bruce Wayne.

Colin Farrell.  Somewhere.  Under all that.  I get it, it's the Penguin from that Batman game and I understand multiple mythic interpretations but... how far away from the traditional version of a character do you have to get before it becomes just Not That Character?

Gadgets! Bat-contacts were ULTRA-cool; those are instant classics, not one-offs.  Chest-batarang makes so much sense I almost laughed when I saw it. And the Batmobile; the Batmobile SCARED ME A LOT.  Which made me happy.

Pete Savage. I actually had to cover my mouth to keep from laughing out loud since I knew no one else in the theater would get the joke. If only they'd given him a French accent.

Lots of cutesy customized greetings cards that are clues to murder.  Hm. Seems like I saw that in some other movie, but just can't remember where...