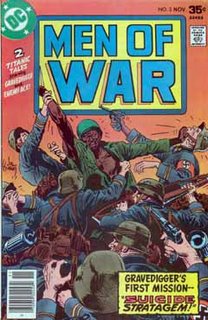 Because certain people demanded it...! Today's BHM is a polio victim who's a ditchdigger and fought Nazis. Yes, really.
The 1970s weren't really a high point for DC's superhero comics, but the decade did see a blossoming of other genres: such as Westerns, romance, horror, and war.

Everyone's heard of Sgt. Rock, but fewer remember the 26 issues of Men of War, whose star was Ulysses Hazard (now, THAT is a comic book name!), codenamed "Gravedigger".

Though stricken by polio as a child, U fought it to become a determined and able-bodied adult. Having joined the Army to fight the Nazis, predjudice confined him to menial tasks like gravedigging, until he slipped 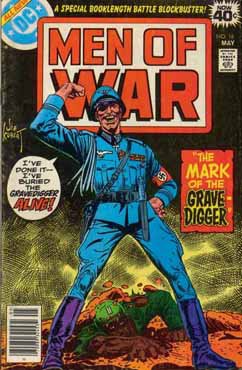 past presidential security to take up the matter with FDR himself. FDR, understandably impressed, made him a Captain, gave him "Gravedigger" as a codename, and sent him out as a one-man special ops force. Ulysses Hazard was the bomb, folks.

Do you remember the Vertigo series Angeltown? That was supposed to star Ulysses Hazard, but he was creator-owned and so couldn't be used. Creator's right are nice for creators, but they consign a lot of their creations to become mere historical footnotes rather than living legends.

Oh, and Gravedigger was created by David Michelinie. Recognize the name? Same guy who wrote the story that revealed how Black Manta got his name.
Posted by Scipio at 7:55 PM

I loved Gravedigger back in the day! But here's another character nomination for you: Tobias Whale! He's mentioned in this week's issue of GL and is African American - even though he doesn't necessarily look it.

P.S. Thanks for visiting my humble blog!

DC has Whale, and Marvel has Tombstone.

How the heck was Gravedigger creator-owned? Nobody owned their own characters in the mid-70's.

Are we going to see Black Vulcan here in BHM?

Yeah, Michael, I was suprised by that, too. But didn't something similar happen with Black Lightning, who was from the same era?

No, Tony Isabella doesn't own Black Lightning, he just kind of kept a proprietary interest in the character for awhile. But DC definitely controls BL--I seem to remember reading an Isabella column a few years back where Tony was bemoaning how badly BL was being written at the time. (I think it was about him being in Luthor's cabinet or something, but my memory's hazy.)

The Gravedigger issues of MEN OF WAR feature one of my all-time favorite war comic covers. There's this nazi soldier standing triumphantly shouting about how he's finally killed Gravedigger, who is rising from his own frigg'n grave behind him, and you just know that guy's going to catch the beatdown of a lifetime in about three seconds.

Gravedigger was cool but the black member of the Haunted Tank was even better. I can't remember his name at the moment (I'm at work) but I remember he boxed in the Olympics before the war. In one issue he met the German soldier he boxed against and had to beat him down again.

Now I'm going to spend the rest of the day wondering what the heck his name was.

Even better, if they gave Gravedigger his own movie, he'd already have a ready-made Kanye West theme song.

I can't figure out who the black member of the Haunted Tank's crew was. All I can find are their names: Jeb Stuart, Rick Rawlins, Arch Asher, and Slim Stryker.

I will be portraying him in the upcoming movie.

The black member replaced the one of the four you listed that was killed. Arch I think but it might have been Slim. Happened before the book went to $1.00 size with #201.

Here is a link to the GCD gallery.

This is driving me crazy now about his name. I used to know worthless trivia like this all the time. Must be this damn job taking up space in my brain from important facts, like the name of the black guy in the Haunted Tank....

Found it. Had to stop and look before I went crazy.

They guy's name was Gus Gray and he replaced Arch. If I remember right the tank first met him when they helped bust him out of a POW camp with some other soldiers.

He won't be in the Showcase Presents Haunted Tank volume. I don't think it goes that far.

Buy the volume anyway. Some great work by Heath and Glanzman. For my money they were both better in the War genre than Kubert.

So how many times did the Gravedigger get buried alive? Given comic-book irony and all, that has to be a pretty major occupational hazzard for the guy...

"They guy's name was Gus Gray"

Oh, yes! And you KNOW some writer worked that, given how corny war comics always are:

"They say war makes ya see things in black and white. Ya ask me, dividin' the world inta black and white's caused more problems than it solves. But that's just Gus Gray's opinion..."

Hold up, you're thinking of Easy Company's Jackie Johnson, former Heavyweight Champion who had to face the Nazi boxing champion in a deathmatch where he kept shouting: "SHOW ME THE COLOR OF YOUR BLOOD! IT IS BLACK LIKE YOUR SKIN!" in a maniacal Nazi rage.

Well, not like there's a such thing as a calm and gregarious Nazi rage, but you know what I mean.

He ends up giving the guy a transfusion to save his life after he's abandoned by his Nazi C.O., and it's--this'll sound familiar--one of my favorite War Comics.

WOW! What a flashback! I actually used to own the very first appearance of Gravedigger, though I think it went the way of all flesh when my mom finally decided to clean out her garage. I clearly remember him fighting his way into the Pentagon (which wasn't actually complete in 1942, nor was it anything but a hospital during the war, but hey!) for some unknown reason and then being offered a job by the Secretary of "Defense" (a job not created until 1947), who later muses that "an election is coming up" and "the right publicity" would ensure "a sizeable portion of the Negro vote" (since, you know, so many blacks COULD vote in 1942). But the best line I recall is when the head of the MP's wants to arrest Gravedigger and the Secretary asks him, "Did this man actually kill anyone?"
"Well, no. I mean, there's some awful bruises and some of the guys might walk funny for awhile..."
Heh.

You are right, that was Jackie Johnson I was thinking of. Gus was still cool as I remember him.