I'm on to you; I've sussed you out.  Through the power of literary detection and multi-dimensional logic, I know that YOU have secretly taken over DC:

What other explanation can there be?  Who else could
(a) come up with such ridiculous ideas to 'improve' and 'help' DC's classic heroes,
(b) have the power to make it happen at the snap of his fingers; and
(c) be shocked when it doesn't work out?

One of the latest targets of Bat-Mite's unique brand of 'help' is Green Arrow.

In case you haven't been following on the television, Ollie Queen's bow-wielding vigilante has been experiencing an all-time height in popularity, serving as the epicenter of a renaissance of comic book superhero shows.  There's been some solid criticism of the show's third season being too dark, and the producers, taking it to heart and encouraged by the lighter tone of successful sister series "The Flash", have vowed to let the show lighten up a bit in its fourth season (including Ollie rebranding himself from "Arrow" to "Green Arrow").

So at the same time, DC, under the direction of Bat-Mite, naturally decides to make Green Arrow The Comic Book....

Now, I have only read one thing by Ben Percy; his Batman comic with the plane of dead bodies. I liked that story a lot, so I have zero issue with Percy himself or his writing.

Also, I'm a big horror fan (film, not novels, but I'm not a novel reader).

All that said: going macabre/horror with Green Arrow is a pretty wacky idea, Bat-Mite.  It almost sounds like a prank, even though Percy sells it well in a recent interview.

I suppose "Green Arrow is the new Batwoman", that is, a Batman-copy who traffics in horror / macabre/ supernatural stories.  One the one hand, Batwoman has shown that that can work (until Bat-Mite decides you can't get married and yer comic goes down the tubes).  On the other hand...Green Arrow?  Hitting Hannibal Lecter / Jason Voorhees / Chthulu in the face with a boxing glove arrow?  That is so laughable I just might go for it (just like Bunnyman and Semisuper Clark).
But, as a general rule, when an established character suddenly gets completely transplanted into a different genre (such as the Atom or Aquaman becoming sword'n'sorcery, or Martian Manhunter and Dick Grayson and Aquaman becoming spy titles), it's a sign of desperation, an admission that you've given up on the character.  During the District of Columbia's mass gentrification of the last decade of two, we became familiar with the term "facade-omy": gutting out and replacing a building's innards completely but keeping just the very outside for appearances' sake as a sop to history.  That's exactly what's happening to characters in these circumstances. Instead of being regentrified, they are being regenrefied.

I'll say this for Percy: he's not afraid of WORDS

Novelists seldom are; I think maybe people who write comic books SHOULD be a bit more afraid to use words.  And Percy plans to use ALL the words apparently. On every page. Not sure that's a good fit with Green Arrow.  But who am I to argue with 5th-dimensional imps?

One thing, however, will sell me:

If this cover means we're going to get a grim'n'gritty redux of THE OCTOPUS, I will TOTALLY be there for that.
Posted by Scipio at 2:47 PM 15 comments:

Echo and the Bunnyman

"...while wearing a domino mask and purple and green jumpsuit while flying on some mysteriouslly propelled levitation device."

The Supervillain Handbook: the Ultimate How-To Guide to Destruction and Mayhem, by Matt D. Wilson, 2012, pg. 2. 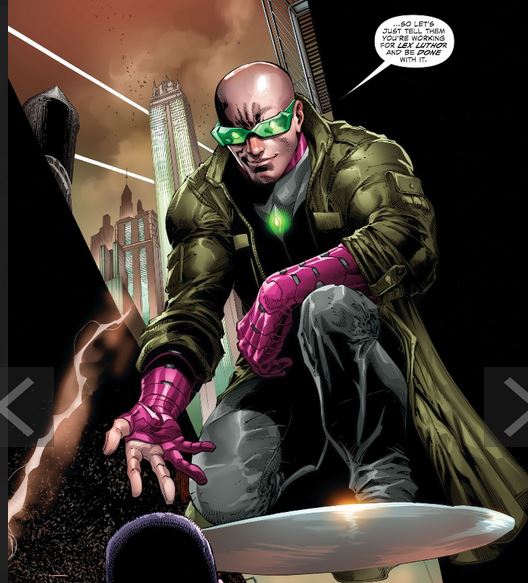 Well, it's not exactly a domino mask. But after all, isn't Lex exactly the kind of ass who wears Google-glasses?

Although I am (as previously mentioned) strongly disconcerted by apparent shifts in the Aquaman storyline in the "DCYou" (*sigh*), and amused by the absurdity of Commissioner Bunnyman in the Batman titles, I am surprisingly sanguine about the Latest Big New Changes to Superman, which include Lois's exposure of his secret identity and him having a mere echo of his former power levels.

First off: at least they didn't require a Sand Creature.  Because I still have a headache from that bit of nonsense.

Second, the Periodic Depowering of Superman is just something I have come to expect.  As I have written about before, long-running iconic superheroes tend to develop "persona-cycles": extremes along various dimension of their characters between which they oscillate.  Each character becomes a big 'mixing board' and the writer is the sound engineer tweaking what version of the hero we get.  Is "Superman as Kryptonian alien" turned up loud, or is "Clark Kent the farmboy" dialed up?  Are Superman's power levels amped up to an earth-shoving 11 or is straining to leap over tall buildings?  Long-running characters NEED these kind of options in order to stay fresh and maintain the constant illusion of change. 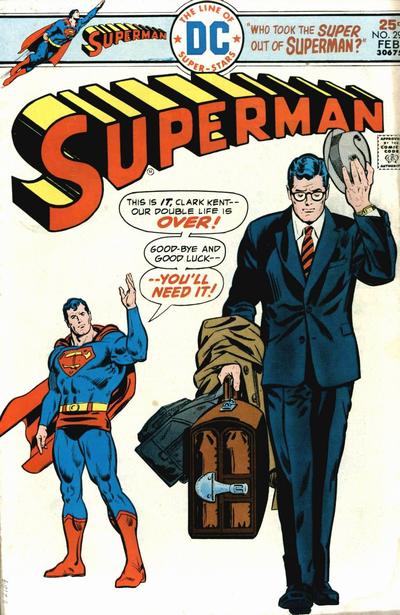 I have seen "Clark Kent no more" and "Superman no more" and everything in between.  This latest-- 'Superman is Clark Kent...Revealed!'-- is frankly, a welcome change.

It lets us suspend our suspension of disbelief that Ace Reporter Lois Lane (or anyone else) can't figure out that Superman is Clark Kent and has do what a reporter actually would; report it.

It lets the writers off the hook about what to do with Clark Kent. Because it's been pretty clear that (except for Geoff Johns) none of them has the slightest idea what to do with him.  They killed his parents off, so he has no family to talk to (including Supergirl and Krypto who keep getting sent off on a space-bus).  He's got no (human) love interest and his relationship with Wonder Woman is clearly the last priority in and least interesting part of her/his life (since it seldom turns up in either of their solo titles).  He's got no interest in his OWN stupid blog that Cat Grant bullied him into (if that even exists after Perry White hired him back, oh wait he fired him again).  The only remotely functioning relationship he seems to have is with... Jimmy Olsen. How sad is that?

It lets them off the hook a bit with Superman, too, because he's hard to write when he's super-superpowerful.  As someone wise once pointed out, "Seeing Superman pushing a planet out of the way isn't impressive, it's ludicrous.  Seeing Superman lift a TANK is impressive, because it's on a scale we can understand directly."  And now we have a Superman whose super-effort we can feel again, because we see HIM feeling them.

Besides, "Superman starts to lose his powers but won't stop fighting crime and needs to team up with Commission Gordon in a Batman-robot suit" is the most Silver Age thing I've seen since Kryptococcus the Omni-Germ.  I'm nearly willing to go along for the ride; I just wish it were a simple story, not another fake 'new status quo' that will have been superseded at least three times before "Batman vs. Superman" comes out.