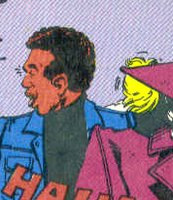 Our worlds are defined not just by their star players, but by their supporting characters, too, so we should all recognize Tooth during Black History Month. As far as I know, Tooth is not only the DCU's first black Denominated Henchman, he's the first one who is a recurring character. AND he works for the Joker. You rock, Tooth.

When the Joker became the star of his own series in 1975-76, he needed a supporting cast, which included his hapless former guards at Arkham (Benny Khiss and Marvin Fargo), and his three henchman, Blue-Eyes the Dumb Italian Guy, Southpaw the Smart Blond Guy, and Tooth the Generic Black Guy. Southpaw's in the back of that picture; Blue-Eyes is off-camera, getting run over by a truck because he asked the Joker a stupid question. When you work for the Joker, you don't have to wait for your annual review to get feedback on your job performance.

We don't know a lot about Tooth, like his last name, his background, or whether he ever wears anything other than that same blue leisure suit and black turtleneck. If you ask me, he's got to be pretty darned impressive to have survived working with the Joker for at least 10 years. Tooth needs some fanfic. If he were a Star Wars character, he'd already have 8 novels, 5 action toys, 2 fan clubs, and a video game voiceover by Khary Payton.

Dan Didio! Bring back Tooth; although he's a crook, he is an unsung hero of black comic book characters!
Posted by Scipio at 2:00 PM

I was hoping you'd get to Daredevil's Turk in this series, but this is even better. I thought no one else remembered Tooth!

I have GOT to write a Tooth FanFic right now! He is the BEST character ever invented. I just know and I don't even have any of the Joker series. As soon as I buy all nine issues and read them I'll make a FanFic called "Tooth, Swaord of the Joker" or "Tooth, the Man Who Killed Hal Jordan".

In true fanfic, Tooth would become a device linking all other black characters. Toothfic would all be about finding out that he once dated Vixen, skipped a Jefferson Pierce class, mugged Amanda Waller's husband, or sold weed to Shilo Norman's dad...

Sorry to be off-topic, but I though Scipio would want to know that there's a JLA Detroit story lined up for JLA Classified soon! Look here for the Newsarama interview with Mike Carlin for a couple of details. Scroll down to the cover image of the Martian Manhunter and everyone's favorite Detroit Leaguers.

Okay. I'll fix that. How about this: A black drug dealer kills the Joker and spares Tooth if Tooth agrees to work for him. Tooth agrees and has to decide weather or not to obey his orders or lead a doomed revolt of black minority workers against the drug dealer including his girlfriend Sarah Stone (Cyborg's old black girlfriend) or to whipe them out as the drug lord obeyed. He goes with the drug lord and ends up a super villain shipped to Belle Reve to do missions with the Suicide Squad. That's sure to win awards.

J'onn; Ye Editors say for that story to work you have to work Black Spiders into the drug dealer angle, Nubia into the minority workers angle, and Bronze Tiger into the Suicide Squad angle.

And keep the Joker alive. Other than that, they love it!

Speaking of Turk, I remember reading an old Daredevil letters column where an outraged reader accused Frank Miller of racism because Daredevil was always beating up black people. To be honest, between Miller's primitive drawing style and the acid trip-like colors on that book, I'm surprised anyone could tell the race of any character during that run.

Sorry. Wasn't thinking. Sarah CHARLES! Keep an eye on fanfiction.net under DC Super Heroes for the first chapter in a few days. Guess who has too much time on their hands!

Everything Dale Gunn knows he learned from Tooth.

I have learned more ideas in the night. During the minority worker scene Lois Lane in her black form could interview him for a story. In the Suicide Squad angle he could almost die because John Stewart who is furious from the death of Katma Tui attacks him, and then meet the Black Racer.

Here is chapter one. I can't post it on Fanfiction.netyet because they won't let me post for 2 more days.

“So boss, what are we going to do, next?” asks our star, Tooth.
“Dear Tooth, I’d think you wouldn’t ask such questions. Remember what happened to Blue Eyes?”
The Joker grins as Tooth flashes back to the brutal scene with the car.
“Since I’m in such a good mood, you can live. I’m taking some time off. While I’m gone you’ll be working for some drug lords, the worst kinds. They’ll be black ones.”

The next day Tooth is in the office of the drug lord, Morgan.
“Are you jiving me, Jack?” Tooth yells at him.
“No, I’m not ‘jiving’ and my name isn’t Jack” yells Morgan “You must take down the Black Spider. He’s a major threat.”
As Morgan finishes his speech the Black Spider flies through the window and knocks Tooth out of another penthouse window.
“Whoever sells drugs, dies at the Hand of the Black Spider.

“Are you jiving me, Jack?” Tooth yells at him.

Most of my black talk comes from Captain America and the Falcon in the 70's. Look forward to "Getting it on with that foxy mama" and phrases like oncle Tom and honkey.

For Lack of a Tooth

When last we left Tooth he was falling out of a window.
“How dare that jivin’ honkey knock me out of a window?” Tooth complains in his head as he falls.

Meanwhile down below…
Nubia is thinking about how she was released from the underworld and almost sold to Marvel.
“How dare they sell my character to another company? Wait who’s that up there it’s the one and only TOOTH!”
Nubia tosses her lasso of truth to catch Tooth.
“Tooth, you must join the REBELION. Sarah Charles and I are leading black minority workers against the forces of jive and honkiness and drug lords and all that jive. DIG?” Nubia says. “You must obey me for I have saved your life.”

It looks a lot cooler in word with the giant Tooth logo in the Middle of the page.

Forsooth thou art a Tooth

“Sarah! What’s my homey Sarah doing with a jivin’ operation like this?”
“Tooth, this isn’t jive. This is destiny!” Nubia persuades.

The next day in the Bahamas the Joker is wondering how Tooth is doing.
“I wonder how my favorite denominated henchman is doing.” Little does he know of Tooth’s burning internal conflict!

Back in New York Sarah is touring Tooth around the factory where the resistance force is located.
“Here’re your quarters” she says and finishes the tour.
In his sleep Tooth decides to go with the side of the drug lord if the Black Spider hasn’t put him out of action yet.

Meanwhile at Morgan’s,
“No. I’ll never do it again. Please spare me!”
“You get one last chance Morgan. After that you’re through.”

The Choice of Tooth; A cameo by Vibe

At Justice League Detroit Vibe sends Vixen to get some groceries. As Vixen walks there she runs across the factory serving as the headquarters of the black minority workers. She chooses to check it out.
“Hey y’all what’s this foxy mama doing here?” asks Tooth. Tooth was once arrested by Vixen.
“I know you. Did you break out of jail or did you serve time. You won’t do wonders for this team’s moral support.”
“We could always use a fellow Super Hero.” Nubia exclaimed.
“If you’re just gonna pick up any foxy mama on the street then I’m gone,” says Tooth as he walks out the door.
“I’m going to Morgan.”

Give me an e-mail adress and I'll send it.

Print it and tape it to all your shirts. I'll delete it after sending it to you so it'll be one of a kind.

Tape it? I'm going to have a Tooth tee shirt printed.

An Eye For an Eye a Tooth For a Tooth

The next day Tooth runs into Lois Lane as a black woman. The terribleness of her dress knocks him senseless making this a very short chapter.

While he awakes he gets a costume. The atrocity of his costume makes the Black Rider want to kill him. Will he survive? Tune in next time.

The thread is dead but what did you think of "jive"? I'm trying to make it the background on my computer. It's not working.