You think you're tight with your friends and colleagues?

Ollie recognized Wonder Woman when no one else did. Wonder where he's looking.
Well, no. You're not. Not compared to the Silver Age Justice League, who always speak in sequence.

"Some fun playing catch with comet, wasn't it, Superman?"
Shut up, Hal, you snotty brown-noser. You're embarrassing Barry, and poor Clark's practically crawling under the table. Thank gods Daddy Batman's there to give the kids a distracting parlor game.
Do you think it's easy to speak in sequence in a group of 4, 5, 6, 7, even 8 people? It's not. Finishing one another's sentences? Creepy. Like, old-married-couple creepy.

Oh, Snapper. I don't know what we'd do without your peppy cheerleaderism. Move to Detroit, I suppose.
So tight your evil anti-matter universe counterparts can do it, too.

"Special preparations"? Apparently, Owlman is the only CSA member not embarrassed to shop at the Pleasure Palace.
So tight you'll wear one another, unconscious, in your tiara. That's tight.

"Speaking of twenty hours--"
What are you, Hal, a game show host now?
Completing each others very thoughts. In sequence. In civilian identity. Shudder.

Note that they're on vacation, and don't know the others are there and they're STILL doing it. Really really creepy. Not quite "hitting on your underage Kryptonian cousin" creepy, but close. I think J'onn used to make them do it; you know, play with their minds, like his little puppets. Then they found out. One bic later, JJ's not in the League any more.
Yes, folks ... it's one of THE TOP TEN CLUES YOU'RE IN A SILVER AGE JUSTICE LEAGUE STORY: 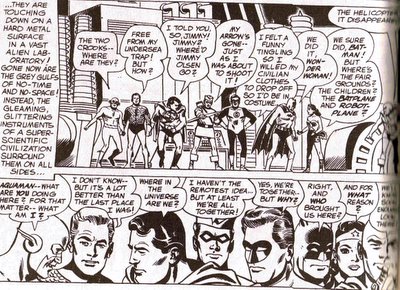 Serialocution.
Posted by Scipio at 9:11 AM

I love the look on Wonder Woman's face in the fifth picture. She looks like my mother used to when all five of her boys decided to just go bat-sh*t crazy all at the same time.

Naturally, Hal gets the best line:

"I felt a funny tingling so I willed my civilian clothes to drop off..."

Happens a lot, I bet.

Look again at that first picture.

Barry is the one that recognized Wonder Woman, though as you suggest he is clearly not looking at her face.

Green Arrow is stunned speachless by the sight of the Atom's ass.

It just goes to show you how thoughtful and considerate the Silver Agers are. They politely wait for one teammate to finish talking before they jump in. Their manners are impaccable and beyond reproach.

I do think it's pretty impressive that they line up properly before everyone starts speaking. How do they know where to stand? It boggles the mind, it does.

Ollie recognized Wonder Woman when no one else did. Wonder where he's looking.

Since she never wore a mask, and her face looks exactly the same, obviously he's not only looking at her face, he's the only one looking there!

Finishing each other sentences like an Old Married Couple is creepy, but a sweet sort of creepy. I am begining to realize that this is something I miss in comics these days. Sure, it was just a result of having lot's of expository dialogue and needing to give seven plus characters equal time. But it does give the sense that these people not only work together, but are comfortable with one another and enjoying being together. I certainly prefer "Old Married Couple" Justice League to "Married with Children" JLA or "I'm only here for the photo ops" Avengers.

Silver Age Serialocution: When you're here, you're family...

Come on Everyone! We can do it too!

If we try, I bet we would have no trouble finishing each other's ...

Speaking of not following you, who's this Diana Meade character J'Onn was with on vacation? I've never heard of her. Was she a shape-changing octopus?

Diana was a fellow detective on the Middleton police force.

Note also that Ollie Queen is with Bonnie King, the original Arrowette and mother of Cissie King, the Arrowette from "Young Justice".

I bet you thought they made up that backstory just for YJ, didn't you?

Who has more bastard children?

Ollie (two that I can think of off the top of my head)?

or Arthur (again, two, and one was with his wife, only she wasn't at the time and it might not be his.)

Now that you mention it, are they ever going to deal with Cissie King-Jones connection to Ollie? I know they have effectively replaced her with Mia (WHY?!) but she'd be a perfect protege/legacy to huntress (Helena Wayne--even though no one remembers her. Maybe they will after Crisis). And with the brooding "almost killed a man" thing, and Helena was in Infinity, Inc. So why not a shot at the JSA? And give her short brown hair, not black or blond like every other teen heroine?

Wow, I am always off topic. Sorry guys.

Because er retirement was very, very good, and should be left alone.

I feel woozy after reading that.

Read it the wrong order and you'll fall out of your chair...

The Los Angeles Central Library (which is just a few block away from where the Black Dahlia was last seen alive) has the first volume of the JLA Archives. I read the whole thing in one sitting and suffered severe wooziness for several hours. (The tips of my toes, fingers and ears went numb.)

That got me a black eye on the subway.

He willed his civilian clothes to drop off?

In that last picture, Wonder Woman's obviously not been listening:

Unless, of course, no-one ever listens to Hal. Actually, thinking about it, that's probably more likely.

But I'm sure no one is listening to Hal. Certainly not after that stupid "comet chasing" comment earlier....

Today it would be done "70's Show" style with the camera whipping around to each in turn.

I'd comment on the rest, but I'm too busy giggling at the poor unconscious Atom situated in Diana's tiara.

Poor Ray! And don't I remember a time where Diana carried him in her bustier? Or was I imagining that? No, I'm sure I saw it.

Great stuff, keep it up Scipio!