I'm sure there are versions of Vixen I could stand, but I swear I haven't seen them yet.

If you've been reading this blog for a while, you've already encountered Vixen as a member of the much-maligned Justice League Detroit. That's pretty much the only place I've seen her (except on the JLU cartoon, where she was annoyingly insecure), and almost everyone in the Detroit League was portrayed unpalatably.


Vixen, the brainchild of nobody's favorite writer, Gerry Conway, was supposed to be introduced in her own series in August of 1978, the first DC black superheroine; very big deal, lots of house ads. Unfortunately for her, her intended series was a victim of the DC Implosion in June of that year. If you really want to read it, get a copy of Cancelled Comics Cavalcade, it's in there. Conway later snuck Vixen into an issue of Superman (#251), before his big break came and he got to put her in the New Justice League (Detroit).

Does that make me a bad guy or did Vixen overshoot? Who can say?

Vixen (Mari McCabe) was the child of a minister who was the president of the Central African fictionation of M'Changa (where, improbably, they speak Swahili, an East African language). He was killed in a military revolution led by his brother, Vixen's arch-enemy... 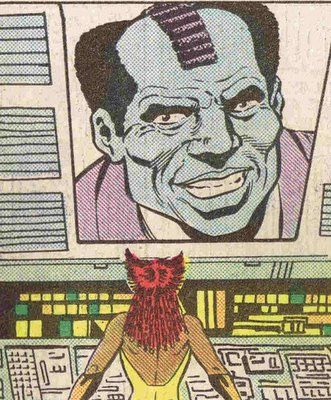 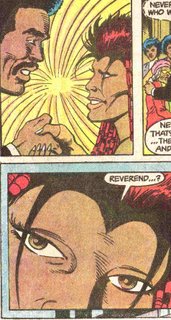 Just kidding; sometimes I vary my DC humor with a little D.C. humor. That's her uncle, Gen. Mustapha Maksai. She escaped the revolutionaries along with the Tantum Totem, a magical tribal doohickie that can grant "animal powers" to members of her family, and did what any sensible person would to hide herself from her Uncle's assassins: she became a world famous supermodel and superheroine with the world's most identifiably hideous hairstyle. "They'll never find me here on the cover of this month's Vogue!"

I'll spare you any more panels of her repeatedly hitting on J'onn J'onnz (ew!) and making out with janitor Dale Gunn in the Utility Room (eww!!). But at right she's using her animalistic sexual mojo (with accompanying suggestive line-motif) on a Man of the Cloth. She met him on the previous page, when her reckless vigilanteism sent a convertible flying into a crowd of his parishioners. Gee, a minister, just like her daddy. How ... creepy.

Fanboy Fantasy Mishmash with Daddy Issues? Who does that remind me of? Oh, yes.....

DC's first black superheroine should have been something fabulous, iconic, elegant; Marvel's was. Instead, she was just was one half of the Salt & Pepper shakers to Dale Gunn's sexual appetite. Such a pity...

So THAT'S what Norman Osborn was doing while out of the Spider-Man comics.

Once you're through with the JL-Detroits, somebody ought to get you a set of the Suicide Sqaud run...

That's right.
I was just trying to spare the details.
Besides, Suicide Squad rulz!

I did dig Vixen's appearances in Animal Man--instead of her being a bizarre sideline in JLD, it made her capable of being an actual character.

Dale Gunn, though. Come ON, Mari.

Hey! My Word Verification is perfect for the Absorbascon!! "JL suee."

Does anyone else think Vixen is what happens when you expose impressionable comic book writers to naked pictures of Grace Jones?

Only knew her thru Morrison's Animal Man; thought Truog drew her very . . . nicely.

More recently learned her origin through an online copy of Cancelled Comics Cavalcade that Dorian Wright linked to and thought, "My God, it's the Catwoman movie!"

That Suicide Squad story where Vixen and Speedy team up with the Squad to fight drug lords...that's a great, great story. Say, what ever happened to Briscoe--you know, the Squad's chopper pilot who named his helicopter after his dead daughter and had an icky relationship with it? Did he die? That guy needs to be in more books.

Briscoe's dead, Prof. He and Sheba got wasted on Apokolips.

Briscoe died in a valiant last stand on Apocalypse.

So, probably not up for being in more books. Unless it somehow turns out that his personality merged with the wrecked helicopter which was then used by Darkseid in forging Steel's latest armor or something...

I didn't know Central African residents (or maybe just the despots) were blue.

She was a hell of a lot better in Suicide Squad. I mean, miles and miles worth of better. (That may possibly be because people like Briscoe oustripped her anyday in weirdness factor, or just because she had a better writer. I prefer to believe the latter.) Suicide Squad's not hard to find, really. (The original version, I mean.)

I rather like her in JLU, at least visually. They managed to make her power actually look exciting, while in the comics it's usually a yawner.

I thought Vixen's costume and overall look was just okay, especially once the Kajagoogooness of her hairstyle was toned down in Suicide Squad.

Then I saw what she originally looked like. Yikes!

Kajagoogooness is my new favorite word.

I would definitely trust Vixen to guard the ports, though.

(I liked Vixen in JLD. But I couldn't come up with anything substantial to say in her defense. And, yeah, the whole Dale Gunn thing. Yuck.)

Her ports don't seem particularly guarded to me!

I know Marvel started it, but why is it that these first generation black heroes had to be from Africa? Are there no black people in America who could get bitten by a radioactive spider, struck by lightning or doused in experimental chemicals? Were black heroes from Africa somehow considered less threatening to white readers?
And at least Vixen got to be a supermodel and wasn't stuck with the default occupation of nearly all other black heroes: social worker. Even Black Panther, who's a frickin' King, goes undercover as a social worker when he first comes to the States.
And don't even get me started on Native American heroes! "Apache Chief," jaysus haych keerist!

You are sooooo right: the General is a dead ringer for Barry... spooky

I like the JLU Vixen too. And Suicide Squad, that was a good run.
It's not fair, judging a character by their appearance in JLD. Nobody came off well in that.