I'm not sure I've ever mentioned it before, but I love the Legion. It's the most DC-ish of the DCU, what with its wacky Silver Age extended continuity, and the most Marvel-ish as well, with its one-power teenagers and their little high school dramas. Shouldn't everyone love the Legion?

I guess that's what DC is counting on for its new LSH animated series, being jumped on current episodes of JLU (for which we get the scene below, courtesy of the wonderful Legion of Super Heroes Blog): 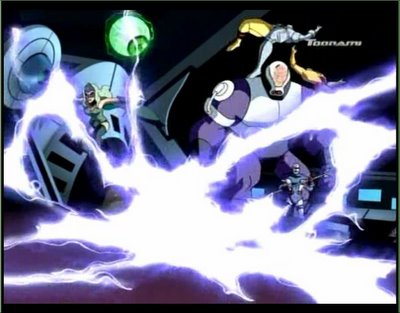 Which leads to the point of this post: I'm terrified of the Emerald Eye of Ekron.

I guess I was just at the right age when I first saw the Fatal Five, who were presented, matter of factly, as scaring the Legion. Five beings who could take on the whole Legion and usually fight them to a standstill? Yipe.

The Emerald Eye. It's a disembodied, floating eyeball of unknown original. Ick. That's bad enough. But it use to kick Superboy's butt regularly. The pre-Crisis Superboy. Shudder.

Although next to nothing is known about the Emerald Eye, despite it being featured in many stories, we do know that it exists in the 20th Century (Garrin Bek of L.E.G.I.O.N. had it for a while). Why doesn't DC dig it out and throw it against the Green Lanterns? They might know no fear, but I sure would!

My nightmares are not haunted by the Joker, or Darkseid, or Anton Arcane. It's always the freakin' Emerald Eye...

You speak the truth, Scipio. The Eye is terrifying.

The most mysterious thing about the Eye to me is the fact that it is, for no readily apparent reason, vulnerable to Kryptonite.

Mystic relic of the Old Gods?

No one knows what the Emerald Eye is. No one ever will.

Wasn't there some story somewhere, that sprung on us a fact we (well, 'eye') had never realized but that made perfect, utterly logical sense: that there was two eyes out there?

That was in LSH. McCauley got a hold of the second one...

I, too, love the Legion. The Eye itself freaked me out less than it in combination with the Empress. Until Levitz made her a tragic figure (just before she died), the EE was probably the most psychotic, disturbing member of the Fatal Five. Validus was a kid, the Persuader and Mano were out for money, Tharok wanted power, but the Emerald Empress liked to hurt people.

Good news and bad news about the JLU episode, by the way. Good news: It's being written by Paul Dini. Bad news: Warners has said it has nothing to do with the proposed LSH 'toon, it's not a pilot. So we'll still have no idea what the cartoon LSH will look like...

Yeah, and whatever was unpleasant about you the Eye would exacerbate it, making its owner nastier.

Remember during the interregnum Legion, how Cyrra Whatsername got rejected at Tryouts ...

and THEN got the Eye?

Do you know where the American Eye Institute is?


DAMN that thing scares me...

Is the Eye scarier as a mere Superboy smashing weapon, or when it talks?
"Eye will."
Yeah, I'm gonna go with talking on this one.

Hmm, so somewhere out there in the universe, there is a rather large being called Ekron who is very, very blind.

I wonder what other disembodied body parts of his are floating around shooting at people?

Heh. Ekron is a place, actually, not just in comics but in "our world".

Ekron was an ancient city in Canaan.

Akron Ohio and Ekron Kentucky are both named after it.

Wasn't there a period where the eye was really in control of the user?

Any one else notice that the malevolent Brother Eye has the same speech pattern?

Hey, thanks for the "wonderful" comment! I think I'll use it in my promotional material. That was a huge pain in the ass to screencap the whole episode. It took me 4-5 hours total.

The "two eyes" thing started in the L.E.G.I.O.N. series. Although I'm a Legion trivia junkie, I don't remember what happened. I think one of them got destroyed, and the other was supposed to hang around for 1000 years or something.

The JLU episode was written by Dwayne McDuffie, with screenplay by Dini. For Jonathan and Chris: where did you hear this about the new Legion series?

Ariel: Beware of the Left Pinky Toe of Ekron.

The first thing I saw about it was this article. (NYT registration required) Bits and pieces have come out since then--do a Google search--that tells us the 'toon is still in development. No word on how far things have gone; I suspect WB animation's waiting until JLU is done to ramp up production, but that's only speculation on my part.

Dang, couldn't get to the NYT without paying for that article.

I did uncover a blog by a guy named Shawn, though, who is the voice of Timber Wolf on the show. Next week the voice talent and the bigwigs are having their first meet-n-greet, and they'll start recording their first lines.

I've been following this over on my Legion Blog. Supposedly the JLU production staff has been let go and a number of them are working on the Legion series.

I too am terrified of the Emerald Eye. I have composed a haiku to celebrate its horror. First, in Japanese:

And now in English:

A LSH cartoon.
I am positively hyperventilating. I cannot wait.
This better be true or I will be very sad.
Long Live The Legion!

The Emerald Eye(s) belong to a giant Green Lantern named Ekron.
He appeared in 52 somewhere.

The writer is totally fair, and there is no question.
metal buildings