Let's put a little Red and Green together for the 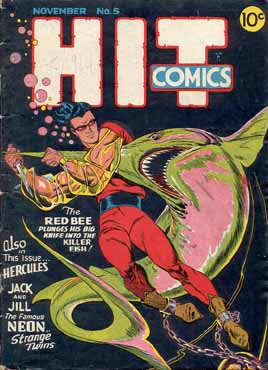 Green Arrow could use some pizzazz in his Green Team (particularly if most of them did, in fact, just get blown up in the most recent issue of his book). So let's bring back ...

and make him part of the team!

It's a natural. Arrows sting with their pointy tips; so do bees. Ollie's a hip metrosexual; why shouldn't he have a gay buddy?

Everyone laughs at the Red Bee because (like many Quality Comics creations), he looks like a total flamer in his diaphanous pink blouse (well, that and the whole "fighting crime with bees" schtick).

Go with it, I say: MAKE him a total flamer. Face it, we live in a post-Queer Eye world; being gay (and, possibly, truly fabulous) isn't exactly a media taboo any more, so DC should wake up and smell the cappucino.

Groups are named after him. He's got a long history. The Brits like the name. He's a lawyer, which Ollie could probably use for all those paternity and sexual harrassment suits. He helps kids learn. He was in both Starman and Animal Man ... and the Absorbascon (if that don't make ya cool, what does?). Blockade Boy has given him extra outfits (although, for me, nothing says "My disguise must strike terror into their hearts" like pink gauze).

Anyway, I am serious about putting the Red Bee in the Arrow Family. Ollie's going to be mayor of Star City soon; he'll need a District Attorney, which is what Rick Raleigh (a.k.a. The Red Bee) does. GA wouldn't lose any readers, I daresay, and gay readers and non-gay fans of the Red Bee (both of them) would swarm to the book like, well, bees to honey.

"Oh, he's too LAME or SILLY," someone is preparing to type. Wake up and smell the cappucino, folks. Detective Chimp? Captain Carrot? Brother Blood? The Red Bee's time has come.

Besides, if you think the Red Bee is too silly, then you're probably not reading Green Arrow anyway.
Posted by Scipio at 8:25 AM

Ollie's going to be mayor? Whaaa?

I can only assume that this is definitive proof that Star City is populated entirely by people with the intellect of ceiling fans.

By the way: I defy anyone to find more pure comics fun this month than Showcase Presents: JLA

And anyway, for about 1/13th of the readership whose rods and cones are -- ah, differently abled -- putting the Red Bee on the Green Team wouldn't really be a big deal. To us, he'd fit right in.

We anomalous trichromats are an easygoing people. Wear enough mismatched dress socks over the years, and you get a little perspective.

Why did nobody think of this sooner?

Somebody get DiDio on the phone! NOW!

It's a good team, but it's no "put Brother Eye in the Teen Titans".

How about 'he's too DEAD'? There's already too much Hadean revolving door-ism going on in this universe; if even someone as lame as the Red Bee can buy a ressurection then death will have entirely and irrevocably have lost its, erm, sting.

Now, an all-new Red Bee; a next generation Bee; that could work just fine...

I was thinking of "the Anomalous Trichromats" as part of the Star City rogue's gallery, actually.

"an all-new Red Bee; a next generation Bee"

Oh, yes, certainly: I didn't make that clear. The new guy would be following in the tradition of the old one, that's all I meant.

Of course, it would be amusing for Ollie to reveal that he used to hang out with the original one in the Afterlife...

Hmmm... perhaps he's a bee that has become human.

I dig it. Cause bee stings suck. Even if you're Doctor Light, you don't want a be sting. Its just damn annoying.

Just don't make the next gen incarnation a dude that shrinks and talks to bees with his helmet. That combination is lame enough to make him a Marvel character.

Great idea, but who will be the new Red Bee?

If the internet is to be believed, after Crisis, we'll have:

All this secret identity musical chairs gives me an idea. Picture the orange shirt with the candy cane tights.

I like the idea, and it's not like the current Green Arrow title couldn't use some flamboyancy.

I just fear that under Winick, Red Bee would get beaten up/killed by some skinheads and we would have A Very Special Issue about hate crimes.

I'd rather just have some fun stories about fighting crime with bees.

"I just fear that under Winick, Red Bee would get beaten up/killed by some skinheads and we would have A Very Special Issue about hate crimes."

But then Ollie would get mad and do what any sensible hero would...

Can he forget his space helmet?

Because that would be comedy gold.

Team Green was blown up? Ollie becomes mayor? How dare you not post spoiler warnings! Actually, I'm just kidding about that. I get powerfully annoyed at people who visit blogs and message boards to talk about comics but don't want any information given away. Morons.

But anyway, DC needs to bring the Red Bee back. Sure his whole crimefighting M.O. is pretty goofy (he has trained bees, man!) but that's what I love about him. Too many characters are revamped to be "cool" and suffer from it.

Whether they put him on Team Green or a new Freedom Fighters (my personal choice), the Red Bee needs to be brought back.

"Too many characters are revamped to be "cool" and suffer from it. "

Amen to THAT! I'd rather read about Ted Knight than Jack any day.

In all fairness to Rick, he used bees (mostly his pet, Michael) quite sparingly. He was your basic golden age butt-kicker with a "stinger gun". He was like the Green Hornet, without the chaffeur.

Putting his knife into a killer fish...sounds like an Aquaman crossover is what he's really after. Plus it's...kinda gay sounding.

Actually, there is very little that is LESS "gay sounding" than the metaphor of "plunging his big knife into the killer fish".

The Red Bee should be a totally hip, totally stylish, outrageous, flamboyant HETEROSEXUAL.
And everyone in town should be certain he is gay. Now that's a secret identity!

I want to read your comics online.