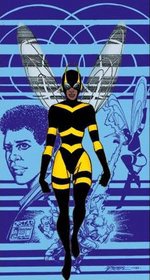 Hey, where Mal Duncan goes, can Bumblebee be far behind?

Poor Karen Beecher. She's brilliant, pretty, and spunky. It's not her fault she got mixed with those anti-Midacian Teen Titans, who've ruined every character they've ever touched (at least until that catchy tune by two perky Japanese girls broke the curse).

Poor Karen Beecher drove me away from comics. It's true. I remember, it was adolescence, that dangerous time when we stop being able to enjoy comics as children do, but aren't yet ready to enjoy them in the way adults do. A Bat-villain fan, I had to buy the Teen Titans issues where Two-Face (even though they were atrocious) guest-starred. The main plot already had me teetering on the abyss, but when Karen decided to throw together some "webshooterish" accoutrements as part of her scheme to dress like a giant bumblebee, that started killing my interest in comics (till senior year in college). 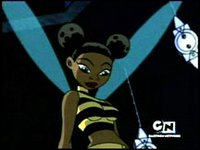 Thanks to the Bumblebee, I missed the Wedding of Donna Troy and Terry Long, which might have restored my faith in comics. Damn you, Karen Beecher!

Actually, I've forgiven her; she is just SO cute on the cartoon show! That's a Karen Beecher I can enjoy (all thanks to those two little Japanese girls!)
Posted by Scipio at 6:36 AM

If Hush had some japanese girls by his side, he would be awesome

Hush: At last I have devised my foolproof plan for destroying Batman!
Mie: This big plan, Mister Hush?
Kei: In Japan, only big thing is GODZILLA!
All: (laugh)
Hush: And now, our musical guest, Mister Steve Lawrence!
Mie: Oooh! Steve Lawrence. He very big in Japan.
Kei: He big like Godzilla!
All: (laugh)

"all thanks to those two little Japanese girls!"

Why? Did they summon Mothra or something?

No, the wrote the Teen Titans song.

How could you not love a girl in Afro Puffs?

Why does she have bowling balls stuck on her head? Ah, never mind. I'm out of my element. I have no frame of reference.