No, no. Not Black MASK; he's not black. Black MASS.

Geoffrey Thibodeaux (Black Mass) is actually on a poster in my den (the one quartered to make the covers of the first four issues of the Justice League Detroit). He's one of the people fighting the JLD as part of the Cadre, one of the worst supervillains teams of all time.

Suffice it to say, he was a small-framed physicist who was given some wrist bands (by a ridiculous cosmic villain, the Overmaster) that gave him a huge bulk and some black hole-ly kind of power (kind of like Chunk).

Anyway, Geoffrey got his butt kicked by the Justice League Detroit (which is not something you put on your resume), lost his wrist bands later in a poker game, and had his greatest career moment after he was dead. Yes, below is the corpse of Black Mass during the "Joker's Last Laugh" crossover. Black Mass, you'll probably not remember, is the reason that the Slabside Penitentiary is in Artarctica; his reanimated corpse was used to transport it there. It's better if you don't think about it.

Though dead, he got better, but is still brain-damaged, which may explain why he was willing to guest-star with his former cellmate, Dr. Polaris, as opponents of the Power Company (yet another great resume bullet). Astonishingly, Black Mass has appeared twice on Justice League Unlimited. He must have one HECK of an agent. 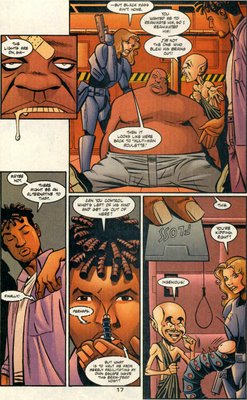 where did THAT sequence come from? Is that Mister Mind? Oh, I love Mister Mind...

I think he was a physicist, not a physician.

Yes! Dr. P getting some love at the Absorbascon!

Foo! Yes, Mike, you are right, thank you; I was just typing too fast and will fix it now, thanks to you!

where did THAT sequence come from? Is that Mister Mind? Oh, I love Mister Mind...

Last Laugh. It is powerful in its absurdity.

By the way, I'm going down to DC today and there's a solid chance I'll be going to Big Pla...err... Monkey Comics some time this week. The blogosphere may implode, or something.

If you see me introduce yourself; and Devon will be there today, too.

By the way, I'm going down to DC today

Just be careful the vice-president doesn't mistake you for a quail...