The Inevitability of Vibe

So, for this post, you have my wicked friend Noah Van Google to blame. Noah’s an egger; he’s that kid who never got in trouble in school, but was always egging YOU on to see what would happen. Then when Hilarity/Horror ensued, the teacher turns on you and there sits Van Google, smiling sweetly with a little halo over his head.

So, Van Google recently decided to throw peanuts through the bars of my cage at the digital zoo by pointing out—on my FACEBOOK WALL—that Newsarama recently listed VIBE as Number One on the list of “The 10 WORST Justice League Members of All Time”. Okay, Noah; consider the bear baited.

Now, as long-time readers may remember, I have addressed this very issue when egged on to reply a comment by Steve Englehart listing Vibe as “one of the four worst Leaguers of all time”. So I feel no need to address that specific point further. Heck even, the writer of the offending Newsarama article conceded:

“…there's something charming about Paco Ramone's short-lived existence, whether it was his overconfidence or excitement about being a superhero in the first place. Vibe also has a particularly important place in Justice League history as being the first Leaguer to be killed in the line of duty, launching an unfortunate trend that would continue for a long time afterwards. If only he'd joined up with a different team that dealt with smaller problems, perhaps Vibe would still be with us today, and perhaps he would've evolved into a character people remembered as more than a gimmick gone wrong. Who's for a new Vibe ongoing series in the next round of DC New 52 launches?”

To my ears, that’s pretty much a concession that Vibe is not only NOT number one on the list, but shouldn’t be on the list at all. He certainly doesn’t argue that any of the others characters on the list should be brought back, let alone get their own series!

But I will take it one (or more) step further: I posit that not only will Vibe return in the New52, but that the return of Vibe verges on inevitable. And here are the reasons why…

It's good Paco has a superpowers, because his career as an avant-garde interior designer was going nowhere.

Yeah, yeah, I hear you laughing. I’m not referring to Vibe’s IQ or personality; I am referring to Vibe’s concept. Vibration powers? Got it. While what exactly he can do with such powers is still open to exploration, there’s nothing intrinsically vague about them (as there is about, oh, pretty much every single member of Stormwatch except Midnighter & Apollo, but only because they are Batman & Superman expies). His personality—vivacious, optimistic street kid with a bit of a chip on his shoulder—is also fairly easy to understand, represent, and stomach (when properly portrayed). He’s pretty much a modern version of Robin (with superpowers).

Even sepia tones cannot dim the glory that is Vibe.

Both literally and figuratively, Vibe is a colorful figure. Now, you can dismiss this as unimportant. But the fact remains that wan and colorless characters simply do not do well in the long-run in comics. You can make fun of the shiny spandex types, but they remain after scads of less vivid—or, as they are so often style, “more realistic”—characters have faded from view. The costume, the dancing, the flair; face it, Vibe is a fun, larger than life character, and those are superhero comics’ stock in trade. 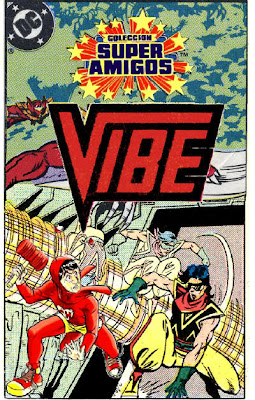 I’m not one for ‘ethnic quotas’, certainly, but DC has definitely expressed interest in having their character roster reflect a more modern diversity in (American? World?) society. As a Puerto Rican (not Mexican, I’m always amazed when people get that wrong, including the writer of the aforementioned Newsarama article), Paco Ramone would fit easily into that plan. Certainly much better than that drunken caricature, Yolanda Montez, or that double-mockery, Extrano.

Vibe has a high Q factor. 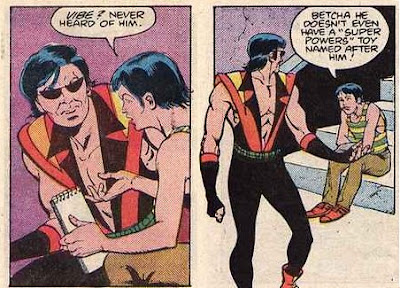 Shut up, ghetto boy, who cares what you think?!

Like it or not…most people still know who Vibe is (was). Look again at that list on Newsarama. Aztek? Bloodwynd? Faith? Vague, indistinct, and unmemorable. Any time you want to discuss them—as rare as such times must be—you have to explain who they are, and probably have a lot of difficulty doing so. Despite having died years before any of those characters were introduced, Vibe is still known and discussed (for good or for ill). In fact, one of the Abscorbascommandos tells me Vibe will be one of the characters appearing in the upcoming “DC Shorts” as part of Cartoon Network’s “DCAnimated Hour”; I’ll bet you a can of Soder and a Big Belly burger that Aztek, Bloodwynd, and Faith will NOT be.

Of course, when you stand like that, it's obvious WHY you stand alone.

Much like the cheese, Vibe stands alone. And by that I mean, Vibe’s origin or existence do not hinge upon any other character or event, so he can be reintroduced at any point. This may seem like a small or silly point, but it isn’t. There’s a huge host of DCU characters you cannot say this about (e.g., Blue Beetle, Huntress, Nightwing, Donna Troy, Wally West, the Detroit Steel, the Elongated Man, Bart Allen, Power Girl, Mister Terrific, the Metropolis Steel); because their origins are tied into predecessor heroes or specific events from “the OldDC”, their reintroduction causes immediate problems, questions, or revisions. Vibe could be reintroduced next week as a newly emerging hero being recruited by, well, just about any group in the DC. Other than Stormwatch. Although the idea of Vibe blazing around the gloomy abstraktervolk of Stormwatch is hilarious; it would be like having Lady Gaga crash Dowton Abbey. 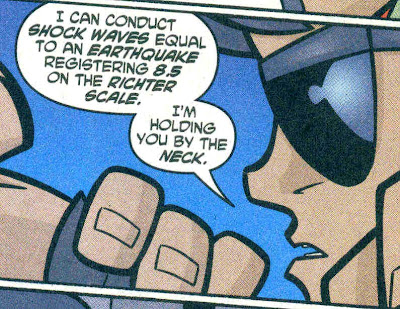 There’s lots that can be with Vibe’s power. Although still unique, his power has similarities to Black Canary sonic scream and Flash’s vibratory powers… ones that they have done pretty well with. First of all, his raw power is pretty substantial: the power to use harmonic resonances to shake a building apart, wreck a bridge, or start a tidal wave is overwhelming (though mostly destructive). But readers love imaginative applications of powers (such as the Flash’s use of superspeed to vibration through things or Mera’s recently displayed ability to suck the water out of people who make the mistake of pissing her off) and Vibe is ripe for those (make Vibe as able to sense vibrations as he is able to cause them, and you get a world of possibilities). And as a character (rather than just a superhero) Vibe has great potential as the kind of tough, wisecracking, happy-go-lucky hero that made the Golden Agers such exciting role models. 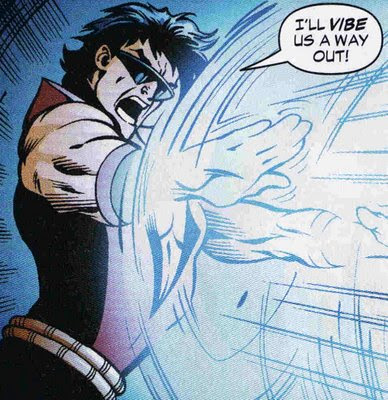 Like a gay Puerto Rican Batman, all he needs to win your heart is time to prepare.

Most of the negative associations with Vibe, face it, have to do with two things: being part of the “non-A list” of the Detroit League and associating him with the breakdancing craze in the 1980s. The first one is easily dismissed—don’t put him in the JLA (at least not right away)—and the other is, frankly, silly and date. I hate to break it to all you dance-haters but… breakdancing may have entered popular consciousness in the 1980s, but it didn’t exactly disappear. Let’s start with Step Up (2006), Step Up 2 (2008), Step Up 3 (2010), and Step Up 4 (2012). Broaden that to Dancing with the Stars, So You Think You Can Dance?, America’s Best Dance Crew—you yourself may not be part of the dance scene, but I (and the alumni and faculty of Garling’s Greater York Dance Center) can tell you that plenty of people are.

Glory awaits those who redeem him. 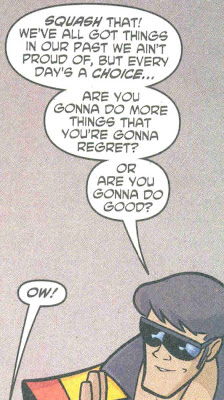 Quick, what is Geoff Johns famous for? And, no, “severed limbs” and “weak endings” don’t count, wise guy. The answer is fixing the unfixable: Flash, Green Lantern, Hawkman, the Justice Society. When explaining how Geoff became such a towering figure in current comics, you’re not going to say, “Oh, he wrote this amazing story about X, or used X innovative writing technique”. You’re going to say, “He fixed X, Y, and Z, elegantly and definitively.” Because, while readers do like writers who create great new characters and stories, they like much more writers who make existing characters that readers already know into great characters with story potential—particularly those familiar characters and “guilty pleasures” who have fallen on hard literary times. You can joke about it all you want, Internet: but the writer who pulls it off will have the last laugh... and my thanks and admiration.