Can You Solve It Before We Do?


During a chat with some other comic book afficianados about 52, one said, "Well, I'm no longer worried that it's going to be 'The Challenge'." "Indeed," another chimed in, "but DC Challenge was, I believe, the last time until this month that we saw Space Cabby." Suddenly, a voice from the Monkey Youth (they follow us everywhere; you know, to drink up wisdom) squeaked out, "What's The Challenge?"

Some events, like the Holocaust, My Mother The Car, the Great Crash, and Beanie Babies should never be forgotten, lest they be repeated. The DC Challenge is one of them. What DC did to the original Secret Society of Super-Villains by accident, they did to DC Challenge on purpose: change the writer and artist with each issue.

DC Challenge was intended as a carefree romp through the pre-Crisis multiverse. The first issue set up a story with lots of characters and lots of unsolved plot points. Each successive issue had to follow from that, and do the same. It was like 52, but with no plan and without the creators being allowed to talk to one another. Guess how that worked out? 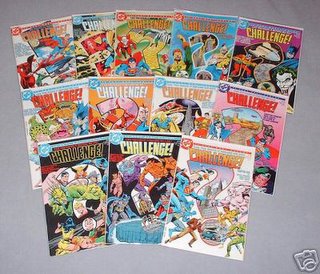 I think people are remembering it more kindly than it deserves. Instead of being an engaging relay race or parlor game, it came off like a 50 car highway pile-up. Wrecked storylines with plot points dangling off them, smashed into each other; bloody, wounded readers everywhere. Even today, merely looking at the covers can hurl grown men jibbering in a fetal position. Thank goodness characters are invulnerable.

Since it's an article of religious faith that DC, like Batman, always has a Master Plan, I think that DC create the "DC Challenge" to make us WANT to say good-bye to the multiverse.

Do you remember the Challenge and what do you think?

I tried this with the university newspaper. We started a serial fiction where "new" writers would pick up each week where the last one left off. After I had to write two in a row I killed off everyone rather matter of factly.

This is one of those ideas that always seems appealing but has rarely been executed well. Wasn't there a movie called Four Rooms that tried something similar?

Must you drain the joy from all my childhoods memories?

DC Challenge was one of those things so bad that, even having lived through that time, I've repressed memories of it. Sorta like Super Powers, except I remember that one.


Makes me wonder what comics of today are destined to be repressed by our unconscious desire for a happy past?

"Makes me wonder what comics of today are destined to be repressed by our unconscious desire for a happy past?"

Strangely enough, I'm re-reading these now, and I actually like them. Yes it's a car wreck, but one done out of love, where creators use the characters they loved and dance madly through the surreal DCU.

The world must be told - via plot synopsis!

Oh, come on sir. About all I do recall was Aquaman being left in the desert to die of lack of water in one issue. In the next, he played dead until a vulture came to feast on his carcass...

...and he grabbed it, snapped its neck, and used the water in its blood to restore himself.

Can we top that today?

Space Cabby was last in Starman, as far as I know.

Four Rooms had plots writter and directed by four directors taking place in the same hotel with a bellhop running back and forth between them.

I remember at the time that I liked the idea, but that DC Challenge was one of the first books printed on the shiny, expensive paper, so I passed. If they'd gone with the 'normal' paper and price point for the time, I might have been traumatized too.

Anyone have a list of the writers involved? Any currently big names?

I liked it. I relished in it's cheesyness and one-up manship when it came to the plotlines. I wouldn't recommend it to anyone wanting a seriously good comic, but for wackiness it's perfect.

Recalling the DC Challenge fills me with self-loathing. What seemed like a great idea at the start had proven to be a poor one by issue 6, if not sooner. And yet, I purchased and read all 12 issues. Yet another exercise in poor judgment by young H.

What a terrible series.

A train wreck? I love train wrecks! Despite the dire warnings, I'm going to see if I can track these down. Somehow I don't think we'll see a TPB of The Challenge any time soon.

You know, a plot synopis, or (more accurately) an occurrence recap on
"DC Challenge" is right up Comic Treadmill's alley...

I'll have to dig it out and re-read it, but by and large, I liked it!

The problem with this sort of thing is that all the writers really need to stick to the letter and spirit of the "rules," and shouldn't go off on a wild tangent without at least closing a plot thread or two. And IIRC, a few particular writers really messed things up more than they needed to be.

The photo in the post is from a currently running Ebay auction, so you should be able find them there...

And may God have Mercy on your Soul.

I remember something about Jimmy Olsen and somebody (Plastic Man or some such) on a world where the Nazi's won WWII. That's some seriously messed up stuff right there.

It was a train wreck, but at least there was no "waiting for the trade" writing style.

If they did this nowadays then Bendis could just write a whole issue of talking heads where nothing happens and fulfill his issue in no time flat. I don't there there was any actual rule about advancing the plot or anything... :)

Oh, and Space Cabby showed up in Starman between the Challenge and this month.

I remember The Challenge being neither particularly good, nor outstandingly bad... it was just kind of dull. I think the problem was, the writers wouldn't let themselves be completely wacky -- they'd introduce goofball characters like Space Cabby or Detective Chimp, but then the story would still be played straight. And really, what could be less interesting than a serious Detective Chimp story?

More than anything, it reminded me of Marvel's old "Contest of Champions", which was also full of goofy characters who were treated way more seriously than they deserved.

The only issue of DC Challenge I eve read was bound with the second third of Crisis on Infinite Earths #12 as a French reprint....

It was soooo bad. Didn't Batman have to try to save a busful of nuns or something? I remember it really went downhill after Gerry Conway got his crack at it.

I haven't re-read this since it first came out, but I vaguely recall Mark Evanier had to cheat and break the rules about writers not being allowed to talk to each other. I think he set up some silly "add up all the numbers in the calculator, then the numbers spell out a word" puzzle, and the writers that followed him got confused, so they threw out the rules and asked Evanier to solve his own mystery.

I enjoyed the idea of the series when I was a kid. It still seems like a fun idea. But "execution" is much more important than "premise."

I got it when it came out. They had some weird deal where you could actually subscribe to it, too. So, living out in the middle of nowhere, I subscribed. It was really really fun. I still think they should do another one. The fun was trying to figure out where the writer had intended the series to go and then where the next writer actually went with it.
I don't think they had to cheat with the calculator bit because the last issue was written by everyone and in that issue they explained it. I think that at some point someone else came up with another explanation for the numbers and they had to say that basically everything that happened because of that other explanation was just by accident and heres the real solution.
...almost exactly like Identity Crisis!

I finally got my hands on DC Challenge after I missed it when it first came out.

Gotta say it's disappointing, and a couple of writers really played hardball and messed everything up.

Could have been a lot better since it was the last pre-Crisis multiverse story back then.

"And really, what could be less interesting than a serious Detective Chimp story?"

Message from the future: in our time, ALL Detective Chimps stories are serious stories.