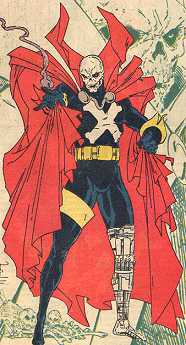 Okay, if there are people who didn't know Croc was black, are there also people who don't know that Mr. Bones, the director of DEO, is black?

Probably. He's another one of those characters whose race is (suspiciously?) obscured by his powers or costume.

Three guesses who created/designed him. HINT: does he remind you of anyone?

In additional to the absurdity of his design, uselessness of his powers (a cyanide touch? invisible skin? WTF?), he came with horribly off-putting "character touches" like the cigar (how many 20-year-olds smoke cigars, for pete's sake?), a smart mouth, and talking in rhyme.

I'll repeat that. Mr. Bones talked in rhyme. Always. For no reason. In the real world, people who try to pull stuff like that -- well, there aren't any, but if there were they'd get beaten up twice daily (unless they had a convenient cyanide touch, I suppose). Rhyming is bad enough, since rhyme is the McDonalds in poetry's restaurant row, and is usually absent or used lightly in real poetry. But, let me tell ya, A.E. Housman wasn't writing Bones' dialog, so every word balloon was with filled with sub-Hallmark, arhythmic doggerel that made you embarrassed to know English.

If DC gave me the task of creating a character that would annoy the maximum number of readers possible as consistently as possible, I would create Mr. Bones. Oh, and for those who are wondering, his leg was eaten by shark. Who was his adopted brother. You don't really want to know.

I hate the fact that he appears to have been editorially made the director of DEO simply because he looks dramatic, without any evidence or background that would prepare him (a former kidnapper!!!) for the position. Okay, DC, you really shouldn't have to live in Washington to know that the heads of national security agencies aren't people under 30 who didn't go to college.

Anyway, now that I think about it ... perhaps it's better if no one knows Mr. Bones (jeez, give the guy a first name!!!) is black.

Okay, DC, you really shouldn't have to live in Washington to know that the heads of national security agencies aren't people under 30 who didn't go to college.

But still, truth is stranger than fiction, no?

Three guesses as to who created him? Well, given that he's an annoying character from Infinity Inc, I suppose my first guess would be Roy Thomas, or possibly Dann Thomas.

Oh, I know who you WANT to blame (and I'd love to blame him too), and he can take full credit for the over-the-top skull design with the cyber-leg. But the speaking in rhyme and smart mouth? That's pure Thomas magic there, that is...

I try not to think about the time/age distortion thing - I like him as the DEO head. I think he's a great example of taking a bad concept that DC owns the rights to and doing a GOOD revamp to it. I figure with all of the time reboots and/or time travel around the DC Universe, there's no real reason he couldn't be 40-something at this point - its not like we've had an unbroken string of "The Adventures of Mr. Bones" that have to be explained away.

And, speaking of Infinity Inc, you ever notice how useless the poor kids have become? They started out as Legacy characters, but post-Crisis (and especially recently) they just seem kind of pointless. Mr. Bones seems to have come out the best of them (possibly because he's a non-Legacy), but they really have become the whipping boys of the DCU, haven't they?

In other news, the sky is still blue...

Haha, I was just about to post a comment about the 24 year old working at Nasa. When was Mr. Bones's first DEO head appearance? I'm curious which writer came up with that.

I can possibly think of a way that a young villain punk would join a secret organization and rocket to the top during some super special 12 issue mini series involving clones, a crazy goldfish and betrayal by a loved one, but technically I like to see such a story arc before promoting such a punk to such a job

I kind of like him in his current incarnation: Just a skeleton in a suit. Its kind of creepy, and if i was smarter i'd prolly see all the sympolism to the "empty suit" business... whatever.

McFarlane. Jesus. If Spider-Man and Ghost Rider never existed, what would he rip-off?

Mr. Bones made his Travolta-like career comeback in CHASE, mofo.

HOW he became the head of the DEO was a secret the series promised to reveal, but didn't 'cause nobody bought the book and it was cancelled.

NO legacy character fares very well. Look at what's happened to any "2nd generation character". Only the original Teen Titans have fared well (and even that is debatable). Look at the New Mutants, the X-Terminators, the Academy X kids, or any latter-day superhero who has been a member of the JLA, JSA, or Avengers.

I always disliked Mr. Bones and his entire family from the Infinity, Inc., though I've mercifully forgotten most of the details.

Mr. Bones as DEO chief makes no sense whatsoever - the name thing aside, I'm pretty sure he's a convicted felon, too. Killed Skyman (the first Star-Spangled Kid), at least, though IIRC it was more negligent homicide than murder.

Infinity Inc. was such a failure I bought the first issue for 50 cents or a dollar. It was that much of a failure and I just bought that issue. Not 25 years ago. I've only read the New Teen TItans crossover with Infinity Inc. and the Millenium series. Normally I love Englehart but I really hate that series. You just can't tell what is going on.

Just bought it aweek ago I mean.

I bought the whole run for $5 plus shipping on e-bay a year ago. I couldn't get through it all.

Leave it to Roy Thomas to take good characters and then create stories where they talk you to death.

It's one of the reasons I enjoy the new JSA book so much -- occasionally the characters shut up.

Word Verification: "ngfeazbx" --
what they take for headaches in Zrff.

I hated Bones, until he became a suit. He went from Proto-Image character to one of the more charming and bizarre background elements in the DCU.

He's also one of the few Infinity Inc cast members to have come out better than he started. The rest have just been trashed over and over, for the most part.

Ouch. I knew that you were probably going to lambast poor Mr. Bones when his turn came up this month, but I hoped I was wrong.

Well, at the risk of being called a heathen lacking any tatse, I enjoyed the heck out of Infinity Inc. I even went on record on the Treadmill claiming Mr. Bones was favorite character in the series, rhymes, adopted shark brother and all, and I stand by it. Sure the series had plenty of warts but the good outweighed the bad. For me anyway.

And although I'll admit to being too lacking in energy and fortitude to respond to all of the Bones-Breakers commenting, I will point out that Mr. Bones killed Skyman with his touch, but only because Solomon Grundy grabbed Bones and pressed Bones' hand to poor Sylvester Pemberton.

OK, how could a cyanide touch ever be used for good in a super-hero career? It's NOT a power that one associates with puppies and kittens. I'm assuming that sicne Infinity, Inc. weren't one of those new-fangled supergroups that leaves a trail of bodies everywhere, he just sort of sat around while everyone else did stuff.

I do not envy DEO Agents during a negative annual review...

"I enjoyed the heck out of Infinity Inc"

it happens in the best of families.

Plus, you can never go wrong with a character whose origin includes a supervillain gynecologist. That's just...ew.

Perhaps someone was doing a little too much LDS when they came up with that one...