So, many readers are confused and outraged at the omission of some of their favorite black characters: "How could you omit so many of DC's premier and famous black characters?"

Actually, I didn't try to omit anyone; I tried to include characters you might not have otherwise known (e.g., Gravedigger or Tooth). Face it, any DC reader who doesn't know who Amanda "the Wall" Waller, Green Lantern John Stewart, John Henry "Steel" Irons, Michael "Mr. Terrific" Holt, or Jefferson "Black Lightning" Pierce are can't be that interested in Black History Month anyway.

But to me, the fact that I was able to omit them says more about the state of black characters than I ever could. There was a time when you wouldn't have been able to profile one black character a day -- not even in February. But nowadays, you can do it and still have a passel of popular black characters left over. That's an improvement.

Some black characters are heroes, some villains; some are brilliantly interesting, and others are shallow, tedious stereotypes; some are big players, others are just rolling heads across the asphalt. But that's okay; that's how comics are.

Time was, all you got was this: 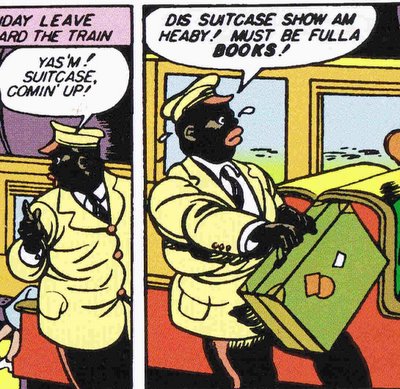 Hmph. That show am heaby, indeed.

I don't think we've achieved "perfection" in the quantity and quality of black characters in comics (whatever that would mean). But, hey, it's a lot better than it used to be.

Visit the Museum of Black Superheroes; add a character!

In dealing with any representations of black folk in the media you can say we've come a long way but there is still a long way to go. I always disliked BHM while I was in school (Yeahh, PG County Public School!) because the same ol' same ol' gets dragged out - MLK, Benjamin Banneker, Harriet Tubman. Good job on not focusing on the same ol' same ol'.

I agree, but I disagree that we're making progress. It's taken 80 years to get a (couple) months worth of characters. Most are still throwaways, or just retreads of previous characters or names (Dr. Midnite II, Marvel's Captain Marvel (although she did become a really cool character before they . . . screwed up her powers)).

The thing is, what was the last great, enduring African-American character you've seen appear? I think Grant Morrison has made greater strides in one year (with Mr. Miracle and the Manhatten Guardian--both Kirby Kreations) then had been made in the five years before that.

Gravedigger, though. I gotta go dig (groan!) some of those up.

I bet you could easily do it again next year with no repeats.

(In addition to the 'big guns' you mentioned, you've still got Invisible Kid II, Kid Quantum I, Onyx, Orpheus, Bronze Tiger, J.J. Thunder, Josiah Power, Skyrocket, Peek-a-Boo,Thunder, Shilo Norman, Black Racer, The Manhattan Guardian, and Xero, just off the top of my head. Of course, one of these guys might be today's pick unless it's Ebony White or whoever that kid was...)

Ehhh, you're just trying to cover for your woefully tragic lack of Suicide Squad knowledge. :)

Given that the series starred Amanda Waller, Ben "Bronze Tiger" Turner, and Mari "Vixen" McCabe, it could be said that the Squad was the most inclusive, color-blind team ever.

Good sir, I want to do my part to get you a proper education. I'd be more than happy to contribute to the "Submit Scipio to Some Squad Schoolin'" scholarship fund. Do you take PayPal donations from random creepy strangers on the Internets?

I wasn't disappointed that you omitted the popular black heroes and villains, but I was looking forward to your take on the Black Racer, from the New Gods stories. Mainly because someone who rides on skis and kills gods is pretty much rediculous.

And what about Black Spider?

"Given that the series starred Amanda Waller, Ben "Bronze Tiger" Turner, and Mari "Vixen" McCabe, it could be said that the Squad was the most inclusive, color-blind team ever."


Ummm, "Thing?" Can we put an emphasis on The "SUICIDE" part of SUICIDE SQUAD?!?

Most Black folks really wouldn't want to be on such a team. It has no benefits.

Black Racer is no more ridiculous than a silver guy who rides a surfboard to help somebody else eat planets.

Personally, I always considered the Black Racer a bit of a jibe at the Surfer and Stan Lee..

Most Black folks really wouldn't want to be on such a team. It has no benefits. -- Devon

Which seems to me to indicate that those members were especially noble, awesome, heroic, tragic (insert favored adjective here) for participating.

Standin up for kirby --
The Black Racer visual was indeed bizarre, but the idea that his "host body" was paralyzed but became the Black Racer when he was "needed" -- that seems quite Grant Morrison to me.

I also have enjoyed Morrison's Shilo Norman stories, though it is not clear to me at all how much of those issues took place in Shilo's mind ... (probably I should reread them in a month)

Hey, I just thought of one more: Bucky! From the Super Patriot as Captain America VI stories by Gruenwald. He later became Battlestar and I think was killed off. The last issue I have with him is #350 and it gives his first name as "Lemar." You gotta admit, that's pretty obscure.

Okay, just read up on him at the Museum of Black Superheroes. He was evidently illiterate and was later lynched. What a lovely role model!

Which seems to me to indicate that those members were especially noble, awesome, heroic, tragic (insert favored adjective here) for participating.

Indeed. They were also the ones who didn't wear the explosive bracelets either. They tended to be the good guys on the team whereas the 'whites' like Deadshot and Captain Boomerang were the bad-guys.

The thing is, what was the last great, enduring African-American character you've seen appear?

And what was the last great, enduring white American (or any other nationality for that matter) you've seen appear? Who doesn't just retread previous characters or names?

Hey, I just thought of one more: Bucky! From the Super Patriot as Captain America VI stories by Gruenwald.

Your BHM series was very appropriate. I kept expecting to see Machiste (from Warlord) and I figured you were saving him for last, but I figured wrong. Machiste is a cool character though. Who else has a spiked ball on the end of his arm and a hot Russian girlfriend?

D'oh! You're right; I inadvertantly reprogrammed the parameters of the test.