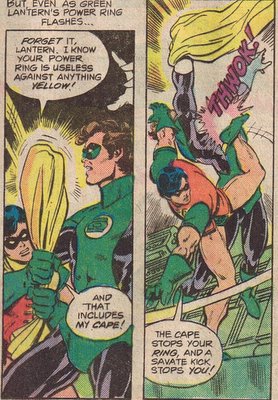 It's bad enough that Hal is Batman's bee-yotch. But the Boy Wonder can kick Hal's butt while snottily explaining it to him, in case Hal's too stupid to get it. "I'd really rather not dirty my gloves, Lantern," Robin snorts, "so I'll just kick your head in, instead!" Holy insult to injury!

Oh, the Batfamily/Lantern team feud is older and deeper than it looks, folks. Yep, the original Green Lantern had Gotham as his turf, then abandoned it, letting the city spiral into social decay so bad that little rich boys had to watch their parents get shot in filthy alleys. If you were a little boy who'd lost his parents to crime, mightn't you blame the hero who'd given up on keeping your city safe?

Deep stuff there, for a writer willing to explore it....

Pic courtesy of Devon of Seven Hells
Posted by Scipio at 12:03 PM

Man, you know what's funny? Dick Grayson was like..a MILLION times more effective as Robin than he is as Nightwing...

I'm curious where that scene is from. Is it Teen Titans? The ease that Robin beats him makes me wonder why every GL villain just doesn't carry a yellow cape with them.

"Dick Grayson was like..a MILLION times more effective as Robin than he is as Nightwing..."

That is very true, and you're the first person I've heard who had the guts to say it.

Actually, he only becomes ineffective when Chuck Dixon and Devin Grayson write him. Nightwing kicked butt in Wolfman/Perez Titans. Nightwing could have taken out GL without the cape!

Once again, the Sensational Character Find of 1940, T.C.O.B.! Dick Grayson is the undisputed crown prince of the DCU. Like every good father/son relationship, Batman has learned as much from Robin as Robin has learned from Batman. He taught Batman everything Batman knows about teamwork and people skills (frankly, I think he taught Superman everything he knows about it as well). I have been inspired to composition:

Brubaker linked Alan and Bruce in his "Made of Wood" arc in Detective. (A link, I might add, that could not exist in the Multiverse...) It is mostly a compare/contrast, though, and a soapbox to say that writing is like detecting, and not a deeper sociological exploration.

Alan did appear in one of those B&W backups however, and Batman nearly flat out asked "Why don't you use that ring to keep little boys' parents from being gunned down in dark alleys?" Alan uses the ring to turn back time (only 24 hours), and point out that yes, he could stop all crime just by wishing it, but is it really good to have that much power? (Typed "really god" at first...) Those eight-pagers were great for little character development scenes that just wouldn't fit anywhere else.

"I'm curious where that scene is from. Is it Teen Titans?"

It's from New Teen Titans #4 (Feb. 1981), in which the Dr. Light-led Fearsome Five send the mind-altered Titans to fight the JLA.

"Green Lantern: Ain't That a Kick in the Head! A Memoir of Superheroing, Little Blue Men from Outer Space, and Repeated Head Trauma" by Hal Jordan is a bestseller in the DCU.

"Chapter Nine: Brained by a Rock."

"Chapter Twelve: Kicked in the Face by a Teenage Boy in Elf Boots."

On average, Marvel powers are more abstract and DC's are more concrete; see my November 3, 2005, post on Hypostatization.

It's a wonderful idea, Scip. However, someone took a stab at it albeit before the JSA were so solidly part of Earth 1.

There was a vigilante who came before Batman. Rather mean fellow who retired. He makes a comeback and clashes with Batman.

I think it was Year Two? Not so good, unfortunately. Honestly, I think Alan was so far before Bruce's time it wouldn't have occurred to him much to blame Alan for not being there. (Alan might do so, though)

>>There was a vigilante who came before Batman. Rather mean fellow who retired. He makes a comeback and clashes with Batman.<<

The Reaper, yeah. They actually showed Alan Scott fighting him in a flashback once (I think it was in the Black Canary issue of "Secret Origins"). Alan totally pwns him, until the Reaper happens to toss some wooden nunchucks at him -- they get through Alan's shield, natch, and knock him out cold. Reaper beats a hasty retreat, and supposedly that was the reason he left Gotham for so many years -- he was afraid he'd have the whole JSA on his ass.