Ah. "Hornblower". I think I rented a movie called that; as I recall, I pay late fees on it, and happily. 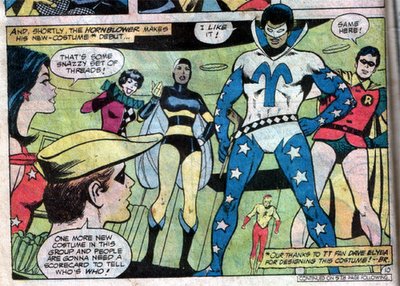 Okay, that's the single most unintentionally hilarious male superhero costume I've ever seen (with the exception of the "Wonder Man" and "Super-Lad" costumes in that one "world where everyone's genders are reversed" story). It's the belt that really makes it. We all owe you, Dave Elyea (who went on to work on Kalamazoo Comics)!
For those who don't know, that's Mal Duncan, the not even slightly stereotypical, streetwise, racist-gang fighting, jazz trumpeter who plays at a nightclub called Gabriel's Horn and winds up with the magical horn of Gabriel. As J. Jonah Jameson would say, what are the odds?

Anyway, the Horn does stuff when Mal blows it. Exactly what it does I couldn't tell you; something about extradimensional portals. Maybe Mal is the ancestor of Tyroc, another extradimensional black guy with a traffic-stopping costume and irremediably vague sonic powers? He would be if Bob Rozakis ruled the world, and, oh, what a world that would be.

Simply reading Mal's origin will give you a headache, because it's chockful of proper nouns like Limbo, Gargoyle, Antithesis, Cyberion, Technis, and (my personal favorite) Omegadrome. I swear I used to skate at the Omegadrome when I was in Junior High.

Mal regained his dignity by staying away from the Titans, marrying Karen Beecher (we'll get to her later!), and opening a coffee shop. But now he's out in space with Donna Troy fighting the Enormous Metaphorical Mitts of Alexander Luthor, where, given the extradimensional nature of the problem, he might actually be a great help. Or at least more than Animal Man.
Posted by Scipio at 3:34 PM

Ah, Teen Titans #49. That's the very first comic I can actually remember buying back when I was but a wee lad of eight years old. It will always hold a special place in my heart. I never could figure out what the symbol on his chest was supposed to be, though.

And Robin seems to be checking out more than the costume.

I believe that's the Universal Symbol for "when I blow a horn, magic happens and portals open wide..."

Actually, it's the Zodiacal symbol for Aries, because he had a magic ram's horn. Y'know, even tho that's the ugliest costume I ever designed (I submitted several, and DC picked that), I still think Perez topped me with the Herald (who at least had a slightly less embarrassing name, but I had nothing to do with that)--the "H" on his stomach even beats my "groovy" 70's belt...sigh

Hey, Animal Man shot lightning out of his face at those giant hands. Actually, I'm just glad that Donna Troy told Ollie Queen she only needed the most powerful heroes and then took Buddy, Red Tornado and freaking Bumblebee. That made me feel good.

Yes. After something like $100 spend on Infinite Crisis related books and such I'm still waiting for DC to pull something out of its ass about why Donna Troy & Company are even remotely important to any of this story.

I can only assume that Herald & Bumblebee wound up on Donna Troy's "Save The Universe Team" because the Toon Titans had given them a new lease on life (Mal played--literally--a decisive role in the defeat of the Brotherhood in the animated series, where he also sported his least ugly costume to date).
I had kind of hoped that when Mal's turn came in this BHM reveiw that you'd mention his real career highlight--back before DC decided that that it was better for "realism" and "characterization" for all past character development to have been the result of a magic spell, instead of things that had actually happened to the characters over the years, Mal was the one responsible for Dr. Light's famed inferiority complex. Back in TT #44 (the start of the Rozakis era), Dr. Light recieved his most humiliating defeat ever when Mal (now as the Guardian) took him out, after Light had previously dismissed Mal as the Titans' janitor. That was the real point at which Light lost it. I dunno, I still like it better when characters change without magic spells. I guess I'm just old-fashioned, and certainly unrealistic...
I'm "still in comics" to a certain extent, managing to get something out every few years just to prove I'm still here (most recently, a Christian super-hero called The Sancturian), but mostly I run a comic book store, which takes most of my time.

I kinda liked Mal Duncan as the "You All are CRAZY!" non superhero hanger-onner in the original Titans series.

Sad how he was killed off in 1972, and NEVER CAME BACK, and certainly never dressed in blue spandex with white stars and LA LA LA I CAN't HEAR YOU!

Don't use the words "Mal" and "Dignity" in the same sentence, man.

"Mal was the one responsible for Dr. Light's famed inferiority complex."

That's a story that needs reprinted and revisited, now that Dr. Light and Mal are both running around.

"I believe that's the Universal Symbol for "when I blow a horn, magic happens and portals open wide...""

If it were upside down, he'd be Captain Starbucks.