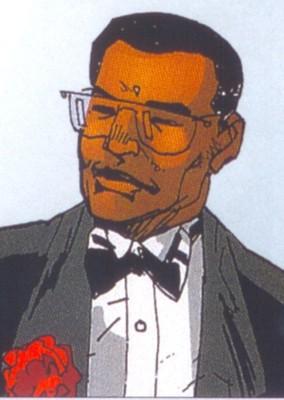 Have you seen this man?

Once upon a time he was Lucius Fox, CEO or CFO (or something like that) for Wayne Enterprises, the guy who really ran the gazillion dollar worldwide financial empire, that employs thousands, creates new technology for the improvement of society, and changes the lives of millions with its philanthropy and responsible development, while its owner dresses like a bat and chases guys in green leotards covered with question marks.

He's so important that Hollywood's Black Actor With The Most Gravitas, Morgan "Easy Reader" Freeman, played him. At least, I think that was Lucius; I can't hear anything Freeman mumbles, and I've seen his last 30 films, all of which came out last year. Even the one with the penguins.

Anyway, Lucius Fox is really good at what he does. So good that no one's seen him do it for years. Yes, while millions of people learned to like Lucius from Batman Begins, he's been virtually absent from the Batman comics for, gosh, since before No Man's Land. I mean, this is the guy Ralph Ellison was writing about.

Have you seen Lucius Fox? Contact the authorities immediately.
Posted by Scipio at 6:40 PM

I vaugely seem to think that he's been in a Coma since sometime around Bruce Wayne: Murderer or right before...

But I could be wrong; it might been since the Earthquake. Either way, pretty sure we're talking six-year-long comasville...

Considering what happened to Leslie Thompson, it's probably just as well.

Lucius made a brief appearance at the beginning of the recent Red Hood storyline, informing Bruce Wayne that some of his neato bat-gadgets were being produced for military use. That kind of pissed Bats off, hm. I haven't seen him since, though. Hope a big chunk of the Rock of Eternity didn't fall on him or something.

I believe he was involved at the end of No Man's Land, where Bruce had him foil Luthor's attempt to buy up most of Gotham under various dummy compianies.

Wait a minute -- it was Lucius Fox narrating that penguin movie? Damn, I KNEW that voice sounded familiar.

" I keep track of these things, Clark. "

I always liked Lucius- you KNOW that he knows that Bruce is really Batman. He's just biding his time. Wait, whuh?! What happened to Leslie Tompkins?!

In one of those big, 80-page jobs that are half fill-in stories, there was a story a couple years back where Lucius finally sits Bruce down for the year's profit and loss report. Bruce sits there, looking bored and making glib jokes; while Lucius ernestly (and cluelessly)reviews all the assorted hardware Wayne Industries lost over the course of the year. All of it appropriated by Batman of course. Kevlar suits, subway rockets, a crane..."Who loses a crane, Bruce?"
It's just a little throwaway story, but it works on a bunch of levels: explaining how Batman pays for everything ("Write it off.") and how Bruce has to act in day-to-day life. Now if I had any idea where it was and who wrote it...

"What happened to Leslie Tompkins?!"

In short? In order to fufill the editorial mandate that Batman be returned to "loner" status, she was made responsible for the death of Stephanie Brown (Spoiler).

Was it a mandate to bring Batman back to "loner" status, or was it more of putting Batman through the ringer in preparation for Infinite Crisis (and, by extension, One Year Later)?

I've figured that all of the doins' that have been transpiring for the last couple years have been with an eye towards stacking the deck towards "the worst days of the heroes lives" - the whole Leslie/Spoiler storyline certainly qualifies...

PLEASE tell me you're kidding.

as Saint Vibe would say,

The mattress-thing was actually a cocoon that held real-Jean dormant while her psychic-self died, or some such nonsense. That was the contrivance to get her back amongst the living to hook up with the other original X-Men for X-Factor #1.

Jean Grey's resurrection was the most shamelessly hackish retcon I'd ever seen... until I read Green Lantern: Rebirth.

As for Leslie Thompkins: my understanding is that Spoiler was killed by Black Mask to restore Bats to loner status, while the blame from her killing was retroactively placed with Leslie Thompkins to give the editors an excuse to keep Black Mask uncaught.

One should note that the story makes it entirely plausible for a future writer to re-retcon it to "Thompkins faked Spoiler's death to get her out of the superhero life, then accepted the blame for her death to further the coverup" should any future writer want to.

Kurt! Kurt! Did you see this? Tell James. Tell Shreck and Michael and Matt and Natchie.

Wait, you mean the 80's are over? Shit! I knew Bowling for Soup was trying to tell me something.
And why couldn't Black Mask stay uncaught even if he had killed Spoiler? It's not Joker was still running around for years after he killed Robin (or didn't, thanks to another ludicrous resurection of the dead with the whole Red Hood nonsense).

And why couldn't Black Mask stay uncaught even if he had killed Spoiler? It's not Joker was still running around for years after he killed Robin (or didn't, thanks to another ludicrous resurection of the dead with the whole Red Hood nonsense).

Joker was "dead" for a while after Jason Todd's death - at least "dead" in the "a thing blew up and we never found his body" sense. And when he turned up a couple years later it was a genuinely big deal, because this was the sick disgusting bastard who had beaten Batman's sidekick to death.

After Spoiler's death, Black Mask was never caught - he was running loose and running the Gotham underworld at the end of the crossover. It felt like a kick in the teeth to not even bother with the pretense of punishment here - Black Mask was just running around loose because it suited the purpose of the editors and writers who needed him for the rest of the "Red Hood" arc, and in the meantime you had a Batman who didn't seem to care about getting justice for his dead sidekick. So to alleviate this, the blame for Spoiler's death was shifted off Black Mask - who now can run free for a while - and onto Leslie Thompkins. Of course, at the end of that arc, Batman makes no attempt to bring her in, either.

All I have to say is, I hate all editors who allow this type of insanity.

And, of course, Dr. Tompkins is tossed in the crazy-trash alongside the Spoiler--HA! Two women in one shot!! DC hasn't scored like that since . . . oh yeah, wait! Jean Loring and Sue Dibny.