This is a story that's been talked about again and again and again and again and unfairly criticized here. And it's easy to make fun of it (and, yes, we will make fun of it). But too often people turn up their snotty post-modern hipper-than-thou noses at its bronze age goofiness and heavyhandedness. "Tee-hee, that was their idea of a race story; how quaint!" At least in 1970 somebody was willing to talk about "the color problem", instead of nowadays when society seems to have agreed to pretend that all black people grow up on the Cosby Show. Odds are, people who trivialize this story don't remember what 1970 was like. 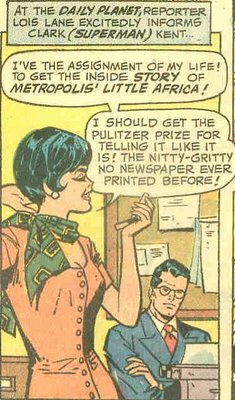 Well, I, for one, stand up for this story. It was trying to make some points, and it did. I defy any of you modern scoffers to write a better story that demonstrates hubris denuded, two-way racism, urban decay versus community spirit, the lures of crime and drugs versus the rigors of self-respect and self-reliance, the unity of species, the heroism of the common man, freakish alien Superman "passing" as a white human, and people overcoming cross-cultural suspicions. In 14 pages. Do it. Oh, and heat vision; you must include a "gangsters being astonished at their melting guns" scene.

Note the stunning efficiency of the set-up panel. The plot is set up and while "Little Africa" is not the subtlest or most realistic name for Metropolis's black ghetto, remember this is being written by the man who created Dr. Domino. The artistic values lie not with subtlety but with clarity and efficiency (that's a general rule in older comics). Through her words and stance, we the readers (many of whom are kids, remember) understand immediately and unequivocally that Lois is being a conceited, pompous poseur.

If there are any doubts, look at Clark, who's got his patented look of Kryptonian disapproval that says, "You morally repulse me, foolish human woman-child, and if you'd ever shut yer yap I might have married you years ago. Better change to Superman and keep an eye on you, ready to save your silly ass and watch you learn yet another painful lesson while I chuckle and wink at the readers."

Naturally, Lois goes to the hood and gets snubbed by schoolkids, a perambulator-pushing parent, a tenement-dwelling single mother, and a limping blind old woman. The only person who even acknowledges her existence is an itinerant Angry Black Dude, whose personal mind-slaves carry him around a platform so he can lecture them at various streetcorners (and, boy, were they relieved when he got a blog instead). My favorite one is the guy in the beret who's visiting from Metropolis's Little Gayborhood; he's clearly much less interested in demonizing Lois than in picturing the guy with glasses naked.

For the record, the Dude's name is Dave Stevens, one of the whitest names imaginable. Is Kanigher that trapped in the conventions of bland comic book names or is he being intentionally ironic? Who can say?

This section of the story has been criticized for not justifying the black characters' animosity as a natural result of their poor treatment by the white majority, to which I say "piffel". First, when Lois becomes black we experience that poor treatment first-hand through her, the character we already are supposed to identify with. That's a lot more efficient and real than pages of blathering about the historical background of society's ills. Second, Bob Kanigher is not interested in justifying any kind of predjudice. Period. If you want comics that justify bad behavior rather than inspiring people to rise above it, then go read Marvel.

Anyway, this being a Lois Lane story, Lois wheedles Superman into changing her temporarily into a black woman so she can get her story. More on that, later...

"Go read Marvel?" You know, there was a time when you and I would've had words over that statement; of course there was a time I was being breastfed, but that is neither here nor there. Poor Marvel (a single tear falls from my eye)...

Shouldn't the phrase "heat vision" be written in a pure white font?

It should, say I.

Yep -- it may be a heavy-handed story, but the idea of taking a priveleged character and having them experience life as an oppressed minority goes back at least to Laura Z. Hobson's novel GENTLEMAN'S AGREEMENT and the Oscar-winning film based on it, which Kanigher was surely emulating.

Trivia Extra!: Laura Z. Hobson's son Michael is known to comics fans as Marvel's publisher during the 1980s, and the model for Avengers liaison Raymond Sikorski.

Secrets behind the comics revealed.

Why this story is mocked while the Green Arrow/ Green Lantern comics are revered just boggles the mind. Why Hal didn't just tell the old black man "Listen, pal, I've saved the entire world a dozen times over. I have a god damn magic ring. Tell me how I'm supposed to use that to end racism and I'll do it. Until then just shut your trap." I'll never know. I think super hero comics as a whole are not the ideal place to be dealing with issues of race, especially considering the vast majority of them are written by middle aged white guys.

It's always fun watching child of wealth Ollie Queen ridicule itinerant toy salesman Hal Jordan for not digging the real deal on the streets. (Please correct me if I've missed the story where Ollie made his fortune with his own two hands, but I think he was cast in the 'idle playboy' mold.) DC could possibly have made more of the battle between upper-class liberalism and working-class conservatism - and with Roy harper a recovering addict brought up by Native Americans, his own unique perspective on the US political system could make for some powerful commentary! They could bring John Stuart along to chip in with some well-chosen words from Socrates and Guy Gardner and Kyle as the 'men in the street'. And Vibe's ghost. For some reason.

There is more story on those 2 panels than in most comics published today.

I certainly understand the sentiment, and agree that a lot of the GL/GA stuff can be over blown, but I think superheroes can be a GREAT place to deal with race, as well as many other hot-button political issues.

Normally as an example I'd point to Watchmen, but I'm not above flattering our celebrity guest and suggest you pick up Marvels. Whereas the usual X-men comics examine the problem from the opressed minority's point of view, Marvels #2 showed it from the "racists" point of view, demonstrated that while racism itself is still very wrong, racists are more scared and ill informed than evil.

And yeah, comics were written mostly by white guys, but they were white Jewish guys, and we know a little bit about being an oppressed minority.

Black people were ALSO aliens--from Krypton, no less! And from the way they dress, at least we know that some part of Kal-El's forbears were down wit' tha P-Funk.

I have a theory.

On Krypton, all black people were on an island. In Metropolis, all the black people are kept in "Little Africa". In the future, the first black member of the Legion of Super Heroes comes from an island made up of an entirely black poulation. Coincidence?

Obviously Superman's real goal is to recreate Earth in Kryptons image. How to acomplish this? Somehow it involves rounding up all people of of different skin tones and putting them on an island. I don't get it either, but Kyrptonian culture can be downright odd sometimes.

Sadly, Lex Luthor is unable to stop Superman's mad plan, and by the 31st century Earth resembles Krupton in all it's silver age wackiness. This has to stop. Please re-elect Luthor in 2008. I don't want to live in a world where all black people have to live on an island.

I always liked this story. I think it's an honest attempt to look at racial inequality and it succeeds better than many more sophisticated attempts in recent times.

I think he was making a joke on the fact that there has been at least one naughty flick with the "Curious Black" title, and not referencing the original "Curious Yellow" source material.

Gee, if Kurt B. has time to read ABSORBASCON, maybe Scipio knows more about the new Aquaman series than he is letting on...

what say you fearless leader?

(Gosh I hope I am correct in thinking that Busiek is writing Sword of Atlantis, or this comment will make no sense!)

All I know is what I read in the papers!

Child of wealth though he may be, Ollie recognized the idleness and corruption among people at the top, and has taken steps to curb it. Robin Hood started out as a rich gentleman too.

Hal Jordan, on the other hand, has kept himself sheltered away from social issues. Whether in a test module or on another world, he never steps out of his luminescent green bubble to take a look at a picture that he can't see from his vantage point as intergalactic policeman, above the concerns of individual people.

Steven,
Yeah, you have a point about super heroes being used as metaphors (the Mutant issue of MARVELS is a perfect example of that, as you said) It can come acorss as trite and silly at times, but when well done it really does work.

In 1975 I was 8 years old. I lived in the rural suburbs of Oregon. I had never seen a black person in real life.
That issue of Lois Lane was in a pile of comics I bought at a garage sale. I went from completely ignorant of race relations to a rudementary understanding.
Yes, my comprehension of the problems were still crude after reading it.
But that comic opened my eyes to the reality that there were problems.
The comic was written to educate white kids that didnt have a clue about racism. It worked.