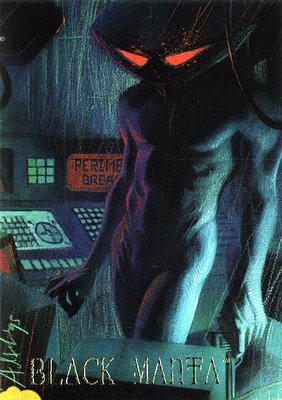 Originally, Black Manta was just one of those characters that Bob Haney cobbled togetherfor Aquaman out of nothing at all: Villain in Diving Helmet.

Years later, somebody finally had him take the helmet off, and we got to see that he was black. Part of Manta's motivation, he reveals, was that, having given up on the idea of equality for black people on land, he hoped to form a more equitable society underwater.

Sometimes this gets misinterpreted as black separatism, but Manta always seems to have some white guys in his gang. In recent issues of Aquaman, those white guys seem really stupid; I think the Secret Society is forcing some Affirmative Action on our man Manta and these dumb crackers are Goon School dropouts.

Poor Manta got stupidly monsterfied in the "Underworld Unleashed" crossover (just like his white counterpart, Killer Moth), but Rick Veitch fixed that and brought us back the real Black Manta.

Far as I know, Black Manta's real name has never been revealed. Part of the groovy mystery of it all or just another example of a black character getting short shrift? Who can say?

People sometimes make fun of Black Manta because he got a less then stellar rep during his days on the Superfriends. But for me, Manta's got the "autobuy" power: if Black Manta's in it, I buy it. He's the first villain ever really to strike a personal blow against a hero, when he killed Aquaman son. As such, Black Manta was the herald of our New Era of Villainy. He's also the "highest-ranking" black villain in the DCU.

So show Black Manta some respect. Or else.

Maybe Manta's got some white guys on his staff just in case he needs to pick someone for a suicide mission.

They've already made enough mistakes for ME to push them out the airlock. C'mon, Manta! Feed 'em to the sharks!

And he happens to have the most striking, yet simple, costume any DC villain has to offer.

Black Manta is the Condoleeza Rice of DC SuperVillains.

(I don't think anyone has ever written that sentence before.)

So Black Manta outranks Houngan? Not sure if I can get behind that, really.

(I'd also have possibly ranked Mr. Bones higher, except that until I visited that link down there I'd had no idea that he was black. Beneath the skin, we're all...and so forth, I guess.)

Oh, the ranking is by name recognition? Got me, there. I thought it was some kind of coolness-type-factor, where the guy who's main gig is fighting children beats the one who's gig is killing babies.

Besides, he's best know for fighting the Super Friends 'No Punching Allowed' version of Aquaman. That's negative points, right there..

(Damn, but DC has a serious lack of black supervillians, don't they?)

And, as far as I can think of, only ONE black female villain.

And SHE just LOOKS black; she's an alien.

As I recall, Manta wasn't actually trying to "form a more equitable society underwater". He just wanted to take over and be the big boss. He did mostly employ blacks, and here's his explanation why, in his own words:

"Not that racism is my motive--there's no profit in prejudice--but blacks, having been oppressed on the surface for so long, fight well for the chance to be masters below!"

With that costume (pictured above), I think we might know who already is the master below.

Meahwhile, over at Marvel, the White Tiger is black. And his nickname, in civies, is "Casper."

I'll say this, though, there will never be a more fomidable HeroClick than Black Manta. I never lose when i take that silly sumbitch.

Is there some new White Tiger at Marvel? The one I knew in the 70s was a Hispanic.