If you have ever enjoyed any of my "Week" posts (like the Green Arrow vs. The Pirates Week that precedes this post), you may have assumed that the number of posts in a "Week" is arbitrary, or simply chosen to match a seven-day sequence.

It's not.  It happens to coincide neatly with that, yes, and that is very convenient for me.  But, in fact, the underlying reason is how Golden Age stories (and often ones from later eras) tend to be structured: in seven parts.

That's the template for many a comic book tale.

We number the Splash Page as "0" because it's technically not part of the story.

Remember, during the Golden Age, a comic book usually contained more than one story, sometimes many.  So the cover couldn't necessary be used to convey the information about any one particularly story within.  The cover was therefore often a generic representation of the contents of any one story:

Thus each story has its own individual inside cover: the splash page. The splash page is 'the cover of the DVD'. it tells you:

who the protagonist is (LOGO!), 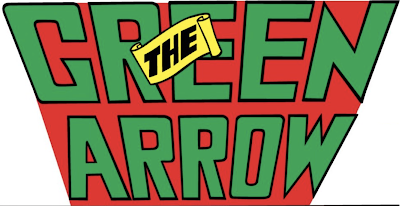 what villain or challenger he will face (The Black Raider pirate ship!), 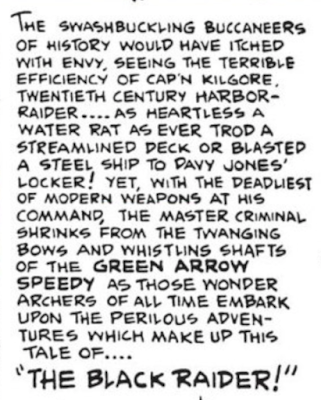 and shows you a literal or metaphorical drawing an example of the conflict between the two.

The protagonist (hero) and antagonist (villain or situation) are introduced separately. They are doing their Own Things; but they are usually aware of each other.


The villain is doing crimes, and in the process we learn his Methods and Motives.  For example, "This is Pirate Captain. He steals at sea using an old-style ship"

or "I was a penny-ante crook but now PENNIES WILL BE MY CRIME SYMBOL." 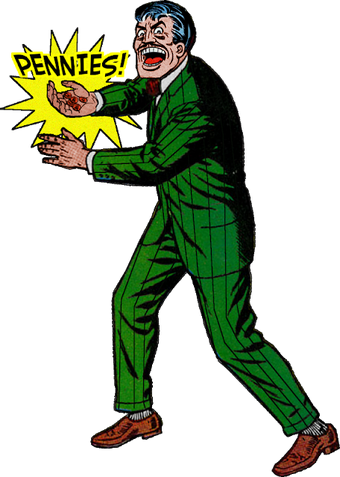 If he is a villain we already know, we learn 'his new angle'. For example, the Joker is bored; something innocuous inspires him; "I shall commit crimes... IN REVERSE!"

This is common in Golden Age Batman stories. It's how they kept Batman's rogue's gallery both fresh but consistent.  This is in contrast, to say, Dick Tracy storylines, where the villain gets one schtick, one story, and then dies.  Badly. Like the one who got eaten by rats.

During the Prep for the first encounter the villain is probably not planning on an encounter with the hero and is, ideally, currently avoiding it. This, of course, may not be true of a returning foe, such as the Golden Age's greatest villain and ultimate evil clown,

During the Prep for First Encounter, the hero, meanwhile, is doing one of two things;

chilling in their private life

The earlier a story is, the more likely the hero is chilling.  Golden Age heroes hung around in sportcoats and smoking jackets a lot.

Learning about the villain's crimes in the news,

hearing about them from Mr. Authority Figure,

or getting wind of something through Society Connections or a Personal Experience.

This is because in the Golden Age, heroes were less likely to be portrayed like policemen who go on patrol.  They were usually portrayed more like fireman; they trained to assist when an unusual "crime fire" broke out.  This is why the Golden Age Justice Society hang out around their big round table having milk and cookies, but the Bronze Age Justice League has members with godlike powers sitting in a satellite on monitor duty.

Because of his close relationship with the police, Batman was on the cutting edge of the idea that a hero would "patrol" his city.

This why his stories often open with him stopping some crime unrelated to the main villain; so often, that this trope is named "The Batman Cold Open."

In any case, either the hero makes the decision to tackle the villain / investigate the situation

or circumstances throw them together,

which brings us to the next stage.

The hero deals with the encounter per usual, but 'per usual' doesn't work. because of this villain's methods or motives.

The hero is caught unawares and the villain gets away (with or without accomplishing his goal; that doesn't really matter).  This is the end of Act 1.


3.  Prep for the Second Encounter(s)

During stage 3, we separately see both the hero and villain take stock of the situation again after their first encounter:

"Two-face let the hostages go?"
"The Joker had the flowers rigged!"
"The Catwoman was there in disguise all along!"
"It seems our thief has pennies, on the brain, eh?"

Armed with this new knowledge, the heroes feel better prepared for the next encounter, sometimes preparing countermeasures; "next time we'll be on the lookout for that, with our bat-copper-alloy-repellant!"

Or sometimes they set up a lure for the villain so they can control the time and place of the second encounter:

"We'll place a fake story in the newspaper about the Van Landorpf emerald that Penguin can't resist!"


The villain does the same. "oh-ho! Batman's on my trail, is he? Well, wait till he see what I have in store for him!" 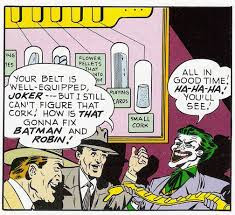 In the Second Encounter,  the hero and/or villain employ countermeasures developed as a result of the First Encounter.

Depending on how many pages the creators have to fill, there may be more than one 'second encounter'.  The second encounter can be dragged out easily because it's the battle of wits between the hero and the villain, just as long as the outcome is slightly different each time.


This is how the hero winds up in a death trap which the villain doesn't stick around to monitor.  The villain's real goals (loot, revenge, etc.) are elsewhere. Killing the hero was never the goal; the hero is just an impediment to the villains' real goals.

In Act 3, the action is accelerated. Sometimes there is no prep and the hero's countermeasures finally work; or the villain does not prep because they don't expect the hero to escape capture, and a result, the villain is defeated. 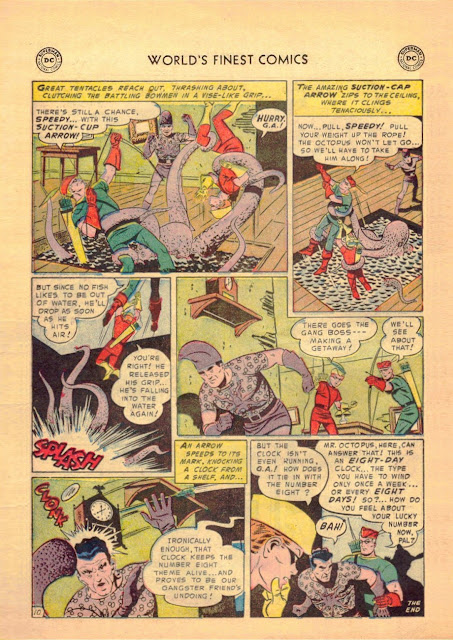 
Often in some ironic way.

This brief ending is the bookend to the Splash page, and accomplishes the return to normal status.  We see the hero pondering whether the villain is dead.  Or we see the villain going to or in jail.

Or the heroes discuss the outcome with Mr. Authority Figure, or among themselves back in the domestic setting.

And those are the seven sections of a regular Golden Age story (and many that follow in later ages):

Green Arrow vs. The Pirates, #6: The Armoire of Trophies!

When last we left Green Error, part-time vigilante and houseplant, he was waiting for his sidekick, Flapjack, to rescue him.


On such occasions, the Boy Back-Up loves to find little ways of rubbing it in that Ollie is too dumb to notice.  Like calling Ollie "chum" after the pirates threw him off the boat as fish food. Twice.

Ollie's captors having been subdued, the Hydrodynamic Duo quickly catch up with the pirates, who have already beaten the snot of everyone on whatever vessel they are robbing.

Ollie brings oceans of love for the boys.

Ollie threatens to shoot people with arrows while, well, actually shooting them with arrows.

And a man with a beard shoots Ollie dead. Thus di--


The pirates skedaddle to their own scow, but not without a parting gift for today's contestants: a brand-new torpedo with Pouty Pegboy attached!

Ollie, following his natural instincts as an arrow, launches himself directly TOWARD the torpedo.


Which, thanks to thousands of hours of salmon laddering, Ollie simply catches and bends the solid steel rudders of.

Flapjack is bit taken a back by meeting someone even more helpless than Ollie.

... KILLS ALL THE PIRATES IN A FIERY and/or WATERY DOOM!

Thus dies... Captain Kilgore and the crew of the Black Raider. Golden Age is hardcore, baby.

And so, having triumphed again through dumb luck, brute strength, and his competent sidekick, Green Arrow adds another memento to his cavernous Armoire of Trophies:

Green Arrow vs. The Pirates, #5: The Green Error!

Ugh. Naturally, Ollie arrows his way out of the situation, because while he may not be very bright, all that time on the salmon ladder is still good for something.

At this point, the pirates are peeved at Ollie repeatedly clouseauing himself back at them, and propose to simply shoot the quivered cockroach in the back.

But Captain Kilgore proves himself a worthy Green Arrow foe by making a perfectly stupid decision for a perfectly nonsensical reason.

Okay, it IS hard to argue with "anyone stupid and overconfident enough to do what Green Arrow does HAS to be insanely rich".  But who do you send the ransom note TO?  The Mayor of Star City? Which one...?

Who on earth would want to ransom Ollie? The kid who launched him into danger with a catapult and who stands to inherit his fortune (including the awesome Arrowcraft)?

In any case, the pirates don't want to waste any more cement or bullets on Ollie, because they need to conserve that stuff for actual THREATS.  So, the villains leave him on a boat with two guards while they go on on their un-postponable heist. Because villains gotta villain.

Pirate Candystriper is stuck sitting on a boat staring at Ollie make like an artificial tree for your at-home office...

and tries to make sure he doesn't get anti-hazard pay for babysitting Star City's least threatening vigilante:

Since Ollie is helpless -- more helpless -- without a bow and arrow, he looks around him and fashions a rudimentary lathe with which to tool one.

All this is just to activate his real weapon: Flapjack, The Boy Back-Up.

Flapjack, ever eager for ADVENTURE, sees the flaming arrow signal and is overjoyed that he finally gets to see what sort of mess Ollie has blundered himself into this time...