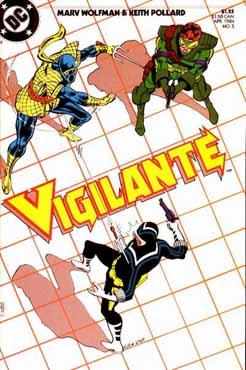 DC does have an excess of characters, so Devon of Seven Hells and I have been "donating" some to Marvel. Devon's latest donation was of Vigilante II, III, and IV (even though IV's not appeared yet!).

But DC does NOT have an excess of gay characters, so, believe me, I'm not strongly motivated to lose any of the ones it has. Yet, as a DC fan, I am made of stern moral stuff, so justice must be done. And so, it is with a semi-heavy heart that I now donate two characters who first appeared as Vigilante (II) villains: Cannon & Sabre.

They were gay; that's okay. They were villains; that's okay, too. They were lovers; that's really okay, because gay characters often aren't allowed to have relationships for fear that what readers will accept in the abstract they will reject when it becomes concrete. Okay, Marv; props for all that, then.

But that's as far as the good goes.

Cannon & Sabre use unnatural Wolfmanese to hit you over the head with their relationship. For example .... "m'love". Now, I know a good many gay people. Enough to fill several football stadiums (I mean, not that we'd ever GO to one, of course!). Yet I have NEVER heard a single ONE call ANYONE "m'love" under ANY circumstances ... even in jest. Then again, I don't know any straight people who talk like the straight characters in a Wolfman book either.

Cannon & Sabre have classically stupid codenames. Marvel characters are usually named after some noun that relates to their power, or a pun, or a "cute" pairing with another character. Cloak & Dagger are the classic example. What actually happens is that a writer needs some characters, grabs a random phrase out of their mental dictionary and conjures up someone to go with the words in the phrase. It's like City of Heroes meets Madlibs. "Meet FOLD, who can manipulate matter and space, SPINDLE, who fires gale-force spikes, and MUTILATE, the man-crushing giant!"

Cannon & Sabre. have the WRONG stupid codenames. Cannon is an expert with sharp pointy stuff. Sabre is a munitions expert. Hardy har har, Marv; what witty comic book irony! I bet that SLAYED them at the Wizard offices! Pass the wretching bucket, please...

Cannon, Sabre, m'love; you gotta go, guys. Besides .... those outfits! I mean, eek. Cannon (obviously the domestic one) wears a full-body oven mitt and brandishes one of the prongs for testing whether your cake is done. Sabre (the butch one, I guess) apparently wears pirate boots while playing paintball. Girls, please, go shopping ... in the Marvel Universe.

Oh, and if Northstar's alive nowadays, give him my regards!

Seems to me there are quite a few assassins in the DCverse...

I'll consider those nominations for Deadbolt, Deadshot, Bolt, and Deathstroke, all of whom would work better in the Marvel Universe.

Deadshot and Deathstroke both work for being "world's best" types--marksman and assassin, respectively. DC is brimming with superlative types like that. It's just a variation on that theme.

He wouldn't be alone, Devon ... he'd have lots of company at Marvel!

Good point, Derek, and not a bad rationale for sparing them both.

I love this series. Hah!

So, I have to ask...are you gonna follow it up with the logical sequel--Marvel characters that you'd trade to DC?

I nominate Man-Thing. Nobody's done anything decent with him since Claremont (god, that was 30 years ago), and even those books were more about the supporting cast than Manny himself. A decent Vertigo or DC universe writer could make Man-Thing interesting, spooky, AND different than Swamp Thing.

Actually, John, that was the original idea. We were going to have a volley on donations each way.

But 10 minutes later, we realized that there really weren't ANY Marvel characters we wanted to cross over.

Except, you know, Dazzler.

Good to see some love for Cannon and Sabre, even if said love comes in the form of two well-deserved one-way tickets outta town.

They will always have a warm place in my ... um, heart, because of one scene, which seared itself into my memory, back in my innocent, tow-headed youth.

The reader finds C and S relaxing in their swank beachfront Malibu dreamhouse, tiny white towels wrapped around their slim, sinewy waists, sipping champagne. Cannon .. er, Sabre .. the one with the Moe haircut (a flaming 'mo haircut, in fact) is giving the other a vigorous rubdown, while they discuss their next assignment.

The scene ends with Moe casting a louche lingering look at his partner's (off-panel) tuchus, while bringing the champagne bottle into frame.....

I was, as they say, agog. Not aghast, mind you. But certainly agog.

Deathstroke can stay for his recent (in the toons *and* the comics) tendency to flirt with the daddy role for Dick Grayson. That shit ain't right, in a glorious sort of way.

See? This is a stupid idea for most of this...

Deathstroke would be so redundent at Marvel.

Vigilante II wuld be even more so. He's Punisher lite for crying out loud!

It would be a violation of the Man-Thing concept if the focus was not on the so-caled supporting cast.

Remember that Manny is not a character; he's a mcguffin.

Okay, I realize I totally missed the boat on this discusssion, but maybe someone'll read it. Cannon and Sabre could TOTALLY have new life in a "Ma Hunkle/JSA" way if they use them right. Now working as nannies for gender reassigned super-baby day care (Cerdia/Cerdian, Lian, Speedy's HIV infected love child), Mraschall and Henry "Hank, now married and working for the law as bounty hunters in their spare time take on a recently converted to good Rose Wilson as an adopted teen. She rejects her fathers influeance and changes her name from Ravager to Redeemer. It could totally work.