The Human Flying Fish Speaks Out! 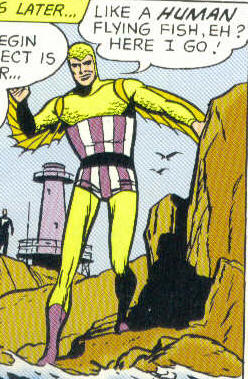 There is no justice in this world!

I, Vic Bragg, am the Human Flying Fish, bravest criminal of ALL TIME. Once you have seen me, my image is burned upon the back of your retina for all time; close your eyes, for I am there!

Why am I not in Villains United?! Ragdoll? Crime Doctor? The friggin' CATMAN? What about ME?!

Before there was Dr. Geist, there was Dr. Krill. When Dr. Krill, your average criminal mastermind / marine biologist / surgeon, needed a human guinea pig for his bizarre experiments to twist the human form by installing gills into lungs, what did I say?

Now, THAT'S bravery, folks. I had to recovery for several months after my surgeries (Doc performed those on a hijacked "Hospital Ship"; oh, they're all over the ocean, really). Was I scared? No.

Was I scared to don a golden yellow wetsuit with water wings and look like Esther Williams brain-damaged offspring? No.

Okay, one does put on some weight after several months of bedrest, and I was afraid of looking fat in front of the fans, so I had Paul Gambi whip me up this snazzy bodice with slimming purple and white stripes and a snug little black cinch; stylin'! 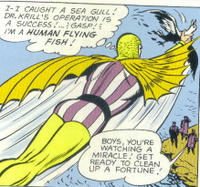 So with only some risky experimental and unnecessary surgery on my lungs, a few months of bed rest, and a willingness to dress like Batman's astonishingly flamboyent cousin, NOW look at what I can do. I can catch seagulls, man. Do have any idea what the black market for seagulls is? I'm telling you, that Doc Krill's a friggin' genius! He's right, we were ready to clean up a fortune!

I started by scoring this discarded beachball that had floated out to sea. I wanted to sell it on E-bay but Doc said, naw, we'll ransom it back to the kid's family. Doc's a smart one! He's a mind-reader, too, as you can see. As you can see from the panel, Doc can hear my thoughts! I think I love him. 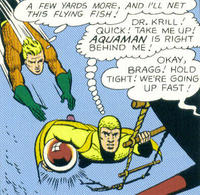 Well, I would have gotten away with it -- except for that dork, Aquaman. Who wears gloves to go swimming? Dang it all; do you know how hard it is to find an undamaged, lost beachball? Aquaman can ruin anything; the Superfriends, the Atlantic Ocean, even the Detroit League; loser.

Then he caught me when I was trying to steal an empty box. Ever notice there are no Container Stores at beach towns? There aren't. Doc coulda found a buyer for that box, and we woulda been living on easy street, with enough money for me to go on wearing gold lame skintight costumes and for Doc to continue performing radical surgeries on my vital systems for the rest of our friggin' lives, man. Doc and I would have been so... happy *sniff*!

Shut up, Aqualad, you big-headed purple-eyed little FREAK! When we get out of prison several decades from now, Doc and I are gonna track down that box and mail it to Aquaman with your severed mishaped dwarf head inside, no matter how many years or stamps it takes! No one mocks the Human Flying Fish ... and lives.
Posted by Scipio at 10:45 PM

I now have a Halloween costume for this year. Thanks, Scipio!

What's interesting is that a later Sub-Mariner villain called Tiger Shark had practically the same origin! Maybe in the Amalgam universe, Aqua-Mariner had an enemy called the Human Tiger Shark!

I just read a reprint of this story in "DC Super Size: Aquaman" (1971)! I did a google search on HFF and found this article. What amazed me is that there are two differences comparing the art reproduced here with the art from the reprint. First, the art here shows HFF's face as much more defined in the scene where he is walking into the water. Makes me wonder if your source used original art. Second, in the reprint I have, when HFF is climbing into the helicopter, he uses a speaking balloon, not a thought balloon. I wonder when these changes took place?