The Square Root of the Calculator = The Atom-Master

The Calculator, brilliant reconceived as an anti-Oracle by some guy named Meltzer (Hi, Brad!), is the breakout character from Identity Crisis. Not only was he a lynchpin of IC, he's one of the six directors of the Secret Society of SuperVillians. Why, with only Batman, Superman, and Green Lantern for company, he even has a Team Ability named after him in Heroclix .

A lot of fans pride themselves on knowing Calculator's wacky 1970s origin. In a memorable series of back-up stories across the DCU, some nut/genius dressed like a giant calculator ran around stealing treasures at the apex of their value, fighting individual JLA members, and "inoculating" himself against defeat aftewards with his "special button". The Calculator had a panel strapped to his chest and a helmet that materialized solid objects by rearranging the atoms of dust molecules in the air. Naturally, he was finally captured by ... you guessed it ... Batman, who turned his own weapon against him (the Calculator returned in the 1980s to battle the Atom, AirWave, and Blue Beetle).

But what most fans haven't noticed is that the original Calculator himself is a redux of a different character: the Atom-Master.

Bob Rozakis may be wacky but he's no fool. Steeped as he is in the history and traditions of DC, when pressed to create a new villian, Bob can reach into h 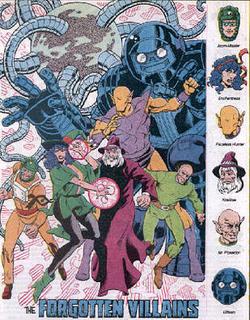 is big bag of forgotten villains, dust one off, give it a new coat of paint, and voila, a sensational character find! This time he did just that, by reviving of one ... the Forgotten Villains.

Can't name 'em, can ya? They were six painfully obscure villains who banded together, at least from their perspective, to conquer the universe. But from the DC editorial perspective, their function was to give the Forgotten Heroes someone to fight. None of the other Forgotten Villains matters (there was one named "Enchantress"; I wondered what ever happened to her...?) to us here, but the Atom-Master...!

The Atom-Master had a panel strapped to his chest and wore a helmet that materialized solid objects by rearranging the atoms of the dust molecules in the air. Sound familiar? Yep--

Just another example of why DC is cool, folks.
Posted by Scipio at 8:24 AM

Scipio, have you ever thought of doing a Q&A type post every once ina while? People could ask questions abvout the DCU and you could answer with your voluminous DC knowledge. I think that would be nifty.

You know I just read the first Atom Master story for the thirtieth time about five days ago.

So I knew about him before you talked about him. so nyeh!

and he fought both Superman and Batman at once.

He did indeed; I'd love to see that story!

God what a f-ed up family the Masters are. Ocean, Atom, and Weapons were all rotten eggs.

Until Atom Master's reappearance in DCCP I suspected that he was the Calculator using a different identity! I still have that theory at Marvel Comics, regarding a one-shot Iron Man villain called the Phantom (his story can be seen in Iron Man Masterworks Vol. 2) and a later David Michelinie creation, the Ghost!

Some concepts are just inevitable.

A hero who runs fast.

Cat-themed guy in a cape.

Evil genius with a mechanical panel ostenatiously strapped to his chest and helmet that materializes solid objects by rearranging the atoms from dust molecules in the air...

Dude, Faceless Hunter from Saturn deserves a tribute from you.