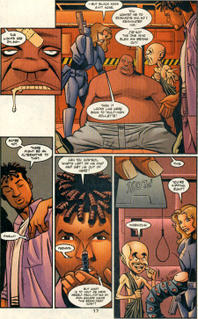 I don't mind bad crossover events. These things happen. After all, we can just forget them if we want and hypertime lets us do so guilt-free.

Except when we can't. Which is almost always.

Yes, for every awful multiseries event that we hate and want to forget there is always at least one giant conceptual crack baby, some DCU state of affairs that is inextricably tied to the Stupid Crossover Event (SCE). You can't ignore the horror of the SCE because you've inherited its child as part of the DCU. This is most annoying.

Pictured is my particular bete noir of these Crossover Crack Babies: Slabslide Penitentiary.

As most DC readers know, Slabside (a.k.a. "The Slab") is in Antarctica (near the magnetic South Pole, in fact). This may sound fun and make for some stark drawings but it is SHEER LUNACY.

The inaccessibility and inhospitability of the Antarctican coast, let alone its mountainous interior, is nearly inconceivable for the average person. I can believe a man can fly. I can believe in shape-shifting mind-reading superheroes from what we know to be a barren planet. I can even believe that Snapper Carr's presence never resulted in Batman abandoning his commitment not to kill. But I cannot accept the idea that a high-tech, maximum security prison could be safely plopped down to operate in the middle of a continent that most microbes can't endure.

Where does such insanity come from? Fittingly enough, the Joker. Slabslide was originally located, oh, somewhere else, until it accidently got relocated to Antarctica courtesy of Little Mister Miracle Shilo Norman, Mult-Man (!), Mr. Mind (!!), the re-animated corpse of Black Mass (don't ask), and some redhead still wearing stormtrooper drag from the SD Comicon (see pic above).

Why is the Joker to blame? It took place in issue 6 of Joker's Last Laugh, a crossover everyone wants to forget.

Except now we can't because one of the DCU's most famous prisons is now in the middle of friggin' Antarctica.