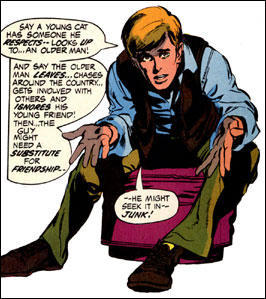 You could go to school or get a job or be a superhero on your own two feet or at least friggin' sit up straight as if you had a backbone!

I'm sick of the Arrow Family ("the Green Team"). Sick of their whiny excuse-making and self-righteous finger-pointing. Sick of their lecturing others while littering the globe with their illegitimate children. Sick of their cheating on their girlfriends, being prostitutes and junkies, trying to be "cool" instead of effective, being victims of modern socially relevant problems, fighting non-deadly crimes with deadly weapons, their eighth-rate "rogues", their prissy facial hair, their greed, their gullibility, their self-centeredness. They are the embodiment of all that has gone wrong with our culture in the last century, both inside and outside of comic books.

I have no problem with the Arrow Family.

However, I DO have a problem with how Winick writes them.

So, I guess, in a sense, I DO have a problem with the Arrow Family.

Sorry for being wrong before...hehe.

Is lil' Speedy's dialoge there a drug confession or a "I am cheating on you and by the breaking up with you" speech?
-nico

Bring back the Connor Hawke/Eddie Fyers Green Arrow. I'd buy it. Although I'm honestly surprised they haven't killed Connor off yet. Maybe they'll have him and Kyle Raynor die saving the universe from meanness or something. DC SPIN, Grab It!

I'll tell you what a truly groundbreaking, cutting-edge, tell-it-like-it-is shockmeister DC writer ought to do.

Think about it. The event of the year.

In Connor's defense, it's really really hard to sit up straight on those stupid ottoman stools. The least Oliver could have done was spring for some lousy Eames chairs--I mean, it was the '60s, so they were still reasonably affordable, for crying out loud.

I am currently AMAZED by two things.

Although I agree. Completely

How was Green Arrow ever in the Justice League? No one really thought that through...

I've now officially appointed today as "Rant at Green Arrow day" - should take the stress out of living in London today! Hope I’ll be able to get to the comic shop at some point...

Oh and the answer to how Green Arrow got into the League? The alternative was Adam Strange...

You know, there's nothing wrong with the Arrow family that a little group counseling couldn't cure.

That, and better writing.

If Erika Christensen plays Green Arrow in a movie, I will buy ten tickets.

You can't blame Ollie for the fact that Denny O'Neil didn't (and I would venture doesn't) know squat about 1) black people and 2) heroin. It might be my archery fetish talking, but I think the arrow dynasty are a fun bunch.

Although cheating on Dinah has to be the stupidest move EVER POSSIBLY MADE.

Then resurrect Blue Beetle, and then kill him off again, just for the hell of it.

Man, that would hilarious.

I personally have no poblem with Ollie or Roy, in fact I kinda of like their hogdog style. But it's the fact that Connor is getting almost 0-face time in the comics that's getting to me. I mean I think that there is only like two small clips of him in Birds of Prey #86, in past year. It's like he's been swept out of the DC universe and no one has told the public yet.

I am super late to this party, but I am very disappointed that Scipio could pass up a straight line like:

A homoerotic haiku, sitting there in plain sight, and all Scipio can do is pick on the arrow family?