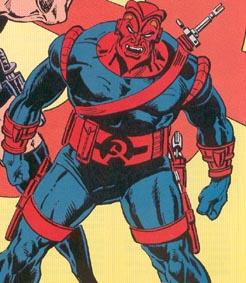 Where the KGBeast goes, can the NKVDemon be far behind?

As recently pointed out at Seven Hells, the KGBeast, with his S&M attire, pun-based name, Cold War ideology, and extreme behavior would blend in better at Marvel than at DC. So, too, his protege, the NKVDemon, who, like Captain America, was a serumized super-soldier.

The original (Gregor Dosynski) was shot and blown up, and succeeded by not ONE but TWO copycats taking his (idiotic) codename.

The best part of what DC tried to make us swallow about this guy was that he was a "master of disguise". What did he disguise himself as ... a truck?

Can't you picture the thought-balloon? "Foolish Americans, never vill they guess beneath this facade of innocent Catholic schoolgirl lurks ... NKVDemon!"

The NKVDemon needs to be fighting Captain America, not Batman!
Posted by Scipio at 8:22 AM

Great series of posts- it’s definitely got me thinking!

I think the NKVDemon (what a name) made a recent appearance as one of the bodyguards who went to the initial meeting in War Games which all went so so wrong (the meet, not the crossover, which was brilliant!)

I have a suggested present for Marvel, but don’t have any comics at work and the Internet is not proving immediately helpful to research it:

“Gunhawk” – he appeared in various Batman comics in the mid-nineties (definitely a period to plunder for throwaway characters).

Also, there must be some characters from the “Bloodlines” crossover we can give them.

By "some", I think he means "everybody but Hitman".

BTW, the NKVDemon is awesome for one reason.... he either gave his mask a goatee, or his mask is SO formfitting and his goatee SO waxed into place that the mask has taken its form.

"Nyet... I will not shave my goatee to blend in with stupid Americans... I am the NKVDemon, and my goatee is my trademark! In fact, I am going to incorporate my beautiful goatee into my mask design!"

"Catherine, students here are St. Ignatius are not permitted to wear goatees!"

First off, I enjoy this blog, which I stumbled upon while hitting the "Next blog" feature.

Second, although DC did indeed get it's start with the glamourized crime of the 30s, it has had to deal with the political upheveal of the 30s, (the Great Depression and the lure of Communism) the 40s, and the start of the Cold War and the McCarthy era in the 50s. As such, they should be able to do political intrigue as well as Marvel, based upon their history.

This one is a good call. Never heard of the guy, but seems very Marvel.