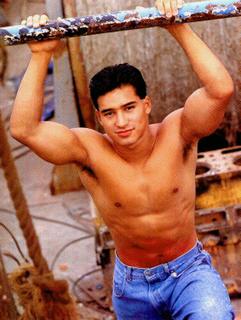 I guess starpower counts for something!

Unremittant moron (but undeniable beefcake) Mario Lopez (host of the "Pet Star", which is part of Animal Planet's outpatient arrangement with the Home for Formerly Famous Actors) is the winner of the "Who Gets to Play Vibe in 'Vibe the Movie'"?

Now, I'm going to pretend I'm not upset that you chose to play the godlike Vibe a man as stupid as Mario. A man so stupid that he repeatedly asks contestants holding dachshunds "What kind of dog is that?"

It's a dachshund, you friggin' moron, the sixth most common breed in America with an unmistakably unique and famously amusing profile. What does it look like, a sheepdog? Then, each time, he mispronounces it afterwards.

Mario's stupidity is IMMUNE to remediation; even though he hosts what is essentially a dog show on Animal Planet, he always seems like he just walked off the set of Saved By The Bell. Even Tiffany-Amber Gleeson knows what a dachshund is, you stupid slab of beef, and if you weren't so focused on covering up the fact that you're a HUGE QUEEN, you could remember it, too! RAHRR!!

On to the rest of the cast! I need help choosing a female actor to play Gypsy.

Any suggestions?
Posted by Scipio at 8:47 AM