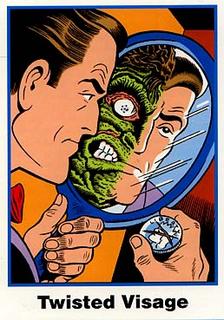 The heart of what makes many characters interesting is some kind of inherent contradiction.

Batman. Upholder of the law or self-appointed vigilante? Brilliant psychological warrior or maladjusted control freak? Loner or general? A comfort or a terror? Ninja, detective, or superhero?

Superman. Naive farmboy or worldly reporter? The American Way or visitor from a distant planet? Regular guy blessed with extraordinary abilities or extraordinary being pretending it's a regular guy? Meek and mild-mannered or the guy with the angry red eyes?

Wonder Woman. Ambassador of peace or butt-kicking warrior woman? Loving and supportive nurturer or preachy arbiter of unrealistic standards of living? Ideal feminist or feminine ideal? The woman every man wants or the woman every man's afraid of?

The Joker. Comedian or killer? Force of chaotic nature or just another scarred nutjob? Comic relief or the most terrifying serial killer ever conceived? Brilliant and eccentric criminal egotist or pathetic demon-driven madman?

Lex Luthor. The avatar of human ambition or symbol of human pettiness? Defender of the common man or enemy of society? Superboy's friend or Superman's enemy?


But I could go on like this all day. If you'll think about your own favorite characters, you'll probably discover that there's some sort of inherent contradiction built in to them, and, therefore, an inherent tension. Instinctively, we view the "sides" of their personalities as unreconcilible (even when intellectually we know better!). We tune in to the adventures of such characters not only to watch them come into conflict with each other but to watch them come into conflict with themselves. That way, they are interesting in themselves, not merely as stock figures in a literary Heroclix game of Good Guys versus Bad Guys. It also makes them adaptable to changing times and circumstances; the history of the characters is the course of their vacillations between their various "sides".

Conversely, if you think about what some characters are missing and why they aren't as interesting as you'd like them to be, you'll probably find that no one's explored their inherent contradictions much. The current Flash is an example for me. To me, Wally West is just ... Wally West. If they worked the "blue collar by day, iconic superhero by night" routine a bit more, I might be more interested. What Johns failed to accomplish for me on the Flash he is succeeding with on Green Lantern. Hal Jordan is an obedient soldier and a rebel, a noble hero and a conceited jackass, an unimaginative dullard and a master tactitian, one of the superhero community's most and least respected members. In short, he's what you get if you roll John Stewart, Guy Gardner, and Kyle Rayner into one.

I'd probably point out Flash as being either a legacy hero made good or his own man. Life in the fast lane or wanting to settle down with Linda.

Sounds a lot like the "Duel Identities" storyline that Waid and Hitch did in JLA a while ago, where the heroes all - except for WW and Aquaman - end up split into their secret identities and their heroic personas, with neither of each doing well; without their contradictions, they collapse...

Interesting that only Catwoman and Wonder Woman have the sexual interest angle in them. You could make the argument for Bruce Wayne being the perfect hot boyfriend or an asexual psycho.

Oh, there's definite sexual angles to the male heroes, but the majority of comic reader aren't much focused on that so I didn't go there.

And, of course, Hal Jordan; superpowerless except from the waist down!

The recent revival of the Carter Hall Hawkman played up his contradictions nicely. A savage brutal warrior with the funny bird-hat on, a charming and refined academic when he put a shirt on.

I don't remember Katar Hol having a major internal contradiction, though I'm sure one was retrofitted in there someplace.

The Denny O'Neil/Denys Cowan version of The Question had a powerful internal conflict between the man Vic Sage used to be and the man he was trying to become.

But the most powerful internal struggle in the DC universe could be found in the heart of the greatest Green Lantern of all: G'nort.

"Do I pee on the hydrant or on the lamppost?"

My dachshund, wise beyond his dog-years, has solved G'nort's dilemma: both.

But those are external contradictions, and thus much less interesting. Visually, Hawkman's always been cool. It's only been in the last few years the character himself has been at all interesting.

Though you don't like to talk about Marvel here, the early days of Spider-Man had one of the great superhero contradictions: the quiet uber-geek and nice boy who becomes a wildman showboat once he dons the tights. Snazzy.

Your dog is indeed wise. My best bud has a basset hound of considerably lesser wisdom. His latest discovery: that sunflowers are terrifying. Yes, you can scare the dog with a sunflower. Ye gods.

That's what made Morrison's run on Animal Man so good; it was full of those dichotomies. Tights-wearing Justice Leaguer, or confused family man? Defender of nature's laws or man's laws? Subject to animal desire or rational upbringing? Potentially one of the most powerful superhumans, or just a guy with "animal powers"?

Then the other writers destroyed his series, and AM the character, by thinking is was all about The Weird and trying to "top" Morrison. Too bad.