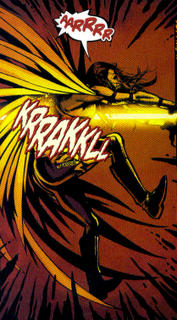 So, um, I'm guessing from this pic from the upcoming Infinite Crisis that Black Condor II won't be part of the new DCU (looks like he's being sent to KFC).

Oh, dear. Now who will protect us from rabid raccoons, then suffer a crisis of conscience about it? 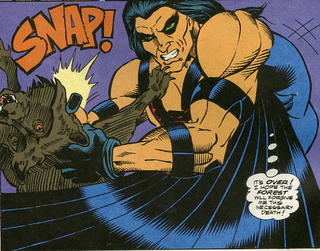 Although he's a hottie, Black Condor II (does he even have a name?) has always been a unrelenting sourpuss. Dude, you can fly; enjoy it!

But no, during the Dark Age, DC needed to give us a grim & gritty version of one of the Golden Age's most fabulous characters (and I do mean fabulous!)

Hey, I want my comics to be serious, trust me. What's going on now in DC right now delights me enormously. But if we need deadly seriousness in our core characters, let's leaven it with some bright and shiny in our lesser characters, shall we?

Because we can also rape them and burn their corpses later, you know!
Posted by Scipio at 6:38 AM

Where did that IC panel come from? Are there more?
- Jon Morris

I second the "Where's it from?"

Can "The Black Condor dies" really qualify as a spoiler to anybody, whether it's true or not?

Does anybody have so much emotional investment in him that premature news of his death would upset them?

It's one panel out of four pages of previews in this week's Wizard Magazine.

Oh come on, lots of heroes can take a shot like that. Unless it's said definitely in Wizard that he dies, all we got is he gets hit in battle.

Well, at first, Kris, that's what I thought, too.

But then I notice the shot COMES OUT THE BACK of him...

Hey, Black Condor was easily the 8th-best Starman supporting character, after the likes of the Shade, Ted Knight, David's Ghost, Jake Bennetti, Ralph and Sue Dibny, the O'Dares, and a bunch of other guys!
Actually, Starman made Black Condor pretty cool, I thought.

I thought the second Black Condor was pretty cool in Star City, too. I liked the 'wilderness in the urban jungle' motif.