I was just a wee lad when my family moved here from the Old Country. Back in Bialya, I knew how to feel about my country: bad. But once we were in the U.S. of A., I was in confusion. Should I hate this country, too? 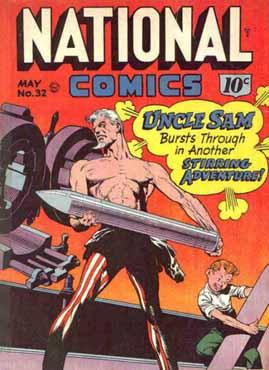 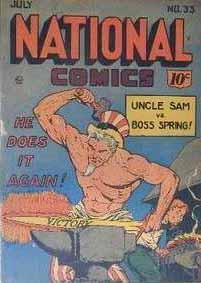 Thank the Founding Fathers, comic books had the answer. Yes, with covers like these, Uncle Sam taught me to love this country with a red hot burning fever.

"He does it again!" Half naked, he hammers out his sword of victory into fiery white-hot straightness! His little Buddy in the background leans over intently, eager to provide whatever Sam needs to bring that victory home. How could such a scene not enflame the soul of any red-blooded youth?

At right, a stripped down Unc is poised to shove his projectile of freedom in that waiting aperture in the arsenal of democracy, as fresh-faced Buddy struggles to handle his own projectile, which is almost more than he knows what to do with *chuckle*!

Bursting through in another stirring adventure, Sam inspired feeling in a young Bialyan refugee like none I'd ever known and I began to love my country with swelling patriotism. If only I could be a Buddy to Uncle Sam!

Here, Uncle Sam can barely keep his hat on and Buddy needs to hang on to keep from being blown off while Sam, with a major piece of ordinance between his legs, joyously rides his way into young patriots' hearts, again bursting through. I tell you, as I grew from a Bialyan boy to an American adolescent, it was inspiring images like this that kept me on the straight and narrow.

If only all comics had been this wholesome. Why, Frederic Wertham would have died in deserved obscurity! There would have been no shameless '60s or selfish '70s if our nation 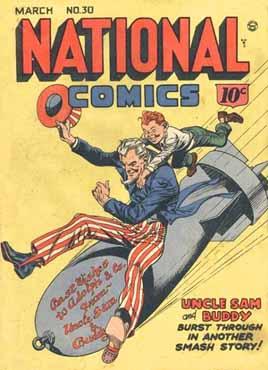 had been filled with men modeling their lives on this sinewy super-patriot and his eager young partner.

We still see Uncle Same, occasionally. Partnered with his friends, the heavily mascara-ed Black Condor, Roy Lincoln the Human Condom, the saucy Phantom Lady, the light on his feet Ray, and that young parcel of personal explosive power, Damage.

I feel strangely yet warmly attracted to America now.

Well, this pretty much confirms your theory that the entire Quality Comics roster was gay...

I don't know a thing about comics, so maybe it's out of context or something, but it seems vaguely homo-erotic.

Some people need to be hit over the head with a hammer.

I too find myself getting confused mixed feelings about the sinewy bare chest of Uncle Sam, coupled a face I associate with being old.

Actually, Kris, in many National comics, Sam is white haired, but drawn to be quite young.

huh, who knew Uncle Sam was such a hottie?
-nico

No, Devon, I'm a flaming patriot!

Scipio, do you still do your Latin blog? if so, where is it?

I stopped doing it because it wasn't getting any hits *sob*...

I must find high-res version of Nation Comics #32 cover and output to huge poster on a plotter!!!

And hang it in the bedroom!
How...inspiring!

I suppose we should enjoy Uncle Sam's rather large missile while we can. (Yeah, I'm a size queen who likes All-American boys, what's it to ya?)

From that IC preview in Wizard, I can't imagine him or the rest of the Freedom Fighters surviving that ambush.

Although I'll be glad to see that whiny brat Damage get offed in some satisfyingly icky way.

They can't kill Uncle Sam. He'd just ... reappear or something.

I'm betting everyone gets out except

the Human Bomb and Black Condor

I don't know about Uncle Sam surviving. It depends on who's narrating the captions. The "He claims a lot" line seemed pretty hostile toward the character on a metatextual level.

And if it truly is the worst day in the DCU, wouldn't it make sense to have an avatar of freedom, and indeed, a group that call themselves the Freedom Fighters, bite it?

They all seem to be perfect candidates for being offed. Not that I agree: I always thought the Freedom Fighters were kind of a fun team...although they don't seem to have a place in the DCU that isn't already being filled by the JSA.

Uncle Sam is a conceptual being, so he probably *can't* be killed.

Then again, DC managed to kill off Kid Eternity, whose entire shtick was bringing people back from death.

It won't work in actual fact, that is exactly what I suppose.
workout shoes | hair wraps | what is social responsibility