*Sigh*. If you don't keep the Gay Bloggers Union happy, things can turn nasty. Last time I defied them, they broke into my house with a hairpin, painted my dog's toenails and rearranged my furniture. I felt so ... violated. 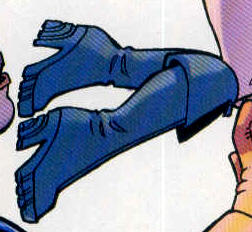 High-heeled pirate boots that accentuate her gorgeous gams but STILL have classic "crimefighting treads". I almost fainted when I saw them. It's like Batman and Zatanna left their footwear together in some closet on the satellite, and these boots sprang from their union.

They state emphatically, "In us are all divisions reconciled. We are the ultimate synthesis of the Crimefighting Footwear Dialectic. We are the Power Boots."

Just as Power Girl fully expresses both her "feminine" and "masculine" attributes in a unified way that highlights them both, so too do the Power Boots. Not since Alan Scott's gladiator-strap golden jellies have we seen so bold, so transcendently meaningful a statement on the masculine/feminine dichotomy in superheroic footwear.

In the final analysis, who really cares where Power Girl comes from?

Okay, I have to give you props. This blog is hilarious.

Thanks, CT! Welcome, and chime in at will!

Truth is, I used to write ad copy for Sketchers...

...her *boots*? I think you mistyped a letter in there.

Pity about the gloves