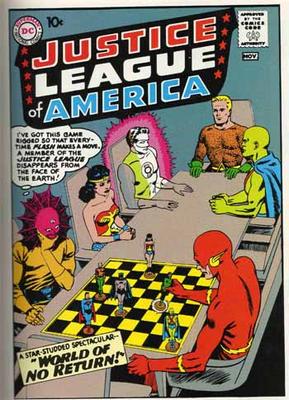 
After all, playing chess against the Justice League IS what Despero does.
Posted by Scipio at 1:55 AM

If you are correct I'll sing your praises for a whole day!

Me too. That would catipult Despero up among the great villains where he belongs. I always thought he was one of DC's scariest bad guys since he got all bulked up.

Hey, that's pretty clever. A lot clever-er than DC giving away the Mockingbird thing with their solicits.

Oh, geez, they did that? I hadn't seen, but I guess that shoots down the theory Scipio just inspired me to have about Despero being Mockingbird, too. Now I'll go back to my Mockingbird=Luthor theory, with the Secret Six being his little way of keeping the Secret Society on its toes.

I don't know who Mockingbird is;
I don't WANT to.

Did the OMAC android things always have the dorsal fin action? because I suddenly realize they bear at least a passing resemblance to dorsal-fin-sporting Despero ....

The dorsal fin is a visual echo of the mohawk hairstyle worn by the original OMAC, created by Jack Kirby.

He was into odd hair and headgear.

OMG, Despero was an actual Justice League member at one point! L-Ron's was somehow downloaded into Despero at some point.

woah, I totally forgot about that. Maybe L-Ron is behind it all!!!

And L-Ron worked for Manga Khan, after all...!

Naw. Gotta be Hector Hammond behind it all!