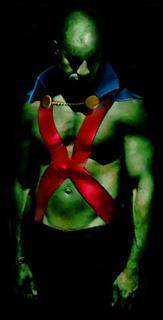 I want Marco Xavier to come back.

Back in the 1960s when guys like Hawkman and Aquaman were cashing in on the secret agent craze, Martian Manhunter got in the act, too (as I was reminded by a faithful Absorbascommenter!).

Believe it or not, from July 1966 to April 1968 (House of Mystery 160 -173), the Martian Manhunter abandoned his "John Jones" identity and adopted the identity of deceased European playboy Marco Xavier. MM himself accidently caused Xavier's death, but that was okay since Xavier was a bad guy anyway (that sort of thing used to happen a lot in the Silver Age, and heroes never lost any sleep about it; when did heroes become so namby-pamby that they'd get their panties in a bundle about a little magical lobotomy, for pity's sake?!).

How bad was Xavier? Why, he was an agent of the evil superspy organization Vulture (eek!), headed by the horrible "Faceless." So, J'onn operated as a counterspy, infilitrating Vulture in order to destroy it. In a twist, Faux Marco was assigned by the organization to be their point man in fighting ... see whether you can guess it ... the Martian Manhunter.

OH, the comic book irony! Comic books love irony; the serial nature of the medium effectively precludes real tragedy or comedy, so the comic books are layered with nearly 70 years of irony instead. This wasn't the first or last time we've seen the "my good guy and bad guy secret IDs are in conflict" routine. Early Plastic Man was at odds with his other identity, Public Enemy Eel O'Brien. A memorable storyline in the Batman Adventures pitted Batman against Matches Malone. I'm sure the Absorbascommenters will chime in with more!

Anyway, the Faux Marco finally apprehended Faceless who turned out to be ... see whether you can guess it ... the Real Marco Xavier (who was not so dead after all)!

What a great schtick for J'onn! C'mon, DC! He could be a black native of Federal City, secretly a white evil spy (maybe for Checkmate, whose name is about as silly as "Vulture"), supersecretly a green superhero! Where DOES he find the time?
Posted by Scipio at 1:35 PM

Oh yeah.. that would be BOSS. I actually have the issue of House of Secrets that introduces this BOLD, NEW DIRECTION for Martian Manhunter... I think I bought it because a) it was old, and I loved reading old comics. Even the ads, man did I ever enjoy those old G.I.Joe ads. and b) Robby Reed became Plastic Man through the use of the H-Dial. Think about it for a second..
Plastic Man is obstensibly walking around somewhere in the DCU at that point, and the H-Dial spits out his costume and powers for Robby Reed to assume. That means that, at any point during Dial H for Hero, it was conceivable that the kid would become Superman.

...if I became Superman, I'd use my Kryptonian super-strength to crush the H-Dial. Then I'd build a castle. Out of solid gold. And I'd wear a crown around all the time. So, it's probably a good thing that it's not likely.

Sadly, I lack Meach's obsessive, burning hatred. I'd probably end up being more of an annoyance.

"Don't look now, but here comes Joel."
"Is he wearing the crown?"
"Of course he's wearing the crown. Just pretend you don't notice."
"God, he is such a tool. Ten bucks says he mentions the castle."
"I mean, it's not even a nice crown... it's got a big diamond-encrusted 'S' on the front, just in case anybody forgets he's got Superman's powers. It's ridiculous."
"I know,he looks like the Burger King."

...it would still rule, though.

Well, the classic Super-hero irony is the woman always loving the hero OR the secret identity, but not both.

Take any number of old Superman stories for examples of not liking the secret identity (Oh Clark, why can't you be more like that Superman, he's a real man.)

I know there are are several examples of the woman loving the man but not the hero. None are coming to mind at the moment except for the time Firestorm was being sued by the woman who was dating Ronald Raymond's dad at the time. Not a classic example, because they weren't the 2 dating at the time, but close enough.

This irony is taken up a level when they have 2 characters date who fight in their secret identities (see Green Lantern/Star Sapphire).

It was pretty cool.

The opposite of the "I love Superman, and that Clark Kent sure is a dork"? Pretty much any supporting cast member in Spider-Man in the 60's. Just ask Gwen Stacy who she loves ... and who murdered her father.


As for the Eel O'Brien/Plastic Man example, all I can think of is that in real life, hapless associate director of the FBI Mark Felt never did catch that dastardly Deep throat.

Am I the only one who thinks early JLA art made J'onn J'onzz look like a black man who'd been colored green?