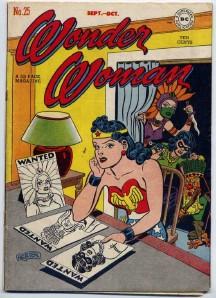 If you aren't reading Wonder Woman, please tell me why not.

I'm not an "automatic fan" of Greg Rucka's writing. I dropped Gotham Central because the whole "police procedural" routine just didn't do it for me.

But Rucka's work on Wonder Woman has me riveted. His characterizations and use of mythological figures is spot on (something that matters to me a lot because I'm a Classicist). He's created an intriguing supporting cast, revitalized her rogue's gallery, and shephered her through a heroic quest that's resulted in strong, positive character development for her, her companions, and her opponents. He's even given her a new "power"!

Her new ability, a greater intelligence in how she sees the world around her, comes from the gift of a portion of Athena's eyesight. This shows substantial erudition on Rucka's part; in Classical literature Athena's frequent epithet "grey-eyed" was symbolic of her ability to see the world more wisely and dispassionately than her fellow gods. Rucka's followed through by having Athena's intelligence and wisdom allow her to take control of a new Information Age Olympus. Now that WW shares Athena's vision, her new eyes are prominently colored grey (DC artists: do not EVER forget this henceforth!) and she perceives much more clearly her immediate surroundings.

A good writer like Rucka doesn't TELL us this, he shows us. John Byrne would have had WW say, "By partaking in a share of the divine vision of my patron and ruler of Olympus, grey-eyed Athena, goddess of wisdom, I now have to ability to perceive the world as it is, not as others might wish it, and other people as they truly are, not as they wish to be perceived! It would seem that, though no longer the goddess of truth, yet I remain its acolyte." *Sigh*.

But Greg Rucka allows Wonder Woman to realize that Cassie needs to be left alone to process her new knowledge about her father; that her associate whose child she brought back from the dead is still uncomfortable with her because she caused the death to begin (a brilliant touch of emotional realism from Rucka); and that the staffer whom we readers thought had a crush on her is actually a Checkmate spy. All of this happens simply, subtly, and immediately.

This subtle power is not only a logical extension of Athena's power, but of Wonder Woman's, almost as if her lasso were now, well, in her eyes. Superman, with his super-vision, sees. Batman, with his deductive powers, observes. Now, Wonder Woman, with her grey eyes, perceives.
Posted by Scipio at 8:09 AM

Completely agree. Rucka's Wonder Woman has been brilliant, and never stronger than in the last six issues or so.

Oh, kick ass. Now I have to start reading this.

If Aquaman becomes a griper, they could collect his stories into a trade paperback called The Whine-Dark Sea.

Thanks! I'll be here all week! Don't forget to tip your servers!

I'd read Wonder Woman more often if they'd put the bloody trades out more frequently. I've only gotten to "Bitter Rivals" so far.

I'd love to pick up a couple of good issues of Wonder Woman but unfortunately I don't like Greg Rucka's writing at all. And as a Classic's Grad myself I don't find the additions you've mentioned particularily interesting, but that's probably just a personal preference as I've always hated the majority of Greek myths, far preferring Latin realpolitik.
It's too bad, I think Wonder Woman has the potential to be a great title and could be one of DC's top sellers, but right now I couldn't give a damn less.

I'm not going to pull out any books to check, but I'm pretty sure it's literally "owl-eyed" (at least in The Odyssey) but that it generally gets translated as "gray-eyed," but maybe the former works better as an epithet for this more-than-human sight. This does seem like a potentially interesting turn and Athena could be a powerful (metaphorical) ally, but I prefer the Greek side in Classics.

Well, it's kind of the other way 'round, Rose!

GLAUKOS means "grey / glowing". The Greek word for "owl", GLAUX, comes from the word GLAUKOS, because an owl's eyes glow in the dark (typical of noctural predators, the tapetum in the back of the eye reflects light back in the eyeball to sharpen night vision).

I think the vision thing is a minor change and a totally meaningless one. As much as I hate to say it I think Wonder Woman should be "grim and grittied" up. That doesn't mean it should become over-the-top violent and hypersexualized, just that the premise behind the character should be taken seriously.
A hero from Classical civilization existing in the modern world is a neat idea. Having that hero be a woman is a clever twist. It's almost impossible to go wrong with this idea if it's played straight but I don't think it ever has.
The WW costume already has the essentials for armour if you think about it: headband to keep hair out of face while fighting, breastplate, armoured belt, greaves, forearm protection. The red top could be perceived as a partly mail-shirt, like Captain America's. If it was drawn a little differently than it is now with these modifications in mind it could work.
An ambassador for peace to the modern world is interesting. Classical civilizations rarely imposed peace by negotiation. A variety of ambassadors or "legates" being sent out from Themyscria to impose world order has tons of story potential.
WW's island home could be a great setting as well if pictured as a city with political upheavel, factional strife, public festivals, cults and ceremonies and such. An entire issue could be used for "new Ancient Greek tragedy" or oratory in public debate. There's a totally cool world built around Wonder Woman but I don't think a single damn writer has ever used it.
If Wonder Woman is granted special insight with these new eyes maybe she should take a look around for a new writer 'cause for right now and always her book sucks.

Diana is still written as an overbearing twit, however.

Boy, that wisdom works great! Too bad it's only on other people.

You are a what? Classicist?