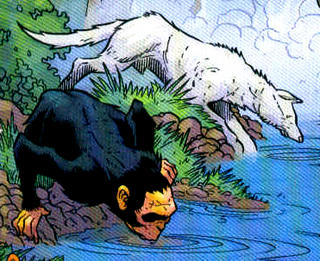 Were you confused by this week's issue of Day of Vengeance, where Detective Chimp says a "doggie friend" led him to the Fountain of Youth?

Don't be; it's Rex the Wonder Dog.

In Jan/Feb 1952, DC debuted The Adventures of Rex the Wonder Dog (that's the cover of issue 1 down below, which is now darned expensive). The next time there's a "when did the Silver Age begin?" debate, end it immediately; according to the people who started the Silver Age, this comic is its beginning.

Rex made Lassie look like a special ed puppy. Rex could ride a horse, brandish a torch, fight dinosaurs,

wrestle octopi, drive a stagcoach, ride dolphins, wear an indian headdress, and, my personal favorite, "smell evil walking." How could this be? Rex had been injected by a super-soldier-serum by an army doctor (who got shot immediately afterwards), thus gaining increased strength, stamina, intelligence, and probably poo that smelled like rose petals. Yes, friends, in the DC Universe, Captain America is a dog.

Like most comic book dogs (and people), Rex was white.

Starting in his fourth issue, Rex had a back-up feature: Bobo the Detective Chimp. The origin (and degree) of Bobo's intelligence has changed over the years (the whole "talking chimp" part is fairly new), but his trip with Rex to the Fountain of Youth has consistently been the explanation for his not aging.

The Adventures of Rex lasted 46 issues, the last in Nov/Dec 1959. That's one issue more than the Will Payton Starman comic, by the way, but you probably don't remember him either. 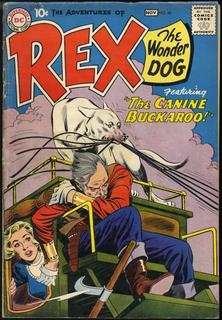 But Rex and Bobo go on, lurking about the corners of the DCU, working on and off for the Bureau of Amplified Animals (which Grant Morrison was counting on your not knowing about when he wrote WE3).

So Rex is out there in the DCU; DC, shine a light on him!

He'd be a pal for Krypto. He'd be a credible (in a comic-book sense) Bat-Hound. Even better, he could be the animal companion of the Atom. That's not as stupid as it sounds, and here's why. Rex's first two owners were a soldier and his kid brother. But his third owner was John Rayburn, a scientist who was able to shrink things (before there was a Ray Palmer, I might add), and with whom he had a number of microscopic adventures. Where would you put a hyper-intelligent dog who's used to adventuring in the microscopic world, other than with the Atom?
Posted by Scipio at 5:19 PM

Good show! Yes, DC should always be looking into the vaults to revitalize old properties. There's gold in them thar pulps!

I first came across Detective Chimp in the DC Encyclopaedia last Christmas Day, and was led to the entry about Rex the Wonder Dog.

If I remember correctly, Rex was hanging out with ill-fated group “The Ravers” of “Superboy and the Ravers” “fame”. I couldn’t believe that DC had chosen to reuse the dog ahead of the Chimp. Until Day of Vengeance.

“Everyone sucks but me” – GENIUS! Someone is making all my dreams come true.

And if the "Ravers" ain't "the corners of the DCU" I don't know what is!

Rex actually showed up in The Flash, fighting Gorilla Grodd.

Along with Bobo and Green Lantern, as I recall...

The DC Universe must be a strange and wonderful place to live. Wonder Dogs, Detective Chimps, Gorilla Cities...

How come Detective Chimp has never worked on a case with Angel & the Ape?

Well, he did work on Gorilla Grodd's divorce case (no...really) and Grodd is Sam Simeon's uncle...