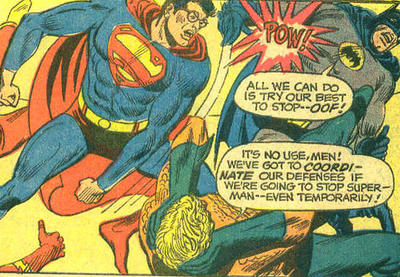 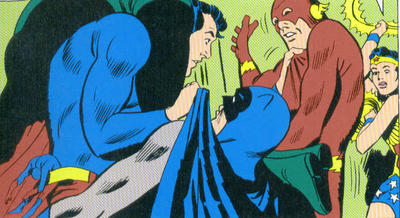 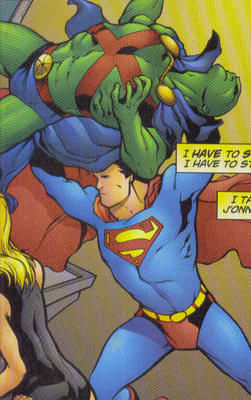 Superman beating the snot out of the rest of the Justice League.

Another fine Tradition of the DCU.
Posted by Scipio at 6:32 AM

If it's not him, it's Batman. Jeebus, one of those two is always pounding on the League.

Next time they decide to have a hero go ape on his teammates, I want the Atom to kick the JLA's asses. At least that'd be different.

Or have Green Arrow flip out and take everyone out.

That would rule. Certainly nobody would see it coming.

"I've taken out Superman with my kryptonite arrow, J'onn with a thermite bomb arrow, Hal with a yellow boxing glove arrow, and Batman with a kick to the nuts! Now to find Aquaman and stomp him with my Old Bay Seasoning arrow!"

Come to think of it, when's the last time Wonder Woman beat the holy poo out of the Justice League? I'd say she's overdue for a SuperFriends Stomping. Diana, go git 'em!

I think Ollie would use a "desiccant arrow" on Arthur...

I'd like to see the Atom pull it off; he's smart enough. And no one would see him coming (well, he'd have to pick Superman off first, of course).

WW kicked the JLA's asses in "A League of One," which in my opinion was a great story and beautifully painted, too.

Is... uh... Is Hal sitting on Superman's right shoulder in that second panel? And if so... why?

Oh... on further perusal, it seems Supes is collecting the JLA. Hal is slung over his shoulder. And he's got Atom tucked into his belt! How cute!

Superman collecting the League for later is...certainly special! What comic is that from, please?

Flash kicked the League's asses in 1979 when they wouldn't bring his wife back from the dead.

and Green Lantern could kill the entire League any time he wants if he's not that little girl chump Kyle Rayner.

Yes, with the power of the ring, Hal *could* conceivably kill off the whole League. He could, in the sense that any given humans has the potential to be a Navy SEAL. But, conditions being what they actually are, the guy on the street's laziness prevents him from making the cut, and Hal's raging stupidity ("me make big hammer with ring") and jackassery ("i sure am important") preclude him from ever being successful at such a thing,

Now Kyle, he has the imagination to pull it off.