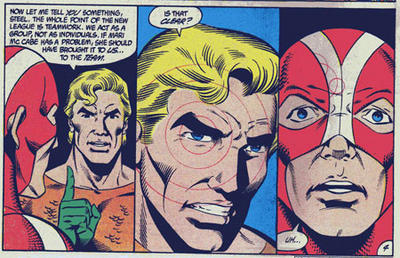 Okay, you've probably noticed that I think Gerry Conway is Satan's Cabana Boy. How can I despise the man who created Vibe, you ask? Does a husband have to like his in-laws?

Anyway, here's some credit where credit is due ... to Gerry Conway.

Conway is the only writer I know of (other than Morrison's one-panel of aquatelepathic attack in the Hyperclan story) who understood that Aquaman's "mental telepathy" would have an affect on anything with a brain, not just fish.

People make fun of Aquaman because he "talks to fish" (well, that and other reasons). But as a general rule, throughout his history Aquaman does NOT talk to fish. He commands them (along with other sea creatures). That's sensible; marine brains aren't wired for language (heck, most simian brains can barely handle it). But they do know all about instinctive imperatives. Must swim. Must hide. Must mate.

Seems pretty clear what Aquaman does is impose his will on the fish and his imperatives take the place of their regular ones. Must disarm harpoonist. Must spell out "S.O.S." with our bodies. Must ram Mantaship.

Unless you go all new-age with some hoo-hah like "the Clear" (a cousin of "the Green" and "the Red"), marine animals brains aren't intrinsically different than land animal brains (except for being, on average, simpler). If Aquaman's mind can command sea creatures it is reasonable to assume it could, to some degree, influence (or "push" as Max Lord used to say) other ones. Even humans (particularly ones with simple brains, like Steel). Apparently Gerry Conway's the only writer smart enough to realize this (I can NOT believe I just wrote that sentence).

It explains a lot, too, particularly how a guy with little social interaction is such a "natural leader". You can laugh at him all you want, but when Aquaman talks, people shut up and listen. Ever seen Batman, or any other JLAer, mouth off to Aquaman? No. He's a freak and foreigner by Atlantean standard, but still they used to bow and scrape before him. The man once made Senator Neptune Perkins wet his pants, for cryin' out loud.

Even Gerry Conway knew that.

You are correct sir! Aquaman is an odd fish --- he could be a big joke, or he could be amazingly powerful. Most writers as far as I can tell haven't decided themselves which they want ol' Arthur to be.

And while they were getting all new-agey mumbo-jumbo-y, why tie it into the concepts of "the Green" and "the Red" and NOT call it "the Blue"? WHY?

Probably because water is naturally "clear" not blue.

But I would have called the blue, too.

Every time I see Gerry Conway's name on Law & Order: Criminal Intent, I smile a little.

I remember reading that issue of JLofA way back when and thinking how cool it was that Aquaman could do that. It boggles the mind that no one ever followed up with this ability.

Remember when he bounced his telepathy off the walls like telepathic sonar?

Okay... just a warning here.. lay off the Steel jokes.

Damn, Arthur was hot back then.

But you understand that Aquaman doesn't COMMAND fish anymore right? Because that would be wrong, to force one's will upon innocent marine life. He ASKS the fish, and they obey out of RESPECT. I swear this is in print. Aquaman in the P.E.T.A. David era.

Way to go, PAD, you cut off his hand AND his balls.

The in-story reason was that imposing his will would activate the ancient dreaded Curse of Kordax and turn Aquaman into a monster. To which I say: JEEBUS, you had the opportunity--in the extreme 90s yet--to make Aquaman a FRICKIN BADASS SCALY SEA MONSTER AND YOU DIDN'T TAKE IT?!!

Never understood people's automatic love of his work (thought I loved Young Justice). Seems to me whenever he writes a character he completely changes it into a different character.

Aquaman is the King of the Sea.

It won't really have effect, I consider like this.
where is Egypt | cock cage | Michigan state parks