Do you live in the town you were born in?

Probably not. Many young adults realize that their hometowns aren't really where they "fit in" and that they need to move elswhere.

Well, some comic book characters are like that, too!

In a recent "post exchange" with Seven Hells, we each talked about a character created in one comic book universe that really seemed as though it should belong elsewhere. Devon suggested that Killer Croc, at least as his character has evolved, really belongs at Marvel (specifically, in Spiderman's rogue's gallery).

As we talked about it more, we realized, GOSH, there are lots of DC characters who seem like they belong better in the Marvel Universe. And since DC has no shortage of usable characters, why not be charitable and give some to the friendly neighborhood competition? One man's garbage is another man's gold, and characters that seem awkwardly out of place in the DCU could be stars in the different milieu of the Marvelverse.

In fact, we're willing to bet there are at least, let's say, 365 "donatable" characters DC could give Marvel. Together, the Absorbascon and Seven Hells are going to figure out which ones they are!

I'll give this venture a big headstart by listing the first 37 (!) DC c 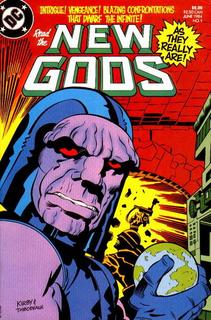 haracters who need to be donated to Marvel:

Yes, the bulk of the Fourth World/Forever People characters feel like they belong in the Marvelverse, for the obvious reason that Jack Kirby created them. Understand, this is not a criticism of these characters; they just need to go where they "fit" better. No matter how many commenters swear allegiance to the 4th Worlders, the fact remains that they stick out like sore thumbs and DC has never successfully been able to integrate them into its "native" mythos.

Barda and Mister Miracle? They actually work in the DCU. Just retcon their backstories a tad (okay-- a lot) and Mister Miracle ("protege of Zatara and Merry Girl of 1000 Gimmicks!") and Barda (renegade Amazon) could take their place in the JSA....

At last, someone's pointing to the elephant in the room!

To the emporer's dangly bits!

Speak it, Scipio! Speak that truth to power!

In previous posts, I've described the Fourth Worlders as DC's crazy aunt in the attic, medicated and trotted out only on special family occasions like Christmas / crossovers.

Is there a canon reason why Darkseid can't conquer Earth, other than the usual (good guys win alla time)? It's been demondtrated many times that Darkseid is far more powerful than Superman. So is there a "Spear of Destiny" at work here explaining why Earth is safe from this omnipotent space tyrant?

He doesn't bother for four reasons:

One, the prize he wanted on the Earth, the "Anti-Life Equation," was lost. Somehow he knew that one person on this planet had the ALE in his brain. Said dude was found and accidentally killed in an issue of Forever People. (He was a businessman/criminal named "Billion-Dollar Bates.)

Two, it's not worth the effort. Earth would resist hard, and New Genesis would pitch in. That'd be too much for his forces to fight.

Three, whenever he tries it, his son Orion stomps the poo out of him.

Four, the writers haven't gotten around to it.

It took me a long time to come around on the Fourth World stuff, but now I dig it big-time. Tremendously weird and a lot of fun. With awful, awful names. "Vermin Vundabar?" Oy.

Haha... my fiance actually just did a painting of Mr Miracle and Barda for his portfolio. He's a comics artist and doing some paintings to show to DC in the nearish future. If you want to see it, and the other paintings he's been doing, check out http://www.opencrashcomics.com/drd_mainframe.htm - click "graphix", then "paints"; the painting in question is the third image, and you get to it by clicking on the current painting.

Yes, I wish I could talk him into a more sensible organization for his site, but he just doesn't listen to me. *sigh*