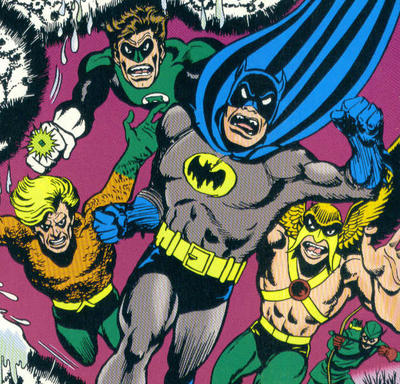 Thanks to you, I am now having flashbacks to the SUPER POWERS limited series my little brother bought in the mid-'80s, from that period where, with no other place to put Kirby's Fourth World, DC had Darkseid replace the Legion of Doom on Super Friends. I suppose I should be grateful you didn't include any images of his frightful rendition of Wonder Woman.

"These Fourth World characters suck because they're not as mind-numbingly cool as Aquaman and Ultra the Multi-Alien."

The faces aren't quite squat enough.

All of Kirby's characters look like those collossal Olmec stone heads from Central America.

Tell me this doesn't look like a Kirby gallery. The one labeled "Monument A" looks like an angry Kirby Invisible Girl.

I know you hate Kirby, but this post is not fair! Kirby only did the JLA at the very end of his career, when his artistic powers were certainly not at their peak. His Superman in Jimmy Olsen was perfectly fine (even if DC did needlessly have the heads redrawn by Plastino).

If you want to see some REAL awful JLA, look at any JLA book by Howard Porter! His faces don't look like people, and he has no grasp of anatomy. You an rarely tell what's going on in any panel.

And Monument 04 is clearly the ever-lovin' blue-eyed Thing!

Why is a Dick Dillin cover an example of Kirby drawing the JLA?

If you have to explain the joke, then it's not worth doing so...!

Finally, some one who agrees that Howard Porter's JLA was "rubbish". It was so bad I often find it difficult to articulate my thoughts on the subject, as a red mist descends and screws up my sentence structure.

Robby, you've made my day!

The worst part were the eyes - they never looked at what they were meant to be looking at.

Oh, and Kirby is poor to!