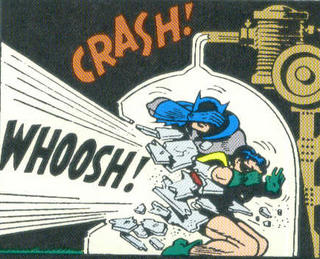 As established in previous posts, Batman and Robin are not Perfectly Ordinary Americans.

Perfectly Ordinary Americans do not find themselves trapped in giant bell jars, nor do they engage in conversations like...

"Gosh, Batman, how will we escape this giant bell jar that we find ourselves trapped in?"

"There's no time for me to cut through the container with the Tiny Oxy-Acetylene Torch that I carry in my utility belt, Robin, because giant human-capturing bell jars have been vastly improved since I was trapped in one during the Case of the Chemical Syndicate (Detective No. 27), and using it would only accelerate the rapid depletion of our remaining supply of oxygen, which is already dangerously low due to my excessive exposition."

"Burrito? That's it, Robin, you've done it again! While I can't use my Tiny Oxy-Acetylene Torch to cut us out, I can use it to blast us out by igniting the noxious methane-based gas mix you customarily spout from your youthful bunghole. When I give the signal, hold your nose like this and flatuate, Robin; flatuate as you've never flatuated before!"

"Quick, Robin - get out the Bat-Sylvia Plath!"

Did I just read the words "youthful bunghole" in a blog?!?!

In retrospect, I should have written "youthful CRIMEFIGHTING bunghole".

That would seen more respectful, I think.

This explains why Robin had to wear the chainmail panties. At last, it makes sense!

Those had to chafe.