Villains United (except for their body parts) 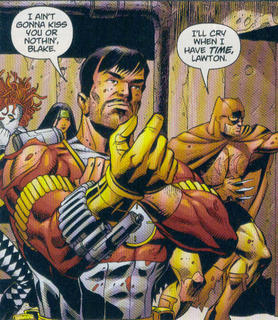 Geez, you two, just get a room already!

Just when you thought the budding homoerotic relationship between Catman and Deadshot (pointed out so accurately by my fellow members of the Gay Bloggers Union at So So Silverage) couldn't get any steamier, we discover this week that Deadshot insists on doing it without all that "mushy stuff" (probably insists on wearing the mask!). Have you ever seen a couple so afraid of their softer sides? Pathetic. Between these two and the Ragdoll / Parademon couple, we're closer to the Fab Five than the Secret Six!

Anyway, as So So Silverage points out plenty to enjoy in this week's comics! So much I can't put it all in one post.

It's the little things that I love about this title, and I don't just mean Dr. Psycho! Things like "Metropolopoly", Ragdoll's tendency toward polite understatement, Tysonization as a method of attack (Fatality is really bad at keeping her body parts), the ease with which Schickel-goober Captain Nazi is played, and the Single Greatest Use of the Injury to the Eye Motif since the Comics Code was lifted (and it couldn't have happened to a nice guy).

Still, in a book full of broken arms and damaged sense organs, the most disturbing thing was the conversation between Luthor and Black Adam. We finally see that Black Adam is severely naive and easily disillusioned, underscored by Val Semieks' visuals wherein it's suddenly clear how much Black Adam looks like Captain Marvel. Wow.

One question though; isn't Knockout oddly squeamish for a former Female Fury? That's just out of character, Simone!
Posted by Scipio at 1:31 PM

Knowing Knockout as a Superboy villain from the 90's, I'd say it's within her character to be a bit unnerved by senseless violence.

She's great at beating the tar out of people, but brutality for brutality's sake was never her style.

Yeah, I agree with Amy.

Knockout was enough of a good guy that she would not be down with this brutality without SOME qualms.