As anyone reading Villians United knows, the re-invented Cat-Man is the sensational character find of 2005. Cat-Man's original shtick had been a cape of questionable magical properties that granted him nine lives, and an unhealthy fixation on Batwoman (*snort*), so when she fell from public view, so did he. He had the chance to die a couple of times before then; fell into a cataract, hit a buoy with his speedboat. You know, fun "watery grave" stuff that lets you bring villains back later. Why, the Joker "falls to his death" into the water so much, Aquaman made him an honorary citizen of Atlantis. But I digress...

Wacky Bob Rozackis, his mind affected by breathing the fumes that back issues emanate, brought Cat-Man back in 1977 to fight the Freedom Fighters in Minneapolis. Scary; don't think about it.

Then Len Wein used him in 1980 in a Catwoman story, during one of her "good girl" periods, where he tried to frame her for his crimes. Another great Cat-Man water death; falls into a live geyser. Yowtch.

Society's enemy Gerry Conway (*shudder*) brought CM back a year later in a follow-up, another face off against Catwoman. This time he fell off his yacht and into the bay, from which he had to be rescued because he "couldn't swim". I'm sure Ger thought that was so darned cute (cats can't swim, har har har!) that it was worth ignoring the 14 or 15 previous times Cat-Man survived a watery grave. Dork.

For an "obscure villain," Cat-Man has been remarkably busy. He worked for the Joker against Killer Croc (who killed him ... well, almost). Later he broke into the Batcave, believe it or not. He worked for Brainiac during Crisis (1985). He worked for Ra's (1986). He fought Manhunter Mark Shaw (1987). He tangled with Catwoman (1990). He kidnapped the mayor of Gotham (1992). He fought Catwoman (again!) and the Cat-Cult he stole his magic cape from (1995). He told Neron to buzz off (1995). He fought G'Nort (1998). [Not many characters could tell off Neron AND fight G'Nort; Cat-Man is astonishingly versatile.]

More recently, when the Gotham earthquake hit, he hoodwinked the KGBeast during a prison break-out and escaped by swimming away. Must get that issue and mail it to Conway. Fought Black Condor II in Opal City. In JSA #28, he's in the audience at Roulette's House. Yeesh, Cat-Man is a more frequent "special guest villain" than Burgess Meredith!

Then, during his run on Green Arrow, Brad Meltzer re-introduced him as a washed up loser and wife-beater (Hi, Brad!). Brad's unflattering portrayal of CM was the last straw for the angry Cat-gods, it seems, who commanded DiDio et al. to MAKE CAT-MAN COOL. Not "cool again"; Cat-Man had never been cool before. He was always just another villainous "rip-off" of Batman. Or WAS he...?

In fact, Cat-Man is a copy of another hero entirely: Cat-Man. 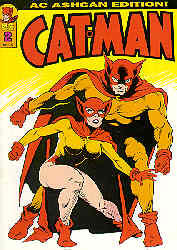 The original Cat-Man was a Golden Age hero with 33 issues of his own comic published during 1940-1946. He was created by Holyoke Publications, whose company unheavals resulted in a complex numbering system for Cat-Man issues, comprehensible only to people like long-time Legion fans.

Cat-Man was your standard sock-'em-in-the jaw kind of guy, in a jarring reddish-orange and yellow costume that looked, well, exactly like DC's Cat-Man. He was Army captain David Merrywhether, who, abandoned in the jungle as an infant, had been raised by tigers. No, really. Naturally, this gave him felinified powers and abilities. It's a comics thing.

The Cat-Man Comic was notable for three reasons. (other than the eye-stabbing brightness of his costume). 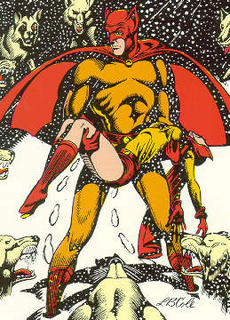 First, Cat-Man had a female sidekick named, of course, "Kitten" (*snicker*!). She was his, um, "female ward", Katie Conn. Rrowwr!

Second, his comics had gorgeous cover art, courtesy of Puerto Rican artist Alex Schomburg and L.B. Cole (see illustration at right), which has made the Golden Age rarities pricey acquisitions.

Now, none of this should be confused with the 1950s Australian comic, Catman, who looked exactly like the love-child of the original Cat-Man and the Golden Age Starman (what DRAMA!).

Anyway, if modernized ultra-cool (and, I might add, disturbingly studly) Cat-Man doesn't get a sidekick named "Kitten" by the end of the year, I'm going to be mighty disappointed!
Posted by Scipio at 7:23 AM

Having a sidekick nammed 'Kitten' just skips past subtext and goes straight into creepy/cool.

Gets better, DVS. The rights to Cat-Man fell to AC Comics (don't ask how), and he appeared in

Along with the Green Llama.

God, I love this country!

If things don't work out in the "Kitten" department, maybe Pussy Galore is looking for work...

Dropped in via a million links. I'm that shadow in the corner. Your blog is crazy. Love it. I'm stealing all your lines, because they're gold.

Shouldn't a rediscovery of Clock King be around the corner?

Actualy, Clock King already IS enjoying a renaissance, of sorts. On JLU, he was the tactical coordinator of Task Force X (the Suicide Squad).

Didn't Clock King show up in Chase too?

Oh and how come there isn't a Dog Girl with sidekick Puppy Lad?

VERY VERY cool stuff, and thanks for linking all of it.

We tried to make Catman's colors into more like lion colors, with the darker representing the darker hair of a mane. Sometimes it looks great, sometimes it still looks a bit dicey.

Actually, I think Cat-Man's costume ALWAYS looks great. He's obviously not afraid to stand out (as the Society has learned!) and his costume makes that clear.

They didn't. While AC Comics own "Catman" and "Catman and Kitten" trademarks, the copyright lapsed into public domain long before AC Comics started using the character. So, technically, anyone (even DC Comics) can do stories based on the original Catman (or republish the original Golden Age stories) - they just can't publish a comic which has "Catman" in it's title.